Mia Farrow leads a march in a torch relay in support of Darfur to the Chinese Embassy in Washington, in this Dec. 10, 2007 (Photo: Associated Press) 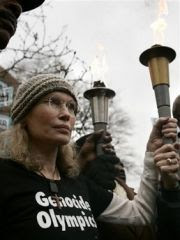 George W. Bush made a point of shedding a photogenic tear over the holocaust during his visit to Israel earlier this month. In a Letter to the Editor of the Cincinnati Enquirer, Sarah Weiss, Executive Director of the Center for Holocaust and Humanity Education put Bush's display in context:

When President Bush visited the Yad Vashem Holocaust Memorial, he shed tears and publicly acknowledged that America should have bombed Auschwitz in 1944, an act that would have saved many lives ("Bush moved to tears at Holocaust Memorial," Jan. 12).
However, Bush has the power today to spare the people of Darfur of a similar fate in history.
We must go beyond mourning and be compelled by the history of the past to take action today to end the current genocide in Darfur.
To honor the victims of the Holocaust and past genocides, I urge you to write the White House and ask Bush to remember his commitment in Darfur. Cincinnati Enquirer, 1-18-08

Just yesterday, in the White House, Bush complained that "international efforts to address violence in Sudan's Darfur region were moving too slowly," and said that "the United State would push to accelerate the process." (Reuters, 1-18-08)

Well, perhaps the approaching end of his two terms in office will motivate him.

Meanwhile, Mia Farrow and George Clooney have done more for the people of Darfur than Bush has in the years he has occupied the Oval Office.

Yes, Mia Farrow and George Clooney have done more than the leader of the most powertful nation on Earth.

Here is the latest on their heroic efforts --

Cambodia has barred U.S. actress Mia Farrow and a group campaigning for an end to atrocities in Sudan's Darfur region from lighting a symbolic Olympic torch at a "Killing Fields" memorial site.
Interior spokesman Khieu Sopheak said on Thursday police would "take measures" to prevent Dream for Darfur holding a ceremony this weekend at Tuol Sleng, the Phnom Penh school that became the Khmer Rouge's main torture and interrogation centre.
Dream for Darfur has already held similar events in Chad, Rwanda, Armenia, Germany and Bosnia as part of a campaign to persuade China to push Khartoum into ending the violence in Darfur, where 200,000 people have been killed since unrest broke out in 2003. ... An estimated 1.7 million people died under Pol Pot's 1975-79 Beijing-backed regime, which emptied the cities in bid to turn the country into a peasant utopia. Victims were tortured and executed, or died from starvation, disease and overwork.
China is a major supplier of military aid to Sudan and purchaser of its oil, giving Beijing the clout to push Khartoum to halt the violence in Darfur, critics say. Reuters, 1-17-08

UN chief Ban Ki-moon has picked Hollywood heart-throb George Clooney, a passionate advocate for an end to war and famine in Sudan's Darfur region, as the world body's latest Messenger of Peace, an official said Friday.
The Oscar-winning US actor was recognized for his tireless efforts to focus public attention on key international political and social issues, said UN spokeswoman Michele Montas.
Clooney joins eight other internationally renowned individuals chosen to campaign for the UN drive to improve the lives of billions of people around the world. ...
"You have seen first-hand the pain experienced by the victims of war and made it your personal mission to help end violence and human suffering," Ban said as he lauded Clooney's "dedication to raising awareness and mobilizing action on Darfur."
"I am deeply honored to receive this appointment," Clooney said. "I look forward to working with the United Nations in order to build public support for its critically important work in some of the most difficult, dangerous and dire places in the world." Agence France Press, 1-18-08