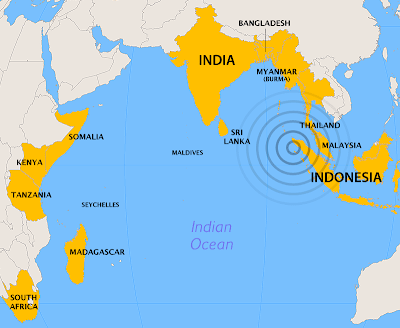 Costas Synolakis of the University of Southern California Tsunami Research Center and Emile Okal of Northwestern University have co-authored a study entitled "Far-Field Tsunami Hazard From Mega-Thrust Earthquakes in the Indian Ocean." The study offers up eight scenarios for Indian Ocean earthquakes and resultant tsunamis. Its release underscores the sad fact that the goverments of the world have not come to grips with the lessons of the 2004 Indian Ocean earthquake and tsunami. -- Richard Power

Among the paper's conclusions:
- The impact in the mid-ocean Maldive Islands from all scenarios appears to be similar or less than what was observed in 2004 - however the low-lying structure of the islands makes them more difficult to evacuate than other risk sites..
- The impact in Madagascar and the Mascarene Islands (Mauritius, Rodrigues and Reunion) and the Seychelles could be far greater than in 2004, particularly from earthquakes in Southern Sumatra and in South Java. Madagascar is found particularly vulnerable from South Sumatran tsunamis.
- Africa suffered in excess of 300 deaths in 2004, 300 of them in Somalia. Its east coast is vulnerable from south Sumatran tsunamis and in particular, Somalia remains at high risk due to the focusing effect of the Maldives ridge. The Comoro islands located between Tanzania and Madagascar would probably be affected more severely than in 2004.
- Large earthquakes in south Java would generate substantial levels of destruction in Northern Australia, despite the sparse level of development there.
- The Strait of Malacca area appears more vulnerable than in 2004, from earthquakes in the North Andaman. Bali and Lombok and could be severely affected by large events in south Java. In fact Bali was affected by the 1994 tsunami, whose trigger was smaller than the ones envisioned here.
- The Kerguelen Islands (49.5?S; 69.5?E), part of the French Southern and Antarctic Territories, are highly vulnerable. Other than the North Andaman scenarios, practically all other events affect the Kerguelens, where apparently the 2004 tsunami did not cause damage. The much larger offshore heights the simulations predict would put the scientific base there (60-100 persons) at risk.
Many of these scenarios have never been examined before. ...
"It is quite clear that a tested and true tsunami early warning system as now works in the Pacific by the Pacific Tsunami Warning Center needs to be urgently implemented in the Indian Ocean," said Synolakis. "This system should include hundreds of pre-computed detailed scenarios of inundation for all Indian Ocean nations to facilitate emergency planning for evacuation should any of these scenarios materialize. Public education is a must and local people and visitors should be made aware of tsunami hazards, no matter how unlikely they may be, just us Hawaii and Oregon are already doing." Making (Accurate Predictions Of) Waves, Terra Daily, 1-29-08

Hard Rain Journal 7-14-06: Tsunami Threat to Hawaii and West Coast Underestimated, Is Your Organization Prepared in Any Way, Shape or Form?

GS(3) Thunderbolt: Travel Security Lessons from the Upheaval within the Ring of Fire