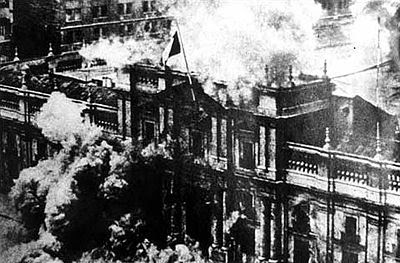 La Moneda Presidential Palace being bombed during the coup (1973)

Tragically, a similar television poll in the USA named Ronald Reagan "the greatest American in history." Yes, that's right, Ronald Reagan, the original frontman for the rape of the US psyche and the plundering of the US economy -- not Thomas Jefferson, not Abraham Lincoln, not Martin Luther King. How sad.

Well, in Chile the oppression was naked and smash-mouth, here it has been carried out with mind-bending TV and reich-wing radio.

Hopefully, now that the Milton Friedman cult's delusional economic theory has caved in on itself and the neo-con's geopolitical wet dream has turned into a nightmare of isolation and weakness, this great nation will break out of its delerium and enter into the reality of life on this planet.

The Chileans will welcome us, and perhaps even forgive us.

The late socialist President Salvador Allende, who was overthrown by the armed forces on Sept. 11, 1973, was elected the "greatest Chilean in history" in a viewers' poll organised by a television programme that stirred up controversy.
The series "Great Chileans in History," broadcast by the state channel TVN, concluded ...
Allende's first place in the television poll "means that the efforts of the dictatorship, and the social and political sectors that supported it, to systematically discredit and denigrate his memory, as well as the shameful attempts by governments in power since 1990 to hide his achievements, have been unsuccessful," Chilean historian Sergio Grez told IPS.
"The continued relevance and popularity of Allende in Chile today can be explained not only by his heroic death, but also by the large numbers of Chileans who continue to cherish dreams and plans for major social changes that include many aspects of Allende’s programmes," said the University of Chile professor.
"Unlike other figures in national and world history, Allende has not been diminished in death. On the contrary, his stature has grown, in spite of the 'collapse of the walls' and the 'end of history' announced by some talking heads," Grez said. Daniela Estrada, CHILE: Salvador Allende - Greatest Chilean, by Popular Acclaim, Inter Press Service, 9-19-08