As the Oil Industry Waterboards Our National Psyche with the Gulf Eco-Catastrophe, Isn't It Time to Choose the Real World Over "Real Politik"?

These photos are from CODEPINK's Flickr album "bp houston action 040" 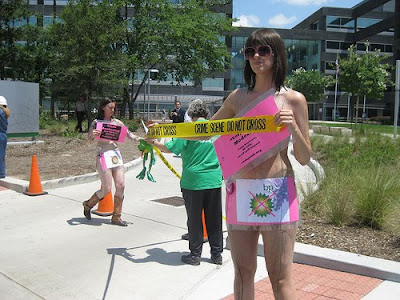 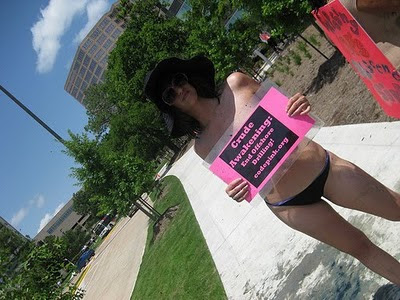 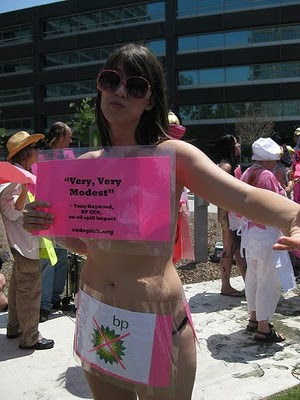 If BP fails to plug its ruptured offshore oil well, intense underground pressure would be enough to pump vast quantities of thick brown crude into the Gulf of Mexico for months, even years. If even BP's backup plans fail, it would cause a pollution disaster "heretofore unseen by humanity," said one expert. The Hill, 5-26-10

The truth is that there’s not much more that President Obama can do to stop the eco-disaster now hitting the Gulf of Mexico. But his response to our fossil fuel-driven crises — so far — can still be deemed grossly inadequate. That’s because the Gulf spill is actually one of two environmental catastrophes now unfolding, and Obama doesn’t seem to understand how they are related. Climate Progress, 5-26-10

Thirty years of conservative message dominance is a function of the right's ability to master outrage. Now is the time for Democrats and progressives to muster (and master) the kind of outrage worthy of this calamity. Peter Daou, Huffington Post, 5-23-10

As the Oil Industry Waterboards Our National Psyche with the Gulf Eco-Catastrophe, Isn't It Time to Choose the Real World Over the False Meme of "Real Politik"?

I am grateful to the women of CODEPINK.

In their recent action outside the BP offices in Houston, these brave activists manifested an urgency and directness appropriate to the current emergency.

Looking for a creative way to expose the company's criminal behavior (and entice the media, who rarely cover protests in Texas), Diane was inspired by the example of a group of women from Nigeria who took over a Chevron oil rig and threatened to strip naked if the company didn't hire more local workers and invest in the community. Faced with just the threat of nudity, Chevron gave in. "If the Nigerian women could use their bodies on the Niger Delta, why can't we do it in downtown Houston?" Diane reasoned. Media Benjamin, Common Ground, 5-28-10 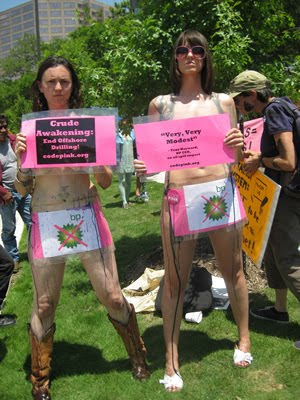 Meanwhile, the U.S. military suffered its one thousandth death in Afghanistan this last week; a U.S. Marine on foot patrol in Helmand province. For what? The so-called "war on terror," that foolish adventure in which we battle on against an enemy that we also embrace as our ally?

Well, there is another answer, even more absurd, that has presented itself this Memorial Day:

KIRCHNER: I said that a solution for the problems right now, I told Bush, is a Marshall Plan. And he got angry. He said the Marshall Plan is a crazy idea of the Democrats. He said the best way to revitalize the economy is war. And that the United States has grown stronger with war. Think Progress, 5-28-10

Ignorance and malevolence make for a lethal cocktail.

And yet, no federal prosecutor will move against Bush or Cheney; no congressional hearings worthy of the heritage of Watergate or Iran-Contra (featuring Kirchner as a star witness) will be convened. Indeed, it will not even be mentioned on ABC This Weak in Revision, CBS Fork the Nation, NBC Meat the Press or CNN Lost Edition.

It is the also same illness that allowed Rwanda in the 1990s, and Darfur now.

The story of U.S. policy during the genocide in Rwanda is not a story of willful complicity with evil. U.S. officials did not sit around and conspire to allow genocide to happen. But whatever their convictions about "never again," many of them did sit around, and they most certainly did allow genocide to happen ... Policy analysis excluded discussion of human consequences. "It simply is not done," the authors wrote. "Policy—good, steady policy—is made by the 'tough-minded.' To talk of suffering is to lose 'effectiveness,' almost to lose one's grip. It is seen as a sign that one's 'rational' arguments are weak." Samantha Powers, Bystanders to Genocide, Atlantic, 5-30-10

According to Norwegian Refugee Council’s Internal Displacement Monitoring Center, the number of Sudanese displaced has reached 4.9 Million. Yet, the US government watches in silence as Al-Bashir’s inauguration is scheduled for May 27, 2010.
Khartoum has continued with business as usual, while many have repeatedly protested the outcome of the recent elections. Darfur and South Sudan has seen a substantial increase in violence leaving several hundred dead. Alysha Atma, Salem-News, 5-21-10

(Arguably, our appetite for colton, oil and other resources has resulted in the loss of ten million African lives in Congo, Rwanda, Sudan and Uganda in recent decades.)

It is the same illness that blinds us to the ugly realities of "global free trade." Despite Tom Friedman's lullaby, the evidence is all around us -- not only in our own abandoned factories, but also across our southern border, in the devastated farmlands of Mexico, and as far away as the hell-realms where Silicon Valley's coolest technologies are assembled by Chinese laborers.

A series of apparent suicides has shaken the management of Foxconn, an electronics manufacturer that builds parts and assembles products for many Silicon Valley firms. Hundreds of thousands of people live and work at a Foxconn factory complex in southern China, in what critics say are sweat-shop conditions ... They build cult products for global digital brands like Apple, Nintendo and Dell, ranging from the iPhone and iPad to the Notebook. Der Spiegel, 5-28-10

So what is this illness?

Clinging to the false sense of separateness; and all that flows from it, e.g., fear, greed, violence.

And what is its antidote?

Opening up to the oneness of all life; and all that flows from it, e.g., reason, compassion, humor.

From Gautama Buddha to Albert Einstein, whether the healing was framed as spirituality or science, this truth has blazed relentlessly, and we are its mirrors and its handmaidens.

Isn't it time to eschew the false meme of "Real Politik" and embrace the Real World imperatives of universal sustainability and human rights instead?

What have we got to lose?

Everything is being taken from us. 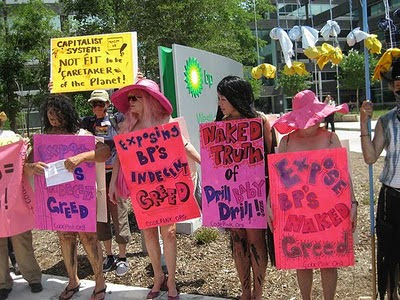