Time to View the Political Spectrum Not from Left to Right, But from Science to Superstition, & from Reason to Madness 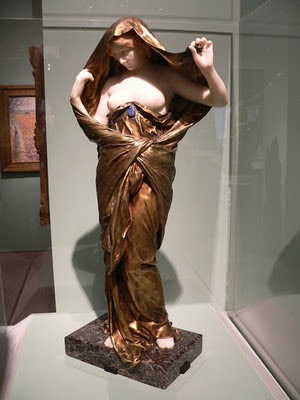 The researchers dug up snow from decades past ... they found so-called micro- meteorites — tiny specks just a fraction of a millimeter across that nonetheless carry important clues to the birth and evolution of the solar system. Scientific American, 5-6-10

We have met Neanderthals, and they are us – or about 1 to 4 percent of each of us. That is one implication of a four-year effort to sequence the Neanderthal genome – essentially setting out in order some 3 billion combinations of four key molecules that together represent the Neanderthals' genetic blueprint. Christian Science Monitor, 5-6-10

A European telescope has discovered a star nearly ten times the size of the sun ... According to current scientific views, stars cannot become bigger than eight times the size of the sun. Vast quantities of gas and dust surrounding the young star mean it could become hundreds of times bigger, forming one of the brightest objects in the Milky Way. Radio Netherlands, 5-6-10

Time to View the US Political Spectrum Not from Left to Right, But from Science to Superstition, & from Reason to Madness

Meanwhile, this week, in the Gulf of Mexico, BP's effort to use a giant dome to contain its underwater volcano of oil has failed.

Looks like this cup will not pass from us.

Humanity needs both renewed hope and purposeful courage at this stage of its experiment in "civilization."

There is hope in these three stories of science as revelation, from the strands of Neanderthal in human DNA, to particles of interstellar dust in the ice of the Antarctic, to an evolving Milky Way sun, already larger than anything previously thought possible; hope that science and creative imagination are arriving at the same miraculous moment, just as the quantum physicists have already found themselves listening to the same song as the ancient Taoists.

Have you read Jean Aule's powerful Clan of the Cave Bear? Well, now the Christian Science Monitor says, "A few anatomically modern humans mated with Neanderthals, likely in North Africa or the Middle East as modern humans initially were moving out of Africa."

In Radio Netherlands' report that the Europeans have discovered an "impossibly huge star," there is even more promise. In the mystical traditions of the East and West, there is reference to the planets and stars as beings in and of themselves, i.e., actually super-consciousnesses, higher intelligences, composed of all the individual consciousnesses within them. Each planet and moon within our solar system is alive, and conscious -- in some way incomprehensible to us -- yet. The solar system itself, in turn, is alive and conscious, again, in a way wholly beyond our capability to grasp intellectually - yet.

Well, if everything is alive in the vastness of space-time, if all is consciousness, then we are free to enjoy a very different perspective both on the challenges before us, and on the resources upon which we can draw in overcoming them.

It is in wonder that hope renews itself; and it is in facing the abyss, that courage finds its purpose.

I suggest that it is time to view our political spectrum, not from left to right, but from science to superstition and from reason to madness.

On this spectrum, compromising, meeting in the center, "triangulating," does us no good.

At one end of the spectrum, there is Sarah Palin speaking to Bill O'Reilly on Rupert Murdoch's dime:

“I think we should keep this clean, keep it simple, go back to what our founders and our founding documents meant,” adding, “They’re quite clear that we would create law based on the God of the Bible and the 10 commandments, it’s pretty simple.” (Faux News, 5-7-10)

It is, of course, historical fact that Jefferson, Paine, Washington, Franklin and others among the Founding Fathers were Deists; they were not Christians, and their view was that Nature was divine and that science and reason were vital elements of its revelation. It is also historical fact that the separation of church and state was fundamental to the U.S. Constitution, in both its essence and its form.

Palin and others who espouse such nonsense, whether in more sophisticated framing or not, show as much ignorance about the historical context and motivation behind the Boston Tea Party (which was an anti-corporatist act of civil disobedience) as they do about the Book of Revelations (which was a poetical text of a particular style, used by its author to address the issues and circumstances of his own time).

At the other end of spectrum, there are those who courageously champion reason and science, those who have diligently done the math, and those who patiently uphold common sense.

Here are some of the voices of courage at this moment of national and global crisis:

Gore on BP disaster: “This is a consciousness-shifting event. It is one of those clarifying moments that brings a rare opportunity to take the longer view. Unless we change our present course soon, the future of human civilization will be in dire jeopardy.” Climate Progress, 5-8-10

The absence of an acoustical regulator -- a remotely triggered dead man's switch that might have closed off BP's gushing pipe at its sea floor wellhead when the manual switch failed (the fire and explosion on the drilling platform may have prevented the dying workers from pushing the button) -- was directly attributable to industry pandering by the Bush team. Acoustic switches are required by law for all offshore rigs off Brazil and in Norway's North Sea operations. BP uses the device voluntarily in Britain's North Sea and elsewhere in the world as do other big players like Holland's Shell and France's Total. In 2000, the Minerals Management Service while weighing a comprehensive rulemaking for drilling safety, deemed the acoustic mechanism "essential" and proposed to mandate the mechanism on all gulf rigs. Robert F. Kennedy, Sex, Lies & Oil Spills, Huffington Post, 5-5-10