Her Chestnut Tree has Fallen; Economic Insecurity Spiraling Downward to a Bottomless Pit Caused the Madness from which Anne Frank Fled into that Attic 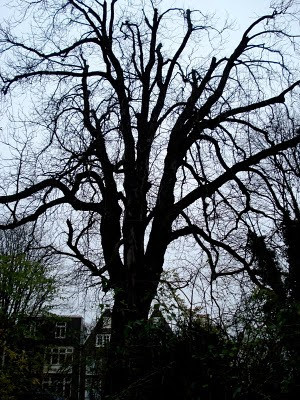 Nearly every morning I go to the attic to blow the stuffy air out of my lungs. From my favorite spot on the floor I can look up at the blue sky and the bare chestnut tree, on whose branches little raindrops shine, appearing like silver, and at the seagulls and other birds as they glide on the wind. Diary of Anne Frank, 2/23/44

"Beauty is truth, truth beauty" -- that is all ye know on earth, and all ye need to know. John Keats, Ode On A Grecian Urn

Her Chestnut Tree has Fallen; Remember, Economic Insecurity Spiraling Downward into a Bottomless Pit Caused the Madness from which Anne Frank Fled into that Attic

Yes, the chestnut tree outside the attic where Anne Frank hide from the S.S. has finally fallen; not from the axe of a neo-Nazi or the explosives-laden vest of a jihadist, but from more or less natural causes.

All things pass away ...

But the truth endures, everlasting.

Unfortunately, its enemies, although not eternal, are seemingly perennial.

For example, horror did not departed this world when the death camps of Eastern Europe were liberated.

Nearly 200 women and four baby boys were gang-raped by Rwandan and Congolese rebels in a brazen attack near a UN peacekeepers' base, aid workers have reported. Guardian, 8-24-10

And here in the USA, which once upon a time was, arguably, the Age of Reason's sweetest fruit, even and especially here, ignorance and superstition have proven virulent and lethal. The U.S. bishops, seemingly unable come to grips with pedophilia within the clergy, have successfully petitioned a Reagan-appointed, jelly-bean anointed judge to disrupt the life-affirming course of science

A federal district judge on Monday blocked President Obama's 2009 executive order that expanded embryonic stem cell research, saying it violated a ban on federal money being used to destroy embryos. The ruling came as a shock to scientists at the National Institutes of Health and at universities across the country ... The court order, delivered by a notoriously conservative Reagan appointee, seems intent on turning back the clock many years. Steve Benen, Political Animal, Washington Monthly, 8-24-10

Understanding the secret life of the forest, I know that the falling of a tree is always a moment of great power as well as an omen of some change for better and/or worse.

Remember, the madness from which Anne Frank hide in that attic took hold of a society in the throes of economic collapse and geopolitical defeat.

Our deeply troubled economic and geopolitical circumstances are not all that different from those of the Weimar Republic; and there is little confidence that our collective decisions will be any less catastrophic.

Three in particular preoccupy me in the shadow of that fallen tree: the great obscenity, the great lie and the great shame.

What will we do about the great obscenity of Bush's surplus-busting tax cuts?

What’s at stake here? According to the nonpartisan Tax Policy Center, making all of the Bush tax cuts permanent, as opposed to following the Obama proposal, would cost the federal government $680 billion in revenue over the next 10 years ... And where would this $680 billion go? Nearly all of it would go to the richest 1 percent of Americans, people with incomes of more than $500,000 a year. But that’s the least of it: the policy center’s estimates say that the majority of the tax cuts would go to the richest one-tenth of 1 percent ... And the average tax break for those lucky few — the poorest members of the group have annual incomes of more than $2 million, and the average member makes more than $7 million a year — would be $3 million over the course of the next decade. Paul Krugman, New York Times, 8-23-10

What will we do about the great lie that says Social Security is broke and breaking us?

President Obama’s Deficit Commission is all smoke and mirrors. Its members are making a big show of laboring over ”painful” choices and considering all options in their quest to bring down the deficit. But inside the Beltway everyone knows what’s going to happen: The commission will reduce the deficit on the backs of the old and the poor, through cuts to Social Security, Medicare, and Medicaid. Some opponents have taken to calling it the Cat Food Commission, since that’s what its victims will be forced to eat once the commission gets done slashing away at their modest entitlements. James Ridgeway, This Can't Be Happening, 8-23-10

(There is nothing wrong with Social Security that could not be fixed by having the wealthiest pay the same percent of their income into the system as the most hard-pressed already pay into it. And although the Deficit is huge, and dangerous, it is not the greatest threat we face, and it could be addressed in many ways other than incrementally dismantling our all too meager social safety net, e.g., rethink our national security strategy in a revolutionary way.)

What will we do about our great shame, i.e., that the 1960s War on Poverty was replaced by a long War on the Poor, one that has intensified with each decade since the Reagan Counter-Revolution took the White House in 1980?

Parental neglect, racial discrimination and an orgy of self-destructive behavior have left an extraordinary portion of the black male population in an ever-deepening pit of social and economic degradation. The Schott Foundation for Public Education tells us in a new report that the on-time high school graduation rate for black males in 2008 was an abysmal 47 percent, and even worse in several major urban areas — for example, 28 percent in New York City. The astronomical jobless rates for black men in inner-city neighborhoods are both mind-boggling and heartbreaking. There are many areas where virtually no one has a legitimate job. Bob Herbert, New York Times, 8-20-10

If we were to respond with clarity of mind and unconditional love to the obscenity, the lie and the shame, we could let go of that fallen tree with less sadness, and more hope. But if we go the other way, and allow greed to continue its reign, naked except for a few false memes pasted on it like random pages torn from Atlas Shrugged ... well, remember, it was economic insecurity spiraling downward into a bottomless pit that led to the madness from which Anne Frank fled into that attic ... Tell me, do you think there would be a tree left to be seen from the window in that attic?

Yes, but truth abides. And truth is beauty, and beauty is truth.

Posted by Richard Power at 9:11 PM