Maxine Waters Deserves Better, So Do the Oceans, So Does Darfur; But Even Burkino Faso's 55K New Latrines Aren't Enough to Rid Us of Greed & Cowardice 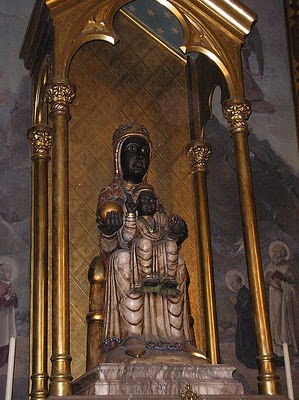 The oceans are the lifeblood of our planet and plankton its red blood cells. Those vital "red blood cells" have declined more than 40 percent since 1950 and the rate of decline is increasing due to climate change, scientists reported … Stephen Leahy, IPS, 7-31-10

“What’s happening with the planet’s climate right now needs to be a wake-up call to all of us, meaning all heads of state, all heads of social organizations, in order to take a more energetic approach to countering the global changes to the climate.” That’s [Russian President] Dmitri Medvedev ... in 14 regions of Russia, ”practically everything is burning” And so we have Hell and High Water, with Pakistan’s record flooding displacing millions: “The disaster has killed 1,200 people and there are fears that the death toll will rise steeply ... Climate Progress, 8-1-10

Maxine Waters Deserves Better, So Do the Oceans, So Does Darfur; But Even Burkino Faso's 55K New Latrines Aren't Enough to Rid Us of Greed and Cowardice

Isn’t it ironic? The Chamber of Horrors spent over $30 million on the 2008 elections; in 2010, emboldened by Citizens United v. FEC, its is going to spend over $70 million (& don't forget many tens of millions more from the shadowy slush funds of Karl Rove and Haley Barbour). And yet, it is Maxine Waters (D-CA.), one of the most heroic leaders in the U.S. House of Representatives (see the inspiring You Tube clips below) that is facing "trial" in the House for an “ethics” violation. You can be certain that none of that Chamber of Horrors money (or that Rove and Barbour money) is going into her campaign coffers.

It's not hard to figure out why the allegations against Maxine Waters seem bogus. You simply need to read the 80-page House Ethics Report carefully. In order to concoct a case against her, the authors of the report twisted the meaning of the House Ethics rules and embellished the underlying facts. David Fiderer, How the Charges Against Maxine Waters Were Fabricated Out of Next to Nothing, Huffington Post, 8-3-10

Yes, something is terribly wrong here, and no one, including and especially our well-intended POTUS, seems to be able to do much about it.

In 2008, I articulated four looming deadlines that were vital to the future of the nation and the planet: the US election in November 2008, the December 2009 UN conference on Climate Change in Copenhagen, the achievement of the UN Millennium Development Goals (MDG) by 2015, and the rescue of Darfur, a deadline years overdue, and missed anew with every evening that the sun sets on that hell.

Only one of the four deadlines I identified has been met successfully. The Obama administration, however disappointing to progressives, is profoundly different than one led by the shell-of-a-man-formerly-known-as-John-McCain, and Sarah Palin, the disturbed, ignorant woman he chose to elevate to the national scene.

Two of the other three deadlines, i.e., Copenhagen and Darfur, have been missed by wide margins, and in shocking fashion.

The consequences are dire, both for conscience and for our civilization.

The International Criminal Court (ICC) recently issued three unprecedented charges of genocide against al-Bashir, the strong man in Karthoum (“the first time the Hague-based court has accused a sitting head of state of committing the most egregious international crime”)

So what was the response of President Barack Obama’s special envoy for Sudan, former Air Force General Scott Gration? “The decision by the ICC to accuse Sudanese president Omar al-Bashir of genocide will make my mission more difficult….” This seems an extraordinarily cynical response to a critical moment in the effort to end impunity for atrocity crimes, precisely the impunity that sustains human suffering and destruction in Darfur … With no background on Sudan, no diplomatic experience, a perverse stubbornness, and a fundamentally flawed negotiating premise, Gration has failed and survives in his position only because President Obama—with whom he reportedly has a very close relationship—will not demand his resignation. But for the moment it seems important to contemplate the spectacle of an American diplomat publicly complaining that his job has been made more difficult because an international tribunal has issued an arrest warrant for the crime of genocide. If this is, as some suggest, Obama’s “Rwanda moment,” then he is being betrayed in deepest consequence by his special envoy for Sudan. Eric Reeves, The Annoyance of International, 7-26-10

Meanwhile, the planetary emergency that is the Climate Crisis is well underway, and yet the US political establishment and mainstream news media are still re-arranging deck chairs (quite clumsily, since their eyes are shut & their ears are plugged):

So it wasn’t the science, the scientists, or the economics that killed action on climate change. What was it? The answer is, the usual suspects: greed and cowardice. If you want to understand opposition to climate action, follow the money. The economy as a whole wouldn’t be significantly hurt if we put a price on carbon, but certain industries — above all, the coal and oil industries — would. And those industries have mounted a huge disinformation campaign to protect their bottom lines … By itself, however, greed wouldn’t have triumphed. It needed the aid of cowardice — above all, the cowardice of politicians who know how big a threat global warming poses, who supported action in the past, but who deserted their posts at the crucial moment. There are a number of such climate cowards, but let me single out one in particular: Senator John McCain ... Alas, Mr. McCain wasn’t alone; and there will be no climate bill. Greed, aided by cowardice, has triumphed. And the whole world will pay the price. Paul Krugman, New York Times, 7-25-10

And what of that fourth deadline in my doomed 2008 formulation, achieving the MDG by 2015?

So much that is terrible has happened since the affirmation of the UN MDG in 2000: notably, 9/11, 10 years of deceit and denial about the Climate Crisis, two foolish military adventures (i.e., Iraq and Afghanistan), Katrina, the Indian Ocean earthquake and tsunami, global financial meltdown and economic descent, the slow motion genocide in Darfur, the unthinkable savagery against women in the Congo, the brutal crackdowns against Buddhist monks in Burma and Tibet, the Haitian earthquake, the BP ecocide in the Gulf, and so much more. Under the onslaught of all of this loss, it is difficult to even remember the MDG, let alone imagine that the positive impact of their achievement will not have been negated by all the wrong done, and all the good left undone (particularly in regard the Climate Crisis).

Nevertheless, across the planet, the effort is still pressing forward:

The government of Burkina Faso has embarked on the construction of 55,000 latrines each year to improve access to proper sanitation for the population from the present 10 percent to 54 percent by 2015. According to the authorities, the average rate of access to sanitation in urban areas is currently 20 percent, while in rural areas; it is as low as one percent in some areas. IPS, 7-31-10

Although Burkina Faso’s 55,000 new latrines will not save us; their installation is an evolutionary act, and worthy of celebration.

So what happens now?

It is a time of reckoning.

Is our real problem clear to you yet?

The empires of old are gone, the Cold War is over, yes, yes; but the predators live on, and unchecked, unbridled, unregulated, unchallenged, their appetites have grown insatiable; no longer satisfied by feasting on the resources (human, mineral, etc.) of other lands, they have begun to feed on their own.

David Stockman bombshell: How my Republican Party destroyed the American economy. The "debt explosion has resulted not from big spending by the Democrats, but instead the Republican Party’s embrace, about three decades ago, of the insidious doctrine that deficits don’t matter if they result from tax cuts." Joe Romm, Climate Progress, 8-1-10

Thanks to Randi Rhodes for highlighting this extraordinary 2005 HBO monologue on "The American Dream" by George Carlin: