Welcome to the Crisis that will Shape Reality for the Rest of Our Lives; Past Due Time to Tear Down the Concentric Walls of Ignorance, Fear & Greed 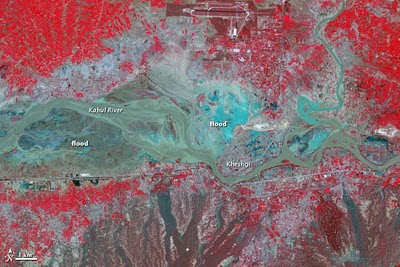 The United Nations ... graphically illustrated how severe the massive floods in Pakistan were by claiming that the number of people who would suffer as a result would exceed the aggregate from three recent major disasters ... worse than the 2004 Indian Ocean tsunami, the 2005 Kashmir earthquake and the 2010 Haiti earthquake combined. NewsTime, 8-9-10 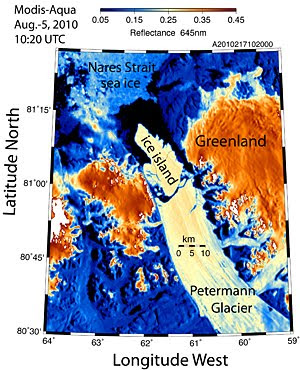 “... an ice island four times the size of Manhattan was born in northern Greenland ... The freshwater stored in this ice island could keep the Delaware or Hudson rivers flowing for more than two years ... could also keep all U.S. public tap water flowing for 120 days...” University of Delaware, 8-6-10

Welcome to the Crisis that will Shape Reality for the Rest of Our Lives; Past Due Time to Tear Down the Concentric Walls of Ignorance, Fear & Greed

The corporatist grip on the collective mind world has become a chokehold.

It has been two years since the electorate "refudiated" Bush, Cheney, and their successors, the-shell-of-a-man-formerly-known as John McCain, and Sarah Palin, the dangerous woman that the shell-of-a-man-formerly-known-as-John-McCain allowed to be elevated to the national scene in his name. And yet, what is spewing out over the air waves is now actually worse than it was at the height of the Bush-Cheney abomination; Faux News is bolder, and more mind-warping than ever, CNN is weaker and more soulless than ever.

Unfortunately, humanity in general, and this great nation in particular, seem to be locked into a devolutionary spiral, instead of an evolutionary one.

Welcome to the Climate Crisis, it will shape reality for the rest of our lives. And yet, too many on the right still deny the truth of what's going on. But perhaps, even worse, too many in the center, and on the left, acknowledge the truth, but refuse to treat it as the planetary emergency it is.

While Beltwayistan and Infotainmentstan distract themselves and delude the body politic, and fritter away this precious time we will never get back ...

Do you understand the significance of this study? Over half of all plant and animal species on this planet inhabit its rainforests.

Here is a link to some wonderful talking points from Climate Progress' Joe Romm, if you feel compelled to attempt to reason with those who are running off into the maze, with their eyes shut and their ears plugged: Rebutting climate science disinformer talking points in a single line, Climate Progress, 8-9-10

Here is a link to a strong, common sense agenda from 350.org's Bill McKibben, if you want to get a head start on picking up the pieces, because, my friends, we are heading for a great crack-up: We’re Hot as Hell and We’re Not Going to Take It Any More: Three Steps to Establish a Politics of Global Warming, Tom Dispatch, 8-4-10

I don't have much more to say at the moment.

A decade of this life has gone by since I started beating this drum.

"Everybody knows this is nowhere."