El Greco, Scourging the Moneychangers from the Temple, also known as Purification of the Temple (c. 1600) 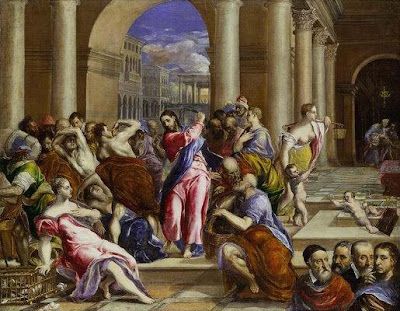 So let me get this straight, corporate money is political speech but citizen's tents and sleeping bags aren't? Yeah, right.

On the night NYPD moved into Occupy Wall Street encampment, the First Amendment (i.e., freedom of speech, freedom of the press, and freedom of assembly to petition for the redress of grievances) was hauled to the land fill in a garbage truck by order of a billionaire who bought himself a third term as Mayor in defiance of a term limit law.

Meanwhile, Joe Paterno and Jerry Sandusky slept safe and snug in their own beds.

Not only did the police, at the orders of billionaire mayor Michael Bloomberg, abruptly move on the protesters, they are alleged to have deliberately kept the press away, which is clearly unconstitutional if true. The US constitution prohibits Congress from restricting the right of citizens to assemble peacefully and to petition for redress of grievances ... The government is also forbidden to interfere with the workings of the free press ... Juan Cole, Informed Comment, 11- 15-11

As police swooped on the park in the early hours of Tuesday, the city closed airspace in lower Manhattan to prevent news helicopters taking aerial shots of the scene. Vans were used to obscure views of the park and a police cordon effectively blocked accredited media from reaching the site. Some of those members of the press who were in the park or were able to get there say they were arrested, pepper sprayed or treated aggressively. Occupy Wall Street: NYPD attempt media blackout at Zuccotti Park, Guardian, 11-15-11

Massive, NON-VIOLENT Evolution holds a mirror up to the Plutocracy; the Plutocracy does not like what it sees, so it smashes the mirror.

Remember those thinkers, like Fukuyama, who declared that "history" had ended back in the 1990s? Ha, ha. No history is still spiraling out from the shadows of the human psyche. It is "time" that has ended (linear time, i.e. an orderly procession from past to future). It was finished with the Mayan Calendar sometime in what we know as October 2011. We are in a quantum universe. We always were, and the shaman have always known it, but all humanity is being made inescapably aware of it now.

That marvelous date 11/11/11 has come and gone. This is a moment of extraordinary opportunity. Choose unbearable beauty. Choose unspeakable truth. Choose invincible love. Choose indefatigable justice. Choose indomitable peace. Of course, this choice is not a choice, it is a choiceless recognition of the primal reality.

Massive, NON-VIOLENT Evolution is manifesting on a planetary level; and one vital aspect, although not the only one, is political struggle.

Here are some beacons in the night that the U.S.A. has lost itself in since the Reagan counter-revolution.

Eighty-four-year-old activist Dorli Rainey spoke to Countdown host Keith Olbermann on Wednesday night after being pepper sprayed by police the previous night during an “Occupy Seattle” protest ... She said a “wonderful” young Iraq veteran protected her during the scuffle with police, preventing her from falling on the ground. Rainey, who grew up in Nazi Germany, expressed her displeasure with the mainstream American media ... “It would be so easy to say, ‘Well I’m going to retire, I’m going to sit around, watch television or eat bonbons,’ but somebody’s got to keep ’em awake and let ’em know what is really going on in this world,” Rainey said. Raw Story, 11-16-11

A popular Hawaiian recording artist turned a top-security dinner of Pacific Rim leaders hosted by President Barack Obama into a subtle protest with a song in support of the “Occupy” movement ... in the midst of the dinner on the resort strip Waikiki Beach, he pulled open his jacket to reveal a T-shirt that read “Occupy with Aloha,” using the Hawaiian word whose various meanings include love and peace. He then sang a marathon version of his new song ... “We’ll occupy the streets, we’ll occupy the courts, we’ll occupy the offices of you, till you do the bidding of the many, not the few.” Agence France Press, Hawaiian singer surprises Obama summit with ‘Occupy’ song, 11-13-11

Occupy Wall Street protesters disrupted a U.S. Chamber of Commerce luncheon featuring the President and CEO of Blue Cross Blue Shield ... The Occupy demonstrators, using a call-and-repeat method of speaking, complained about Serota’s $2.5 million annual salary, and said that he “is an example of the 1 percent in the healthcare industry.” Common Dreams, 11-14-11

Former Bush political adviser Karl Rove seemed a bit flustered Tuesday night after his speech to Johns Hopkins University was interrupted by a group of about 15 protesters connected to “Occupy Baltimore” ... a woman shouted out, “Mic check?” A chorus of voices replied, “Mic check!” “Karl Rove! Is the architect!” they shouted. “The architect of Occupy Iraq! The architect of Occupy Afghanistan!”
Raw Story, 11-15-11

“I’ll be staying here tonight,” the former whistleblower [Daniel Ellsberg] told filmmaker John Hamilton. “I’ve never seen a group process like the general assembly tonight. They actually were voting here, thousands of people. It was an inspiring sight. I wouldn’t have thought it could happen.”
“This Occupy movement is an invention,” he continued. “Actually it came right from Egypt and from Tunisia. And actually, an inspiring thought to me is that the man who is accused of putting out the State Department cables to WikiLeaks, Bradley Manning, who is sitting in Leavenworth right now, one of his cables was a major inspiration the uprising in Tunisia. So, one person speaking out can make a major difference.”
Ellsberg added: “Frankly, it’s been a while since I felt as much hope as I feel tonight. … The young people are recreating the youth movement of the 60s. And the youth movement changed the country.” Dave Edwards, Daniel Ellsberg joins protest at UC Berkeley, Raw Story, 11-17-11

Here are embedded videos for each of these compelling tales of resistance. Please view them, and share them with others.

from John Hamilton on Vimeo.

Richard Power is the author of seven books, including Between Shadow and Night: The Singularity in Anticipation of Itself and True North on the Pathless Path: Towards a 21st Century Yoga. He writes and speaks on security, risk, human rights and sustainability, and has delivered executive briefings and led training in over 40 countries. He blogs athttp://words-of-power.blogspot.com and http://primalwordsofpower.blogspot.com
Posted by Richard Power at 3:33 AM