This Time the Whole World Can't Just Be Watching, It Must Be In the Streets, & At the Ballot Box 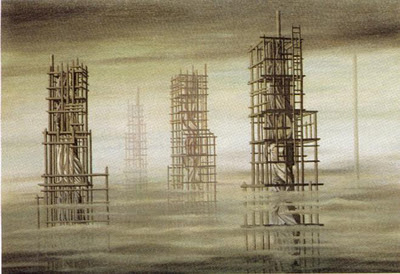 In May, I went to the site of the Tunisian protests; in July, I talked to Spain's indignados; from there, I went to meet the young Egyptian revolutionaries in Cairo's Tahrir Square; and, a few weeks ago, I talked with Occupy Wall Street protesters in New York. There is a common theme ... On one level, today's protesters are asking for little: a chance to use their skills, the right to decent work at decent pay, a fairer economy and society. Their hope is evolutionary, not revolutionary. But, on another level, they are asking for a great deal: a democracy where people, not dollars, matter, and a market economy that delivers on what it is supposed to do. The two are related ... Joseph Stiglitz, The Globalization of Protest, 11-7-11

This Time the Whole World Can't Just Be Watching, It Must Be In the Streets, & At the Ballot Box

Not Yet Ten Days That Shook the World, But ...

No, it wasn't ten days that shook the world, but it may well prove to have been ten days that caused a few serious cracks and fissures in the edifice of greed and misanthropy.

First, in the wake of an Oakland police riot, during which Iraq war veteran Scott Olsen suffered a fractured skull, the Occupy phenomenon seized the narrative for several days. The outrage led to a day of General Strike and a temporary port shutdown. It also resulted in an extraordinary march on Wall Street by Olsen's fellow Iraq and Afghanistan veterans.

In uniform and formation, scores of veterans joined Occupy Wall Street marchers Wednesday, proclaiming "We are veterans and we are the 99%." ... "My name is Joseph Carter. I am a two-time Iraq War vet, and this is the only occupation I believe in." Abby Zimet, Veterans Occupy: I Am Still Serving My Country, 11-3-11

Next, many thousands of engaged citizens surrounded the White House to deliver a powerful message to POTUS regarding what is perhaps the single most meaningful, unilateral action that he could take before November 2012.

Within 40 minutes a text had been sent out by the organizers saying, “We are completely circling the White House!” It ended up taking far less than 12,000 people to encircle the White House. One organizer said there were enough people that the lines around the White House were “four deep.” Bryan Farrell, Waging Nonviolence, 11-7-11

And finally, the electorate got a chance to return to the ballot box for the first time since November 2010, when it forfeited its responsibilities by staying home and allowing the Zombie Cult to gain even more power; this time, the electorate did not fail itself ...

The electorate successfully rolled back attacks on collective bargaining, and fighting for the jobs of teachers and fire fighters:

The electorate successfully rolled back attacks on women's reproductive rights:

A constitutional amendment that would have defined a fertilized egg as a person failed on the ballot in Mississippi on Tuesday, dealing the so-called “personhood” movement another blow. Washington Post, 11-9-11

But do not underestimate our predicament. Our circumstances are grave, nationally and globally. Economic and environmental pressures are threatening the world with implosion.

Buddy, Can You Spare A Krugerrand?

By making Wall Street its symbolic target, and branding itself as a movement of the 99%, OWS has redirected public attention to the issue of extreme inequality, which it has recast as, essentially, a moral problem. Only a short time ago, the “morals” issue in politics meant the propriety of sexual preferences, reproductive behavior, or the personal behavior of presidents. Economic policy, including tax cuts for the rich, subsidies and government protection for insurance and pharmaceutical companies, and financial deregulation, was shrouded in clouds of propaganda or simply considered too complex for ordinary Americans to grasp. Francis Fox Pivens, Tim Dispatch, 11-7-11

As I follow the Occupy phenomenon (and exhort it on), I keep remembering the tragedies of the 1992 uprising in South Central, and also how the nation's inner cities burned in the 1960s; and I keep wondering how long it will be before something truly earth-shaking occurs here? How will the most egregiously wronged and long-suffering among us respond to this quickening confrontation between the reactionary forces and the evolutionary forces? After all, the marches, demonstrations and occupations that have sprung up in the U.S.A. this year are, to date, significantly smaller than similar protests in countries with significantly smaller populations, such as Chile, Spain, Israel and Egypt.

So begins the news release for a recent study, “Current global warming appears anomalous in relation to the climate of the last 20,000 years.” That study finds clear evidence recent human-caused global warming is unprecedented in the past 20 millennia. Climate Progress, 11-8-11

"If we do not have an international agreement whose effect is put in place by 2017, then the door will be closed forever," IEA Chief Economist Fatih Birol warned today. Environmental News Service, 11-9-11

The failure to act on the Climate Crisis is the greatest failure of governance in human history.

The global output of heat-trapping carbon dioxide has jumped by a record amount, according to the US department of energy, a sign of how feeble the world's efforts are at slowing man-made global warming. The figures for 2010 mean that levels of greenhouse gases are higher than the worst case scenario outlined by climate experts just four years ago. Guardian, 11-3-11

This is a time to get engaged and stay in engaged. Don't surrender the streets. Don't abandon the ballot boxes. As Thom Hartmann says, we need an inside game and an outside game.

If you think that meaningful change will occur without radical action as exemplified by Occupy and the Tar Sands Action, than you don't know where you are or how you got here or what is going to happen next.

Conversely, if you think that meaningful change will occur while abandoning the ballot box in November 2010, as many of you did in 2010, than you don't know where you are or how you got here or what is going to happen next.

Appendix - Noam Chomsky Traces the Arc of the Moral Universe

Here is an excerpt from a long talk by Chomsky, followed by a Q and A with the Occupiers. It is a vital document, both for its analysis of where we are, and its insights into what to do and how to be. I urge you to follow the link to the full transcription and read it in its entirety.

The 1970s set off a kind of a vicious cycle that led to a concentration of wealth increasingly in the hands of the financial sector, which doesn’t benefit the economy. Concentration of wealth yields concentration of political power, which, in turn, arrives to legislation that increases and accelerates the cycle. The physical policies such as tax changes, rules of corporate governance, deregulation were essentially bipartisan. Alongside of this began a very sharp rise in the costs of elections, which drives the political parties even deeper than before into the pockets of the corporate sector.
A couple years later started a different process. The parties dissolved, essentially. It used to be if you were a person in Congress and hoped for a position of committee chair or a position of responsibility, you got it mainly through seniority and service. Within a couple of years, you started to have to put money into the party coffers in order to get ahead. That just drove the whole system even deeper into the pockets of the corporate sector and increasingly the financial sector--a tremendous concentration of wealth, mainly in the literally top 1/10th of 1 percent of the population.
Meanwhile, for the general population it began an open period of pretty much stagnation, or decline for the majority. People got by through pretty artificial means -- like borrowing, so a lot of debt. Longer working hours for many. There was a period of stagnation and a higher concentration of wealth. The political system began to dissolve. There’s always been a gap between public policy and the public will, but it just grew kind of astronomically ... Noam Chomsky Speaks to Occupy, 11-1-11
Covering Occupy Wall Street, Current TV's Countdown with Keith Olbermann Interviews Joshua Shepherd Links Vets’ Issues With Larger Movement and Reads a Text from Scott Olsen

Richard Power is the author of seven books, including Between Shadow and Night: The Singularity in Anticipation of Itself and True North on the Pathless Path: Towards a 21st Century Yoga. He writes and speaks on security, risk, human rights and sustainability, and has delivered executive briefings and led training in over 40 countries. He blogs athttp://words-of-power.blogspot.com and http://primalwordsofpower.blogspot.com
Posted by Richard Power at 4:45 AM