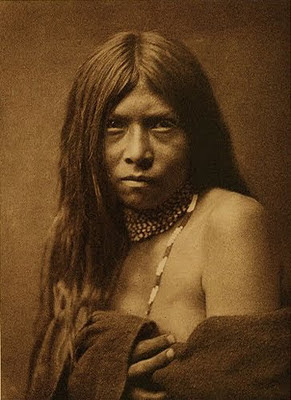 Edward Curtis, Apache Girl (1906)
Ayn Rand’s “philosophy” is nearly perfect in its immorality, which makes the size of her audience all the more ominous and symptomatic as we enter a curious new phase in our society....To justify and extol human greed and egotism is to my mind not only immoral, but evil.— Gore Vidal, 1961 Bruce E. Levine, How Ayn Rand Seduced Generations of Young Men and Helped Make the U.S. Into a Selfish, Greedy Nation, Reuters AlterNet, 12-15-11

A week has now passed since the greatest failure of governance in human history reached its culmination at the Durbin climate summit. And no, I am not indulging in hyperbole.

The UN climate talks in Durban were a failure and take the world a significant step back by further undermining an already flawed, inadequate multilateral system that is supposed to address the climate crisis ... Friends of the Earth, Disastrous "Durban Package" Accelerates Onset of Climate Catastrophe, 12-31-11

"Delaying real action till 2020 is a crime of global proportions. "This means the world is on track to a 4C temperature rise, a death sentence for Africa ... The richest 1% of the world have decided that it is acceptable to sacrifice the 99%."John Vidal and Fiona Harvey, Durban Climate Deal Struck after Tense All-Night Session, Guardian, 12-12-11

They bailed out the banks in days. But even deciding to bail out the planet is taking decades. George Monbiot, Why is it so easy to save the banks – but so hard to save the biosphere? Independent, 12- 16-11

Yes, a week has now passed since the greatest failure of governance in human history reached its culmination at the Durbin climate summit, and there has been almost no debate about it in the US body politic or even mention of it on US air waves. (Instead, chillingly, the national discussion this week has been an utterly delusional one about whether "we achieved our goals" in Iraq, and whether or not "it is the right time" to leave.)

Meanwhile, Occupy Wall Street has brilliantly framed our current predicament as the co-opting of US economic and political power by 1% at the expense of the 99%. Of course, if the contrast were not so stark between the current circumstances and trajectories of the 99% versus the 1%, the framing would not seem so brilliant.

The banks and the rating agencies have become the dictators of the West. Like the Mubaraks and Ben Alis, the banks believed – and still believe – they are owners of their countries. The elections which give them power have – through the gutlessness and collusion of governments – become as false as the polls to which the Arabs were forced to troop decade after decade to anoint their own national property owners. Robert Fisk, Bankers are the Dictators of the West, Independent, 12-11-11

Yes, we are at a moment in history when the reality of our economic and environmental challenges have become inescapable. And yet, there is nothing much more than escapism being proffered from either our political establishment or mainstream news media; both are unabashedly propping up false memes of a 1% world-view.

Have we ever been so badly served by the press? We face multiple crises – economic, environmental, democratic – but most newspapers represent them neither clearly nor fairly. The industry that should reveal and expose instead tries to contain and baffle, to foil questions and shut down dissent. The men who own the corporate press are fighting a class war, seeking, even now, to defend the 1% to which they belong against its challengers. But because they control much of the conversation, we seldom see it in these terms. Our press re-frames major issues so effectively, it often recruits its readers to mobilise against their own interests. George Monbiot, Britain's press are fighting a class war, defending the elite they belong to, Guardian, 12-12-11

Scientific research is revealing that 21st century financial institutions with a high rate of turnover and expanding global power have become highly attractive to psychopathic individuals to enrich themselves at the expense of others, and the companies they work for. A peer-reviewed theoretical paper titled “The Corporate Psychopaths Theory of the Global Financial Crisis” details how highly placed psychopaths in the banking sector may have nearly brought down the world economy through their own inherent inability to care about the consequences of their actions ... Scientists believe about 1% of the general population is psychopathic ... There is emerging evidence that this frequency increases within the upper management of modern corporations." Mitchell Anderson, Weeding Out Corporate Psychopaths, Toronto Star, 11-24-11

As I have said since I started writing and speaking about these issues over a decade ago, our environmental and economic crises are inextricably bound up, and so are the solutions. Either our future is green, and altruistic, and grounded in declarations of human rights and Gaia's rights, or it will be a horrific one. The choice really is ours.

Remember, there are many mysteries about the pyramids, but the source of their strength is not one of them, the strength of all pyramids flows from the base, the broad bottom, and not from the pinnacle. That is a geometric truth.


Richard Power is the author of seven books, including Between Shadow and Night: The Singularity in Anticipation of Itself and True North on the Pathless Path: Towards a 21st Century Yoga. He writes and speaks on security, risk, human rights and sustainability, and has delivered executive briefings and led training in over 40 countries. He blogs at http://words-of-power.blogspot.com and http://primalwordsofpower.blogspot.com
Posted by Richard Power at 11:58 AM