Sandro Botticelli - Primavera, a.k.a. the Allegory of Spring (1482) 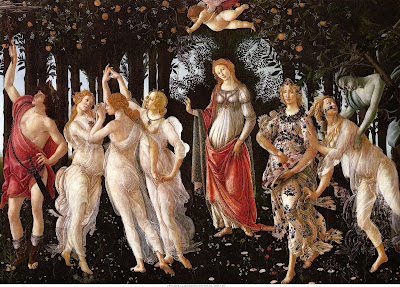 Sandro Botticelli painted his magnificent Primavera (a.k.a. the Allegory of Spring) in 1482.

Have you ever studied this masterpiece?

Venus, goddess of love, is strolling through an orange grove, with her entourage. On one side of Venus, the Three Graces (i.e., beauty, charm and creativity) dance in a circle; on Venus' other flank, Flora, the goddess of flowers and Spring walks just a step or two ahead of her. (According to art historians Botticelli put five hundred plant species and one hundred ninety different flowers into this painting.)

Just beyond the Three Graces stands Mercury, the messenger god, gazing into the boughs of an orange tree, and wearing a sword on his belt, with which to protect Venus and her entourage.

Just beyond Flora, the nymph Chloris looks backs at Zephyrus, the god of the wind, who passionately pursues her from above.

Venus' blindfolded son, Amor (a.k.a "Cupid") floats above them all, shooting his flame-tipped arrows.

There is more, but you can discover it for yourself ...

I only offer contemplation of Botticelli's Primavera as a powerful counterpoint to the grisly news I need to deliver to you. It is grisly news you won't hear on the mainstream news tonight or tomorrow night or the night after ...

No, I am not going to expend this 1,300 or so words on the Zombie Cult formerly known as the Republican Party (there will be plenty of time for that before November), nor will I expend it whistling into the wind on Iran (there are others who whistle the right tune on that issue, notably eight former U.S. military, intelligence and State Department officials, and oh yes, Juan Cole) ... No, I am going to expend my 1,300 or so words on the three civilization-threatening issues that the political establishment and the mainstream news media refuse to confront ...

A year after the Fukushima triple reactor meltdown, and the political establishment and the mainstream news media are still in denial about the risks of nuclear energy.

The radioactivity that has fallen in Japan for many months from Fukushima will have enormous consequences to the people of Japan. The type of accident that occurred at Fukushima Daiichi was “something that never happened a multiple reactor catastrophe…happening within 200 kilometers of 30 million people,” notes Dr. Alexey Yablokov ... “The Fukushima disaster will be worse than Chernobyl,” agrees Dr. Janette Sherman ... Karl Grossman, The Big Lie: One Year After Fukushima, Nuclear Cover Up Revealed, 5-5-12

The Nuclear Regulatory Commission (NRC) is jeopardizing reform by failing to heed its post-Fukushima task force’s top recommendation to clarify its “patchwork” of regulations for “beyond-design-basis” events that reactors are not intended to withstand, according to a report released today by the Union of Concerned Scientists (UCS) ... Union of Concerned Scientists, NRC Needs a More Comprehensive Approach to Post-Fukushima Nuclear Safety, Report Finds, 3-6-12

Two years after the BP ecocide in the Gulf of Mexico, and the political establishment and the mainstream news media are still in denial about the risks of deep sea drilling.

After a yearlong drilling moratorium, BP and other oil companies are intensifying their exploration and production in the gulf, which will soon surpass the levels attained before the accident. Drilling in the area is about to be expanded in Mexican and Cuban waters, beyond most American controls, even though any accident would almost inevitably affect the United States shoreline. Oil companies are also moving into new areas off the coast of East Africa and the eastern Mediterranean. Stephen Lacey, Two Years After BP Disaster, Deepwater Drilling Regains Momentum, Climate Progress, 5-5-12

At least a full DECADE since scientific consensus on the consequences of human-induced climate change was reached, and yet the political establishment and the mainstream news media are still in denial.

High levels of pollution may be turning the planet’s oceans acidic at a faster rate than at any time in the past 300 million years, with unknown consequences for future sea life, researchers said Thursday. The acidification may be worse than during four major mass extinctions in history when natural pulses of carbon from asteroid impacts and volcanic eruptions caused global temperatures to soar, said the study in the journal Science. Ocean acidification may be worst in 300 million years: study, Agence France Press, 3-1-12

A new NASA study revealed that the oldest and thickest Arctic sea ice is disappearing at a faster rate than the younger and thinner ice at the edges of the Arctic Ocean’s floating ice cap. The thicker ice, known as multi-year ice, survives through the cyclical summer melt season, when young ice that has formed over winter just as quickly melts again. The rapid disappearance of older ice makes Arctic sea ice even more vulnerable to further decline in the summer ... Joe Romm, The Arctic Death Spiral Continues: Thick, Multi-Year Sea Ice Melting Faster, NASA Study Finds, Climate Program, 3-1-12

Obama’s all-of-the-above energy speech took a none-of-the-above approach to environmental problems: It ignored them all, including the most important of them all, global warming. Obama is currently in the midst of a failed presidency from a historical perspective because of his abandonment of the climate issue, which is the only issue future generations are going to care about if we don’t act now, as I’ve said many times. Joe Romm, ‘All of the Above’: Obama Names His Failed Presidency, Climate Progress, 2-27-12

But what are we to do?

Well, no matter what any of us imagine ourselves to be doing, all we can really do is what Mahatma Gandhi's suggested, i.e., "We must become the change we want to see in the world."

Yes, a great transformation is needed; the MASSIVE, NON-VIOLENT EVOLUTION I have have been calling for.

One vector into this great transformation might be to spend some time with the image of Botticelli's Primavera; within your own psyche, enter into the painting, and explore the energies depicted within it; perhaps even indulge in some home-brew mantra yoga, i.e., whisper, SING, silently intone, SHOUT "Primavera, Primavera, Primavera ..."

Maybe the Gods will re-awaken from their ages-long slumber, and rise again -- from within us.

Richard Power is the author of seven books, including Between Shadow and Night: The Singularity in Anticipation of Itself and True North on the Pathless Path: Towards a 21st Century Yoga. He writes and speaks on security, risk, human rights and sustainability, and has delivered executive briefings and led training in over 40 countries. He blogs at http://words-of-power.blogspot.com and http://primalwordsofpower.blogspot.com
Posted by Richard Power at 7:41 PM