The Language of Primal Reality

Giant Deer (Megaloceros). One of over two thousand cave paintings at Lascaux. Paleolithic era (17,300 years ago). 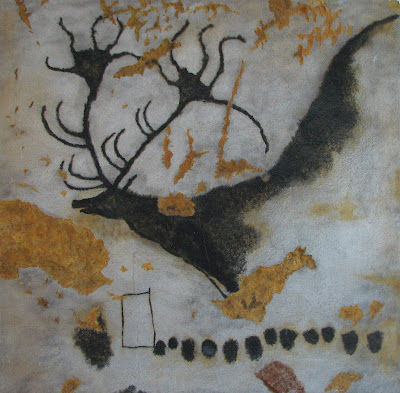 The Language of Primal Reality

English is an extraordinary, but mysterious language.

It doesn't illuminate the psyche, like Sanskrit. It doesn't increase your bandwidth or expand your disk space, like German. It doesn't have the defiant beauty of French, or the aphrodisiac power of Spanish. It isn't, like Farsi, the very womb in which Poetry itself gestated. It doesn't possess the miraculous medicine of the countless languages lost in the great forests of this world.

And yet, if you are borne with the gift of how to whisper to this wild horse language, it will let you mount it, and then it will gallop away, bearing you off to high, wild places that a nameless legion have perished searching for in vain.

The English language is a paradox; at once, so rich and yet so bankrupt.

Consider three words, in particular: "Love," "God" and "Prayer." Three words, at once, so holy, and yet so hackneyed.

"Love"? Is there any word that has been so degraded, and yet still has such momentum?

At its worst, it is nothing more than a cheap, gaudy disguise for a spectrum of foolishness ranging from infatuation to projection to addiction; at its best its utterance encapsulates the tidal pull of all the planet's oceans in one syllable.

"Prayer"? At its worst, it is a spoiled brat cajoling an imaginary daddy; at its best, it is someone brave enough to stand in perfect alignment, at the edge of everything, asking for nothing.

Posted by Richard Power at 9:37 PM