George Clooney, Cornel West, Noam Chomsky and the Rainbow Race at the Gates of Eden

Frida Kahlo and Diego Rivera at a demonstration of
Syndicate of Technical Workers, Painters, and Sculptors, May 1, 1929 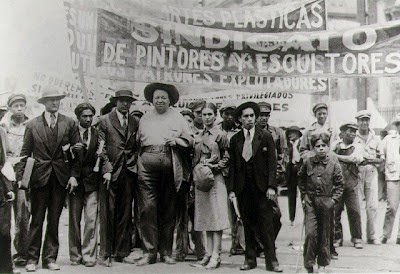 One blue sky above us / One ocean lapping all our shore / One earth so green and round / Who could ask for more / And because I love you / I'll give it one more try / To show my rainbow race / It's too soon to die ... Pete Seeger, Rainbow Race (1971)

George Clooney, Cornel West, Noam Chomsky and the Rainbow Race at the Gates of Eden

Two songs have been rattling around inside my head in these last few nights. Yes, two songs are dueling for dominance in the stream of my consciousness; one is a song of rekindled hope, "My Rainbow Race," and the other is a song of defiant clarity, "Gates of Eden

Tens of thousands of Norwegians marched beneath pouring rain in Oslo today, converging at Central Square to sing together a Norwegian version of American folk music singer Pete Seeger's "Rainbow Race" in a moving protest against mass killer Anders Behring Breivik, who murdered 77 Norwegians last year in the name of eliminating "multiculturalism" and leftist ideologies. Common Dreams, 40,000 Norwegians Sing Out in Defiance and Love, 4-26-12

(See the video embedded at the end of this post to savor the profound poignancy of the moment.)

Consider May Day 2012 in the USA. It is, after all, a time of great economic injustice and deepening disparity between the 1% and the 99%. Yet people are not streaming into the streets in the hundreds of thousands (or even tens of thousands).

Consider Earth Day 2012 in the USA. While the much of the Fortune 500 spent the day greenwashing themselves, POTUS edited all mention of climate change from his official proclamation.

"All in all can only fall," Dylan sang in Gates of Eden, "with a crashing but meaningless blow." Of course, it could be worse.

"The Stench of Hypocrisy and Expediency ..."

Consider the plight of Darfur, South Kordofan and Blue Nile.

George Clooney and others have been warning about this turn of events for quite some time; and Words of Power has documented these warnings. And yet ...

On Sunday dozens of people from Darfur held vigils in front of the US and UK embassies and headquarters of the Arab League to draw attention to the situation in Darfur, South Kordofan and Blue Nile. The protestors call for an end to war, rape and aerial bombardments and to hand over president Bashir to the International Criminal Court. Radio Dabanga, 4-29-12

Indeed, as I have noted repeatedly, other than the Climate Crisis itself, none of the numerous disappointments of POTUS' first term is more incomprehensible than his policy on Darfur and Sudan.

The stench of hypocrisy and expediency is in the air wherever one turns in assessing international responses to recent events in Sudan ... And in their attempts to achieve a factitious “even-handedness,” various actors—including the UN, the U.S., the AU, and the EU—have encouraged Khartoum to believe that it has somehow gained the diplomatic, even moral upper hand ...” Eric Reeves, Scandalous International Hypocrisy on Sudan, 4-23-12

Over the years, senior military and intelligence officials have caught up with what some of us were declaring a decade ago, i.e., that the Climate Crisis is a national security issue of the highest order. Similarly, Olivier De Schutter, UN Special Rapporteur on the Right to Food is now calling the Climate Crisis a profound human rights issue.

The kingdoms of Experience / In the precious wind they rot / While paupers change possessions / Each one wishing for what the other has got / And the princess and the prince / Discuss what’s real and what is not / It doesn’t matter inside the Gates of Eden ...

We are in the throes of the greatest failure of governance in human history. Nowhere is this failure more egregious than in the USA, where our realistic political options are limited to choosing between the Death Eater corporatists who deny the reality of the human-induced Climate Crisis and corporatist-lite neo-liberals who do not deny the reality of it but are unwilling to prepare the populace for the consequences of what we are doing to ourselves. Going green, you need to know, means more than just transitioning away from an energy model that is bound to the burning of fossil fuels.

World population needs to be stabilised quickly and high consumption in rich countries rapidly reduced to avoid "a downward spiral of economic and environmental ills", warns a major report from the Royal Society. Contraception must be offered to all women who want it and consumption cut to reduce inequality, says the study published on Thursday, which was chaired by Nobel prize-winning biologist Sir John Sulston. The assessment of humanity's prospects in the next 100 years, which has taken 21 months to complete, argues strongly that to achieve long and healthy lives for all 9 billion people expected to be living in 2050, the twin issues of population and consumption must be pushed to the top of political and economic agendas. Both issues have been largely ignored by politicians and played down by environment and development groups for 20 years, the report says. John Vidal, World needs to stabilise population and cut consumption, says Royal Society, Guardian, 4-25-12

"The Ultimate Question is ..."

"The ultimate question is can we move from conversation to action?" That's how Tavis Smiley articulated the challenge in a recent Democracy Now! interview.

In The Rich and the Rest of Us, A Poverty Manifesto, Smiley and co-author Dr. Cornel West deliver a scathingly insightful analysis and follow it up with a bold 12-point program to, as Smiley states,"reduce and eradicate poverty in this country."

CORNEL WEST: Poverty is the new slavery. Oligarchs are the new kings. They’re the new heads of this structure of domination. And we’ve got to coalesce in our critique of oligarchs and oligarchy and plutocracy, without hating oligarchs and plutocrats.
JUAN GONZALEZ: So what happened to the "audacity of hope"?
CORNEL WEST: Of Barack Obama?
JUAN GONZALEZ: Yes. And—
CORNEL WEST: Well, it’s a wonderful language. He got it from Jeremiah Wright, our dear brother Jeremiah Wright. Jeremiah Wright comes out of a black prophetic tradition that talks about hope, not cheap American optimism. So he borrows the language of Martin King, he borrows the language of Jeremiah Wright and a whole host of others, Fannie Lou Hamer and others—blood, sweat and tears, critiques of oligarchy and critiques of patriarchy and critiques of anti-Semitism, anti-Arab, anti-terror, anti-Latino racism and so forth. So we get these mainstream politicians, these neoliberals, who preserve oligarchic rule, use the language of progressives, and think that somehow they will not be disclosed for what they are: neoliberals still tied to the status quo. Tavis Smiley and Cornel West: The Rich and the Rest of Us -- a Poverty Manifesto

One blue sky above us / One ocean lapping all our shore / One earth so green and round / Who could ask for more / And because I love you / I'll give it one more try / To show my rainbow race / It's too soon to die ...

As these two songs have been vying for hegemony in my stream of consciousness over these last few nights, I have been thinking about George Clooney and Noam Chomsky.

What's A "Sensible Revolutionary" To Do?

Consider the May Day ruminations of Noam Chomsky.

A sensible revolutionary will try to push reform to the limits, for two good reasons. First, because the reforms can be valuable in themselves. People should have an eight-hour day rather than a twelve-hour day. And in general, we should want to act in accord with decent ethical values. Secondly, on strategic grounds, you have to show that there are limits to reform. Perhaps sometimes the system will accommodate to needed reforms. If so, well and good. But if it won't, then new questions arise ... If you get to a point where the existing institutions will not bend to the popular will, you have to eliminate the institutions. Noam Chomsky, May Day, 4-29-12

Yes, Professor Chomsky, but what does the "sensible revolutionary" do when the push for reform has smashed into a brick wall, and there is no mass of humanity in the streets to tear down that brick wall?

All and all can only fall with a crashing, but meaningless blow / No sound ever comes from the Gates of Eden ...

Thousands Sing Parts of My Rainbow Race By Pete Seeger in Oslo, Norway

Richard Power is the author of seven books, including Between Shadow and Night: The Singularity in Anticipation of Itself and True North on the Pathless Path: Towards a 21st Century Yoga. He writes and speaks on security, risk, human rights and sustainability, and has delivered executive briefings and led training in over 40 countries. He blogs at http://words-of-power.blogspot.com and http://primalwordsofpower.blogspot.com
Posted by Richard Power at 1:42 AM