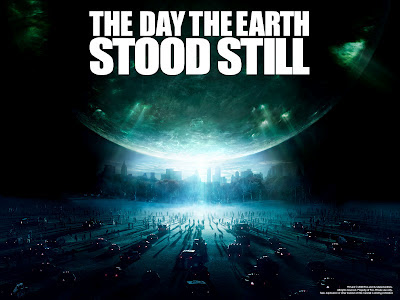 “We need a system of governance that takes a more long-term view”, said Professor Randers, speaking in Rotterdam. “It is unlikely that governments will pass necessary regulation to force the markets to allocate more money into climate friendly solutions, and must not assume that markets will work for the benefit of humankind ... Humanity has overshot the earth’s resources, and in some cases we will see local collapse before 2052 – we are emitting twice as much greenhouse gas every year as can be absorbed by the world’s forests and oceans.” Club of Rome, New Report issues warning about humanity’s ability to survive without major change ..., 5-7-12

In 1969, Buckminster Fuller articulated the choice looming before us, Utopia or Oblivion? Twelve years later, he was still urging us on.

Think of it. We are blessed with technology that would be indescribable to our forefathers. We have the wherewithal, the know-it-all to feed everybody, clothe everybody, and give every human on Earth a chance. We know now what we could never have known before -- that we now have the option for all humanity to make it successfully on this planet in this lifetime. Whether it is to be Utopia or Oblivion will be a touch-and-go relay race right up to the final moment. R. Buckminster Fuller, Critical Path

Back then, all things still seemed possible.

In 2012, our choices are much starker and narrower.

We’re really regressing back to the dark ages. It’s not a joke. And if that’s happening in the most powerful, richest country in history, then this catastrophe isn’t going to be averted -- and in a generation or two, everything else we’re talking about won’t matter. Something has to be done about it very soon in a dedicated, sustained way. Noam Chomsky, A Rebellious World or a New Dark Age? TomDispatch.com, 5-8-12

There is still time (although it is rapidly slipping away). Unless we are visited by Klaatu and the Earth does indeed stand still, wresting Ecotopia from Dystopia will require MASSIVE, NON-VIOLENT EVOLUTION. Honestly, I suggest that while you hope and work for the best, you also prepare for the worst.

"A Certain Route to Failure"

The so-called doctrine of "Austerity" is a cruel farce perpetrated by the 1%, and enabled by its minions in the mainstream media and its worshippers in the body politic.

After all, it was in 1979 that then President Jimmy Carter offered a true message of Austerity.

We are at a turning point in our history. There are two paths to choose. One is a path I've warned about tonight, the path that leads to fragmentation and self-interest. Down that road lies a mistaken idea of freedom, the right to grasp for ourselves some advantage over others. That path would be one of constant conflict between narrow interests ending in chaos and immobility. It is a certain route to failure. All the traditions of our past, all the lessons of our heritage, all the promises of our future point to another path, the path of common purpose and the restoration of American values. That path leads to true freedom for our nation and ourselves. We can take the first steps down that path as we begin to solve our energy problem. Energy will be the immediate test of our ability to unite this nation, and it can also be the standard around which we rally. On the battlefield of energy we can win for our nation a new confidence, and we can seize control again of our common destiny ... The energy crisis is real. It is worldwide. It is a clear and present danger to our nation. These are facts and we simply must face them ... President Jimmy Carter, Crisis in Confidence, Televised Address to the Nation, 7-15-12

But tragically, in 1980, America dispensed with Jimmy Carter, denying him a second term, and consigning him to the limbo of humanitarianism, where he could not threaten the Grand Illusion any further. Instead, swaddled snugly in its delusional exceptionalism, America elected itself a jelly bean god to tell it fairy tales about a past that never was and a future that never could be. Sanity was put in storage along with the solar panels that Carter had installed on the White House roof.

Watch Carter's prophetic warning again, knowing what you know now! It is available on You Tube (at least for now), and I have embedded it at the end of this post. Of course, it will never be mentioned as context for our current circumstances, on Meat the Press or This Weak or Fork the Nation. Wolf Bluster won't bring it up, nor will George StopandLaughatUs. (Indeed, the only voice in either the mainstream or alternate media that won't let you forget Carter's speech is Thom Hartmann.)

And, needless to say, you won't read any reference to it from the NYTwits, at least not on their front page or in their "Business" section.

Bleeding patients, or nations, to cure them is quackery that harms the patient and the nation. Economists pushing the Berlin Consensus violate the first principle of the Hippocratic Oath – do no harm. Paul Krugman needs to run a teach-in at the New York Times for its international business reporters. They are helping the economic quacks who prescribe the snake oil of austerity and have as their real objectives (1) gutting Social Security, (2) destroying unions, (3) slashing working class wages, and (4) making the one percent ever richer and more politically dominant. William Black, Why Paul Krugman Needs to Run a Teach-in for Ignorant New York Times Business Reporters, AlterNet.org,

"Austerity"? Willful ignorance. Or perhaps more accurately, deceit grounded in a fundamental self-deceit about the nature of self-interest. Ah, but that brings us back to ignorance, doesn't it? The Buddha's conclusions are inescapable; it is human ignorance that is at the root of human suffering.

Yes, we have arrived at our one last chance to choose if not Utopia over Oblivion, at least Ecotopia over Dystopia.

Consider this remarkable final testament from Ernest Callenbach, the author of Ecotopia (1975), discovered on his computer after his recent death ...

To all brothers and sisters who hold the dream in their hearts of a future world in which humans and all other beings live in harmony and mutual support — a world of sustainability, stability, and confidence. A world something like the one I described, so long ago, in Ecotopia and Ecotopia Emerging. As I survey my life, which is coming near its end, I want to set down a few thoughts that might be useful to those coming after ... Since I wrote Ecotopia, I have become less confident of humans’ political ability to act on commonsense, shared values. Our era has become one of spectacular polarization, with folly multiplying on every hand. That is the way empires crumble: they are taken over by looter elites, who sooner or later cause collapse. But then new games become possible, and with luck Ecotopia might be among them. Humans tend to try to manage things: land, structures, even rivers. We spend enormous amounts of time, energy, and treasure in imposing our will on nature, on preexisting or inherited structures, dreaming of permanent solutions, monuments to our ambitions and dreams. But in periods of slack, decline, or collapse, our abilities no longer suffice for all this management. We have to let things go. All things “go” somewhere: they evolve, with or without us, into new forms. So as the decades pass, we should try not always to futilely fight these transformations. As the Japanese know, there is much unnoticed beauty in wabi-sabi — the old, the worn, the tumble-down, those things beginning their transformation into something else. We can embrace this process of devolution: embellish it when strength avails, learn to love it. Must-Read: The Powerful Final Words Of Ecotopia Author Ernest Callenbach, Climate Progress, 5-7-12

If the USA had listened to R. Buckminister Fuller, or Ernest Callenbach, or President Jimmy Carter, or any of the other voices crying in the wilderness, we would find ourselves in a very different world today.

But those prophetic voices were ignored.

America, whose voices are you ignoring now?

Jimmy Carter on the Crisis of Confidence (Televised Address to the Nation, 1979)

Richard Power is the author of seven books, including Between Shadow and Night: The Singularity in Anticipation of Itself and True North on the Pathless Path: Towards a 21st Century Yoga. He writes and speaks on security, risk, human rights and sustainability, and has delivered executive briefings and led training in over 40 countries. He blogs at http://words-of-power.blogspot.com and http://primalwordsofpower.blogspot.com
Posted by Richard Power at 6:50 PM