"And A Little Child Shall Lead Them ..." But What If They Don't Follow? Reflections on the Sham and Shame of Rio+20 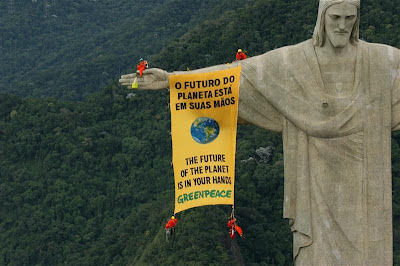 Global sea levels could rise two to three times higher over the next century than previously estimated, according to a study released Friday by the US National Research Council ... By 2100, the NRC estimates that global sea levels will rise between 20-55 inches (50 and 140 centimeters). Study: Sea-level rise two or three times higher than expected, Agence France Press, 6-22-12

From Cape Hatteras, N.C., to just north of Boston, sea levels are rising much faster than they are around the globe, putting one of the world's most costly coasts in danger of flooding, government researchers report. U.S. Geological Survey scientists call the 600-mile swath a "hot spot" for climbing sea levels caused by global warming ... It's not just a faster rate, but at a faster pace, like a car on a highway "jamming on the accelerator," said the study's lead author, Asbury Sallenger Jr., an oceanographer at the agency. Seth Borenstein, Sea Rise Faster on East Coast Than Rest of Globe, AP, 6-24-12

"And A Little Child Shall Lead Them ..." But What If They Don't Follow? Reflections on the Sham and Shame of Rio+20

Nevertheless, these two disturbing stories about the sea level rising faster and higher than projected strike me as a perfect frame for contemplating the aftermath of Rio+20, Copenhagen and the rest of the follies since Rio and Kyoto. Because it is all coming now, faster and with greater intensity than projected; and as I wrote last year in Burning Man 2011: Primal Culture and Core Civilization as a Moveable Feast, "we are on our own."

Consider the outcomes of Rio+20.

"Think of me as half the world. i stand here with fire in my heart."

The promise uttered by the prophet Isaiah has been with us for two millennium, "The wolf also shall dwell with the lamb, and the leopard shall lie down with the kid; and the calf and the young lion and the fatling together; and a little child shall lead them." (Isaiah, Chapter 11). But what if humanity's "leaders" did not follow the children's lead? Well, we will see sooner and later.

Remember the "the girl who silenced the world for six minutes"? In 1992, then 12 years old, Severn Cullis-Suzuki spoke poignantly of the danger that we have come to poise to our world and ourselves. In 2012, she returned provide context for Rio+20.

We have economic meltdown around the world. We have social unrest. We have revolution just boiling up all over the planet. And now we have our national leaders that are hunkering down more and more, defending their national interests, and less and less looking for the good of humanity. I believe we have a crisis in governance. This is showing that the world’s leaders are not able to come together and lead for the sake of humanity. What does it mean when the world’s elected leaders do not represent the good of the people that they’re supposed to care for? At Rio+20, Severn Cullis-Suzuki Revisits Historic '92 Speech, Fights for Next Generation's Survival, Democracy Now, 6-21-12 (Video embedded below)

And now another youth has spoken before the conscience-challenged "leaders" gathered in Rio to give lip service to the future while they and their true constituents (i.e., the corporatists and their minions) enjoy the fruits of the present.

My name is Brittany Trilford. I’m 17 years old. I’m a child. Today, in this moment, I’m all children, your children, the world’s three billion children. Think of me as half the world. I stand here with fire in my heart. I’m confused and angry at the state of the world, and I want us to work together now to change this. We are here today to solve the problems that we have caused as a collective, to ensure that we have a future ... You have 72 hours to decide the fate of your children, my children, my children’s children. And I start the clock now. Tick, tick, tick. "Are You Here to Save Face — or Save Us?": Brittany Trilford, 17, Addresses World Leaders at Rio+20 (Video embedded below)

And the draft? "283 paragraphs of fluff" suggesting "190 governments [have] given up on the world and given up on us"

At this point, you are are probably not surprised at the Rio+20 "outcomes."

The declaration is remarkable for its absence of figures, dates and targets. It is as stuffed with meaningless platitudes as an advertisement for payday loans, but without the necessary menace. There is nothing to work with here, no programme, no sense of urgency or call for concrete action beyond the inadequate measures already agreed in previous flaccid declarations. Its tone and contents would be better suited to a retirement homily than a response to a complex of escalating global crises. The draft and probably final declaration is 283 paragraphs of fluff. It suggests that the 190 governments due to approve it have, in effect, given up on multilateralism, given up on the world and given up on us. George Monbiot, Rio+20 draft text is 283 paragraphs of fluff, Guardian, 6-22-12

Of course, despite the weakness of its official "leaders," much of humanity is following those children, and in the hearts of those who have heard the call, the lion is indeed at peace with the lamb.

Consider also this official statement from Friends of the Earth.

World leaders failed at their Summit in Rio, mainly because of the undue influence that multinational corporations have on them and the UN. But the parallel People’s Summit demonstrated that real solutions to the current crises do exist and that people are successfully mobilizing around them. By exposing the negative influence of multinational corporations we have gained considerable momentum in our efforts to reclaim the UN as a people’s space. And this campaign is just starting. Nnimmo Bassey, Friends of the Earth, Comment on the Rio+20 Summit Closing Day, 6-22-12

"Are You Here to Save Face — or Save Us?": Brittany Trilford, 17, Addresses World Leaders at Rio+20

Richard Power is the author of seven books, including Between Shadow and Night: The Singularity in Anticipation of Itself and True North on the Pathless Path: Towards a 21st Century Yoga. He writes and speaks on security, risk, human rights and sustainability, and has delivered executive briefings and led training in over 40 countries. He blogs at http://words-of-power.blogspot.com and http://primalwordsofpower.blogspot.com
Posted by Richard Power at 7:24 PM