A Line has Been Drawn in the Tar Sands, POTUS, which Side will You Stand On? No Middle Ground Down that Line; No Wiggle Room for Compromise. Either You Stand with the Heroes, or With Those Responsible for Planetary Catastrophe 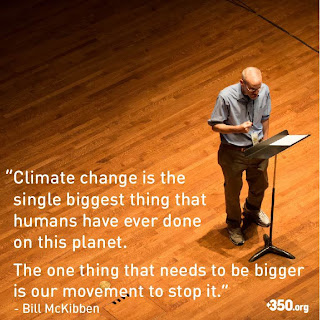 Climate scientists have linked the massive snowstorms and bitter spring weather now being experienced across Britain and large parts of Europe and North America to the dramatic loss of Arctic sea ice. John Vidal, Guardian, 3-25-13

How many extreme storm surges like that from Hurricane Katrina, which hit the U.S. coast in 2005, will there be as a result of global warming? New research from the Niels Bohr Institute show that there will be a tenfold increase in frequency if the climate becomes two degrees Celcius warmer. Science Daily, 3-18-13

With data from 73 ice and sediment core monitoring sites around the world, scientists have reconstructed Earth's temperature history back to the end of the last Ice Age. The analysis reveals that the planet today is warmer than it's been during 70 to 80 percent of the last 11,300 years ... Space Daily, 3-8-13

A Line has Been Drawn in the Tar Sands, POTUS, which Side will You Stand On? No Middle Ground Down that Line; No Wiggle Room for Compromise. Either You Stand with the Heroes, or With Those Responsible for Planetary Catastrophe

Those who fund climate change denial are guilty of underwriting a global holocaust. Those in the media who live off that funding by fomenting climate science denial are as guilty as the radio broadcasters convicted for advancing the 1994 genocide in Rwanda. And those elected officials who wrap their naked greed in such denial? Well, they are an abomination unto the Goddess.

[Admiral Samuel J. Locklear, commander of the Pacific Command] met privately with scholars at Harvard and Tufts universities on Friday and said that the biggest long-term security threat in the Pacific region is climate change, reports the Boston Globe, and that significant upheaval related to the warming planet is: "Probably the most likely thing that is going to happen... that will cripple the security environment, probably more likely than the other scenarios we all often talk about." Locklear continued: "People are surprised sometimes, [but] you have the real potential here in the not-too-distant future of nations displaced by rising sea level. Certainly weather patterns are more severe than they have been in the past. We are on super typhoon 27 or 28 this year in the Western Pacific. The average is about 17." What's really interesting here is that the US has declared the Asia Pacific region (and all its security issues from North Korea, China, Japan, and the South China Sea) its primary security focus." Julia Whitty, Mother Jones, 3-12-13

Even in the early stages of this self-inflicted Climate Crisis, the impact has proven devastating. Here is just one example.

In October 2010, just months before a Tunisian street vendor self-immolated and sparked what would become the Arab Spring, a prolonged drought was turning Syria's verdant farmland into dust. By last month, more than 70,000 Syrians, mostly civilians, had been killed in the brutal and ongoing conflict between President Bashar al-Assad's dictatorial regime and a coalition of opposition forces; just today, the UN announced that over one million refugees fled the country in the last two years. International security experts are now looking at the connection between recent droughts in the Middle East and the protests, revolutions, and deaths that followed, and building a body of evidence to suggest that climate change played a key role in Syria's violence and the Arab Spring generally.
Tim McDonnell, Mother Jones, 3-6-13

The implications of failing to come to grips with the Climate Crisis, and the broader Sustainability Crisis behind it (i.e., over-population, food insecurity, water scarcity, sanitation, etc.), are breathtaking in their scope. Consider ...

Right now, it takes 1.5 Earths worth of resources to maintain our current economy. By 2050, assuming only moderate growth, we’ll consume nearly 3 Earths worth. But of course, we only have one planet. Those extra worlds we consume represents debt – assets taken from our children. In ecologic terms, it is called “overshoot.” And living systems cannot long survive in overshoot mode.  John Atcheson, Common Dreams, 3-19-13

The number of people living in extreme poverty could increase by up to 3 billion by 2050 unless urgent action is taken to tackle environmental challenges, a major UN report warned on Thursday. The 2013 Human Development Report hails better than expected progress on health, wealth and education in dozens of developing countries but says inaction on climate change, deforestation, and air and water pollution could end gains in the world's poorest countries and communities. Claire Provost, Guardian, 3-14-13

What will you do, POTUS? Who will you decide to be for all time? Because, whether you know it or not, THIS decision is the defining one.

Richard Power is the author of eight books, including Humanifesto: A Guide to Primal Reality in an Era of Global Peril, Between Shadow and Night: The Singularity in Anticipation of Itself and True North on the Pathless Path: Towards a 21st Century Yoga. Power writes and speaks on spirituality, sustainability, human rights, and security. He blogs at Words of Power and Primal Words of Power, and is a member of the Truthout Board of Advisors. He also teaches yoga.
Posted by Richard Power at 10:27 AM