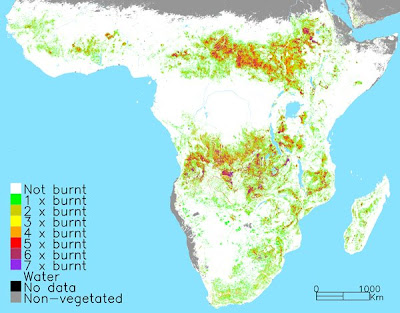 This map shows the occurrence of fire activity in sub-Saharan Africa, determined by detection of the fire scar, for a seven year period 2000-2007. The frequency of fire occurrence is shown in the map, colour coded from regions that burnt once in the seven year period shown in green to regions that burnt during every year of the project shown in purple, Copyright: University of Leicester

The Climate Crisis is complex and paradoxical.

Indeed, all the elements are in the mix of the mayhem.

The soil is drying up in some places, contributing to desertification, methane gases are being released in other places, accelerating the greenhouse gas effect.

And, of course, don't forget the air element: With the year not even half done, 2008 is already the deadliest tornado year in the United States since 1998 and seems on track to break the U.S. record for the number of twisters in a year, according to the National Weather Service. Also, this year's storms seem to be unusually powerful. Associated Press, 5-28-08

But in this Climate Crisis Update the focus is on fire.

In an important project conducted by the University of Leicester, funded by the European Union, and utilizing the SPOT satellite, Dr. Kevin Tansey is mapping fires on a planetary scale.

Since the Millennium, an area larger than the size of India has burnt every year, and (for now) "the majority of the fires occur in Africa."

According to Tansey, "probably 99% of all vegetation fires have a human source."

Tansey is cautious (as a scientist should be) in the conclusions that he draws: With seven years of data, it is not possible to determine if there is an increasing trend in the occurrence of fire, but we have significant year-to-year differences, of the order of 20%, in the area that is burnt.

But I am here to tell you that when there is sufficient data, it will show an increase in the trend of occurence and that increase will be irrefutably linked to the Two-Headed Monster of Climate Change and the Sustainability Meltdown.

A geographer from the University of Leicester has produced for the first time a map of the scorched Earth for every year since the turn of the Millennium.produced for the first time a map of the scorched Earth for every year since the turn of the Millennium.
Dr Kevin Tansey, of the Department of Geography, a leading scientist in an international team, created a visual impression of the fire scars on our planet between 2000 and 2007. The work was funded by the Joint Research Centre of the European Commission.
The map reveals that between 3.5 and 4.5 million km2 of vegetation burns on an annual basis. This is an area equivalent to the European Union (EU27) and larger than the country of India that is burnt every year.
The information is vital for scientists and agencies involved in monitoring global warming, measuring and understanding pollutants in the atmosphere, managing forests and controlling fire and even for predicting future fire occurrence. ...
“We have used the VEGETATION instrument onboard the SPOT European satellite, which collects reflected solar energy from the Earth’s surface, providing global coverage on almost a daily basis.
“When vegetation burns the amount of reflected energy is altered, long enough for us to make an observation of the fire scar. Supercomputers located in Belgium were used to process the vast amounts of satellite data used in the project. At the moment, we have users working towards predicting future fire occurrence and fire management issues in the Kruger Park in southern Africa”.
“The majority of fires occur in Africa. Large swathes of savannah grasslands are cleared every year, up to seven times burnt in the period 2000-2007 (see Figure 1). The system is sustainable because the grass regenerates very quickly during the wet season. From a carbon perspective, there is a net balance due to the regenerating vegetation acting as a carbon sink. Fires in forests are more important as the affected area becomes a carbon source for a number of years.
“The forest fires last summer in Greece and in Portugal a couple of years back, remind us that we need to understand the impact of fire on the environment and climate to manage the vegetation of the planet more effectively. Probably 95% of all vegetation fires have a human source; crop stubble burning, forest clearance, hunting, arson are all causes of fire across the globe. Fire has been a feature of the planet in the past and under a scenario of a warmer environment will certainly be a feature in the future”. Scorched Earth Millennium Map Shows 'Fire Scars', 5-22-08