Food & Financial Sustainability Meltdown: Do You Really Think There are Even 6 Degrees of Separation Between You & People in Burma, Darfur or Congo? 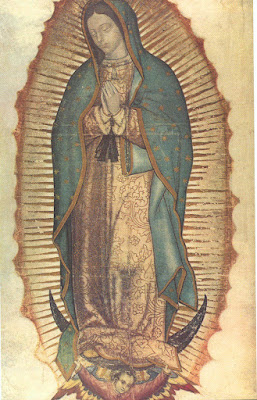 Planetary Food & Financial Sustainability Meltdown: Do You Really Think There are Even Six Degrees of Separation Between You & the People of Burma, or Darfur or Congo?

But tonight, on the Feast of Our Lady of Guadalupe, under the biggest Full Moon seen in 15 years (in the Northern Hemisphere), I will post just this single Global Crisis Update on the Food and Financial Sustainability Meltdown. Because, after all, it is all interconnected, it is all a oneness.

In the 21st Century, economic security cannot be achieved without energy security and environmental security. In the 21st Century, the loss of human rights in one nation diminishes human rights in every nation. The horror that seems to be occurring far away is much closer than you think, and it is moving your way. If you turn your back on your neighbor in need, who will be there for you?

The so-called "Six Degrees of Separation" have collapsed into three, two, one ...

Here are six stories that erase those six degrees of separation -- three on the world food security crisis, and one on 30 additions to the "Dirty List" of corporations enabling the Thugocracy in Burma, along with an extraordinary post from humanitarian activist Mia Farrow now on the ground in the Congo, and an excerpt on Darfur from "Scream Bloody Murder," Christian Amanpour's powerful documentary on the collective failure of the great nations to stop the genocides that have occurred on our watch:

Nicholas D. Kristof on the need for a Secretary of Food:

US Conference of Mayors on homelessness and hunger in the USA:

Out of 25 cities across the United States surveyed by the US Conference of Mayors, 83 percent said homelessness in general had increased over the past year while 16 cities, or nearly two-thirds of those polled, cited a rise in the number of families who had been forced out of their homes. Agence France Press, 12-12-08

The Rome-based organisation said that a preliminary estimate showed the number of undernourished people rose this year by 40m to about 963m people, after rising 75m in 2007. Before the food crisis, there were about 848m chronically hungry people in 2003-05 Financial Times, 12-9-08

30 new companies have been added to the “Dirty List” published today by the Burma Campaign UK. A total of 170 companies feature on the new list. The ‘Dirty List’ exposes companies that are directly or indirectly helping to finance Burma’s brutal military dictatorship. The Burma Campaign UK, 12-11-08 [To read the list, click here.]

Mia Farrow on the ground in the Congo:

People here are tense, even here in Goma, as the fighting -- between Nkunda's rebel ground and Congolese government forces -- took place at the very edge of the city. Outside the city people told me they are terrified-loved ones disappear in the night. They awaken to the sound of gunfire. (The children are to afraid even to go to school as they fear they will be abducted by rebel militia or raped). This is a failed state if ever there was one-a lawless place torn apart by violence. At the gates of UN peacekeepers' barracks, thousands of people are clustered in a makeshift camp. Although the peacekeeping operation (MONUC) has not provided adequate security, their presence is all there is for this traumatized population. Outside the gates I saw children literally starving to death. Mia Farrow, 12-11-08

AMANPOUR (voice-over): Sixty years ago when Raphael Lemkin helped to write the Genocide Convention, he did not have the Internet.
UNIDENTIFIED MALE: In Darfur, we have the power to save lives.
AMANPOUR: Or its ability to mobilize so many.
UNIDENTIFIED MALE: Not on our watch.
AMANPOUR: To speak out so strongly.
UNIDENTIFIED MALE: One more time.
AMANPOUR: Now, genocide has its own grassroots movement. Holocaust survivor Elie Wiesel says it has put genocide on the political agenda.
ELIE WIESEL, HOLOCAUST SURVIVOR: No other tragedy since 1945 has caught the imagination of so many people as Darfur has.
AMANPOUR: Eric Reeves is one of the fathers of the movement. A professor of English at Smith College, Reeves is a self-made expert on Sudan. He runs a one-man war room. Even while fighting his own five- year battle against leukemia.
ERIC REEVES, PROFESSOR: People like me, Khartoum, I've definitely gotten under their skin.
AMANPOUR: Reeves was one of the first activists to call Darfur genocide, early in 2004.
REEVES: I thought that I was creating a moment in which a debate would take place, a debate about what to do. What will we do?
AMANPOUR (on camera): When the answer came, it was a sobering reminder that the U.N. is powerless to force its members to act, even in the face of mass murder. So after four years of U.N. resolutions, there is still no end to this crisis.
REEVES: There was no lack of information. There was no lack of understanding. There was a lack of will to stop genocide. Year after year after year.
AMANPOUR: In 2004, Darfur was finally on the agenda. A Security Council resolution demanded that Sudan disarm the militias attacking the villages. But it issued no ultimatum to back up that demand, not even a trade embargo if Sudan refused.
The main spoiler was China, one of five countries on the Security Council with veto power. China has major construction contracts in Sudan. It buys oil from Sudan, and it sells Sudan its weapons.
REEVES: And at every point China has said no sanctions against Khartoum. None.
AMANPOUR: Sudan said sanctions were unnecessary, because it would punish anyone who committed crimes against civilians. But after two more years of death and destruction, the Security Council voted in 2006 for a peacekeeping force. This time, China went along, as long as the U.N. invited Sudan's consent.
REEVES: That was the phrase that China purchased with its threat of a veto. That invitation was declined.
AMANPOUR: Outraged, Reeves and other activists, including actress Mia Farrow, began putting the squeeze on China. By calling the Beijing Olympics...
UNIDENTIFIED FEMALE: The genocide Olympics.
REEVES: I said, this is the phrase that will hurt China. This is the phrase that will get to China. ...
AMANPOUR: Twenty-six thousand soldiers and police. But after all that, a year into the mission, the force is less than half strength. And Darfur has descended into near anarchy. Bandits routinely hijack U.N. food convoys. U.N. patrols are ambushed. Peacekeepers are stripped of their weapons and even killed.
Despite all this, Eric Reeves believes the unprecedented grass roots protests have not been in vain.
REEVES: Without the outrage by American advocacy, we'd be looking at hundreds of thousands of additional deaths.
AMANPOUR: The prosecutor at the International Criminal Court has charged Sudan's president with genocide. This was the president's defiant response. Why, fourteen years after Rwanda, 60 years after the Genocide Convention, has the world's response in Darfur been so little, so late?
REEVES: That's the question I didn't ask myself forcefully enough, and I can only plead foolishness. CNN,12-4-08