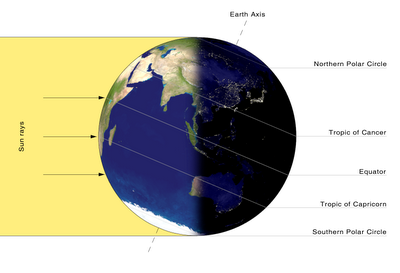 In 1925, Mahatma Gandhi remarked that "Sanitation is more important than political independence." More than 80 years later, access to basic sanitation remains out of reach for 546 million people in sub-Saharan Africa. Inter Press Service, 12-19-08

In a statement the Bank of Japan painted a grim picture of the economy and echoed sentiments that led to the government's prediction of zero growth in real terms for seven years. Agence France Press, 12-19-08

Hurricanes and earthquakes win more headlines but heatwaves claim most lives, according to a survey of mortality from natural threats in the United States. Agence France Press, 12-17-08

The reality of this world is more like a wild dance around a great bonfire than some ancient edifice stumbled upon in the wilderness. The truth of our circumstances is fluid, not solid. You must enter in that wild dance, and feel the rhythm from inside of the circle, you cannot simply sandblast away the sediment of centuries to reveal its stony edifice. The message of our time is only partially revealed in the symphonic silence of the mountains; to grok the whole of it, you must also hear the part that is whispered, wept and wailed in the villages far below.

Reality is fractal, truth is ever evolving. The time for contemplation is past, this is the time for compassionate action. It is a common humanity that must guide us, a shared vision of the oneness. If you know that you are no more are than a single strand in the infinite web of life interconnected with every other strand, and therefore no less than an agent of change that can effect the whole, then you carry this vision inside of you, and you are moving in the exultant heat of that wild dance.

Wherever you live, it is up to you to bring this vision into the public discourse.

Maybe you live in India or Brazil or any of the other G-20 nations, where you have been waiting for the USA and the EU to wake up to the new geopolitical order that is growing up through the cracks and fissures in the old geopolitical order.

Maybe you live in a forsaken and failed nation, where you have been waiting for the great nations, the once and future great nations and the would-be great nations to wake up to the simple truth that the wretchedness of your plight is not as far from their current circumstances as they pretend.

Maybe you live in some place in between one and another of these groupings.

But wherever you live, you can be assured of one painful fact -- it is unlikely that the political establishment, or the mainstream media, or the business community or the religious leadership is really ready to meet the challenges of what the present and future dangers demand of us all.

You must lead them. Of course, they will pretend as they always do that they are leading you, but in reality as it has always been at the watershed moments of human history, it is you who will lead them to the barricades.

Over the last couple of years, I have written of the great and pressing deadlines that we face collectively. One of them has been met. The USA has chosen reason over madness. As vital as that victory of delusion was it was only the beginning.

In 2009, the planet as a whole must meet the deadline of going green, not symbolically or cosmetically, but swiftly and substantially. And it is not really a question of whether or not this can be achieved in the current global financial meltdown and resultant economic crisis; in reality, there is no way out of our dire financial and economic straits other than going green swiftly and substantially.

Another deadline we cannot afford to fail in meeting is achieving the UN Millennium Development Goals by 2015. If our species does not accomplish these tasks, the sustainability and human rights problems that the MDG aim at mitigating will overwhelm us even if the climate crisis does not.

Meanwhile, there are deadlines that we have already missed. They linger, festering on the ground in the world's remote regions, as well as inside of our own troubled psyches. For example, every day that something sweeping and awe-inspiring is not done to stop the slow-motion genocide in Darfur, we are all diminished and further demoralized, whether we acknowledge it or not. Nor can the gang rape of the Congo, the brutalization of Burma, or the systematic cultural dismemberment of Tibet simply be ineffectually fretted over any longer. Concerted, compassionate action must be taken.

You must force all of this to happen. How? By showing your political establishment, mainstream media, business community and spiritual leadership that you understand the reality of the world, and the truth of our circumstances, better than they do, and that they cannot avoid embracing your vision of oneness, collective responsibility, sustainability and compassionate action.

Here are excerpts from four stories that underscore the urgent need for a new vision and a new way, with links to the full texts:

In 1925, Mahatma Gandhi remarked that "Sanitation is more important than political independence." More than 80 years later, access to basic sanitation remains out of reach for 546 million people in sub-Saharan Africa.
In East Africa, not one country is on track to meet Millennium Development Goal Seven, which aims to reduce by half the number of people without access to clean drinking water and decent sanitation by 2015.
Despite governments in the region being signatories to several declarations on improving sanitation, many East African households still lack access to flush toilets or pit latrines. Open defecation is widespread, and 'flying toilets', where people defecate in plastic bags and throw them away at night are the rule rather than the exception in many informal settlements. Inter Press Service, 12-19-08

Evidence of global downturn deepened on Friday as oil prices plunged again, Japan slashed interest rates to near zero to stave off recession and a top banking association warned the world economy will contract in 2009. ... Mature economies -- including the United States, the 15-nation eurozone and Japan -- that are now in recession were forecast to contract a hefty 1.4 percent amid the worst financial crisis since the Great Depression. ... In a statement the Bank of Japan painted a grim picture of the economy and echoed sentiments that led to the government's prediction of zero growth in real terms for seven years. ... "Under these circumstances, economic conditions have been deteriorating and are likely to increase in severity in the immediate future," it said. Agence France Press, 12-19-08

Catastrophes killed more than 238,000 people this year, with cyclone Nargis which swept through Myanmar accounting for more than half the deaths, a study by reinsurer Swiss Re showed on Thursday.
"While the total cost to society was 225 billion dollars (182 billion euros), 50 billion dollars was covered by property insurance, making 2008 the second costliest year ever in terms of insured losses," the world's biggest reinsurer said.
The worst year of natural and man-made catastrophes was 2005, with 374,042 people killed and 107 billion dollars in insured losses. Agence France Press, 12-18-08

Hurricanes and earthquakes win more headlines but heatwaves claim most lives, according to a survey of mortality from natural threats in the United States ... The study is published by an open-access British review, the International Journal of Health Geographics. ... Heat and drought accounted for 19.6 percent of total deaths. This was followed by severe summer weather, where hail, lightning and thunderstorms, accounted for 18.8 percent of deaths; and by severe winter weather, where snow and ice were to blame for 18.1 percent of fatalities. Earthquakes, wildfires and hurricanes were responsible for less than five percent of all deaths from natural hazards combined. Agence France Press, 12-17-08