Past is Prologue: Santayana, History, the Global Economy, the "War on Terrorism" & the Damned -- Where Do You Stand?

Disintegration of the Persistence of Memory, Salvador Dali 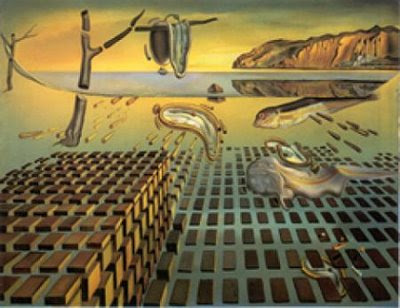 There will come a moment when the most urgent threats posed by the credit crisis have eased and the larger task before us will be to chart a direction for the economic steps ahead. This will be a dangerous moment. Joseph Stiglitz, Vanity Fair, 12-10-08

What we're experiencing now is blowback, the cumulative result of decades of quick fixes and dirty deeds. The carpet's squelching under our feet. Arundhati Roi, 12-12-08

Obviously, the news media should aggressively investigate and report on actual involvement in actual wrongdoing by public figures. There was far too little of that reporting during the Bush administration. (Remember when the media refused to report on the Downing Street Memo? Good times.) Media Matters, 12-12-08

Past is Prologue: Santayana, History, the Global Economy, the "War on Terrorism" & the Damned -- Where Do You Stand?
By Richard Power

This is could well be the last time I post on the Bush-Cheney regime. It has been a long and difficult eight years. Many among us have suffered personally and professionally for daring to stand up both for our country and our common humanity.

Perhaps the biggest frame of all for any meaningful retrospective on the Bush-Cheney regime, and its enablers in the political establishment and mainstream news media, is the frequently cited utterance of the philosopher George Santayana: "Progress, far from consisting in change, depends on retentiveness. ... Those who cannot remember the past are condemned to repeat it."

Of course, this statement is typically referenced to rouse the ire of the civilized world against the crime of genocide; and tragically, time after time since the Holocaust, Santayana's admonishment has been made poignantly relevant again, as one genocide after another has been allowed to proceed.

In addition, a bitter and tainted irony had come to envelope the oft-paraphrased remark ever since it was emblazoned on a banner hanging over Jim Jones' throne in Guyana, providing a backdrop for the swollen, stinking corpses of hundreds of lost souls who had been trapped in his madness and coerced into swallowing the Kool-Aid.

But after the last eight years, the bitter irony enveloping Santayana's warning should leave an even stronger taste in your mouth.

Not just because the genocide in Darfur has unfolded before the diverted eyes of the "civilized world" for these last few years.

But also because the Bush-Cheney regime contemptuously dismissed the lessons of Vietnam in the invasion and occupation of Iraq. Indeed, Colin Powell, the Bush-Cheney regime's own Secretary of State, had articulated the very lessons that were flushed down the toilet in the rush to that foolish military adventure. (To refresh your own memory about the "Powell Doctrine," click here.)

And because, in addition, the Bush-Cheney regime also contemptuously dismissed the lessons of Watergate, COINTELPRO, etc., enshrined, as they were, in the Church Committee's heroic efforts to reaffirm the sanctity of the Bill of Rights. (To refresh your own memory about the the Church Committee, click here.)

Not to mention the Geneva Accords, which are not at all ambiguous about the nature of torture or the banning of it, and the UN Charter, which does not allow a nation to launch unilateral and preemptive war.

Well, as it were not humbling enough to acknowledge that the lessons of Vietnam and Watergate had been dismissed and indeed mocked by Kool-Aid dispensers in high places, now we must also acknowledge that an even older, bigger and more foundational lesson has also been dismissed and mocked by those same Kool-Aid dispensers and their fellow-travelers, i.e., the lesson of the Great Depression and what Herbert Hoover and the philosophy he symbolizes did to precipitate it.

Remember, past is prologue. If you want to take away a lesson from this catastrophe, I suggest this one is fool-proof: Never allow anyone to take the highest office in the land if someone else won the election; never allow what happened in Florida in 2000 or Ohio in 2004 to happen again.

In the spirit of Santayana, as we close out this grim and embarrassing episode in US history, and hopefully move forward together as a nation -- left, right and center -- to heal and restore our traditions, I offer some insights of importance to those of you who wish to remember --

First, in Vanity Fair, Nobel prize winning economist Joseph Stiglitz provides a five point analysis of how we arrive at the threshold of a second Great Depression:

No. 1: Firing the Chairman: In 1987 the Reagan administration decided to remove Paul Volcker as chairman of the Federal Reserve Board and appoint Alan Greenspan in his place.
No. 2: Tearing Down the Walls: The deregulation philosophy would pay unwelcome dividends for years to come. In November 1999, Congress repealed the Glass-Steagall Act-the culmination of a $300 million lobbying effort by the banking and financial-services industries, and spearheaded in Congress by Senator Phil Gramm.
No. 3: Applying the Leeches: Then along came the Bush tax cuts, enacted first on June 7, 2001, with a follow-on installment two years later.
No. 4: Faking the Numbers: ... Unfortunately, in the negotiations over what became Sarbanes-Oxley a decision was made not to deal with what many, including the respected former head of the S.E.C. Arthur Levitt, believed to be a fundamental underlying problem: stock options.
No. 5: Letting It Bleed: The final turning point came with the passage of a bailout package on October 3, 2008-that is, with the administration's response to the crisis itself. We will be feeling the consequences for years to come. Joseph Stiglitz, Capitalist Fools, Vanity Fair, 12-10-08

Second, the brilliant and beautiful Indian writer-activist Arundhati Roy, reflects on the "war on terror" in the wake of the slaughter in Mumbai:

There are those who point out that US strategy has been successful inasmuch as the United States has not suffered a major attack on its home ground since 9/11. However, some would say that what America is suffering now is far worse. If the idea behind the 9/11 terror attacks was to goad America into showing its true colors, what greater success could the terrorists have asked for? The US army is bogged down in two unwinnable wars, which have made the United States the most hated country in the world. Those wars have contributed greatly to the unraveling of the American economy and who knows, perhaps eventually the American empire. (Could it be that battered, bombed Afghanistan, the graveyard of the Soviet Union, will be the undoing of this one too?) Hundreds of thousands people including thousands of American soldiers have lost their lives in Iraq and Afghanistan. The frequency of terrorist strikes on U.S allies/agents (including India) and U.S interests in the rest of the world has increased dramatically since 9/11. George Bush, the man who led the US response to 9/11 is a despised figure not just internationally, but also by his own people. Who can possibly claim that the United States is winning the war on terror? Arundhati Roi, Guardian, 12-12-08

Third, David Brock's Media Matters delivers the discouraging message that for the US mainstream news media, it is business as usual, and that seemingly nothing has been learned in that concentration of opinion-shaping power:

Perhaps the most striking aspect of the media's attempts to link Obama to the Blagojevich scandal has been the volume of news reports that are purely speculative -- and not only speculative, but vaguely speculative. That is, they don't even consist of conjecture about specific potential wrong doing. They simply consist of completely baseless speculation that Obama might in some way become caught up in the investigation at some point in the future, for some reason. It's little more than, "Maybe Obama will be involved." Well, sure. And maybe he'll play shortstop for the Washington Nationals next year. Media Matters, 12-12-08

For an archive of Words of Power posts on 9/11 and Terrorism, click here.