Stepping Back Thru the Looking Glass: The UAW, Caroline Kennedy, Mike Connell, Rick Warren & Our Future 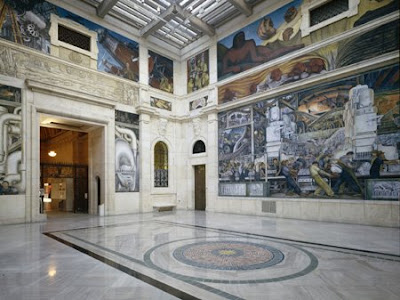 In short:
-Not medical
-Not weather
-Not running out of gas ... Larisa Alexandrovna on the Death of Mike Connell, 12-12-08

The fact is that Caroline Kennedy has a first rate mind and class. She would bring both to the Senate. She's dedicated to education, a real New Yorker, and a woman who has raised her family, hoping now to give back to her country in a manner that is mutually beneficial to all, including New York state. Taylor Marsh, 12-6-08

Stepping Back Thru the Looking Glass: The UAW, Caroline Kennedy, Mike Connell, Rick Warren & Our Future

Perhaps you noticed (and wondered) why I have allowed several important stories -- e.g., the US auto industry crisis,the struggle over the NY Senate seat, the Obama invitation to Rick Warren to perform the inaugural invocation, and the death of Mike Connell -- to develop without offering any analysis.

After the Obama-Biden victory in the November election, I promised myself I would take a couple of steps back from US domestic politics, while following the heat and the action via those established bastions of the alternative media in whom I have great confidence (e.g., Buzzflash, Democracy Now!, Thom Hartmann Show, Crooks and Liars, Think Progress, Raw Story, etc.)

But since we are on the topic of those issues Words of Power has not weighed in on over the last several weeks, indulge me for a few moments:

On the US auto industry crisis: When you consider how easily the political establishment got out your checkbook to reward the recklessness of those who got us all into these dire financial straits, and then how stubbornly that same political establishment refused to write a check for the US auto industry, which had been brought to its knees because of that very recklessness, there are two conclusions to be drawn, 1) the political establishment and the mainstream news media are either in denial about the scope of the dangers ahead, or have suffered debilitating loss of mental faculties after decades of Greenspanitis and the cult of Milton Friedman and 2) much of the skewering of the US auto industry on the air waves and on the floor of the US Senate was simply a bold, naked and desperate attempt to break the back of the United Autoworkers Union (UAW) and by extension break the backs of organized Labor as a whole. This viciousness must not be allowed to succeed.

On the US Senate seat in New York: There are many qualified and worthy candidates for the seat that Hillary Clinton is leaving to become Obama's Secretary of State. So what? I raised myself on the streets of NYC, and I am unabashedly behind the drive to give it to Caroline Kennedy. It would be both a powerful symbolic move at a critical moment and a refreshingly intimate and personal move. Caroline is a different kind of person than the career politicians that largely populate the US Senate. She has made different life choices, and she has accumulated a different life experience. If she makes it to the floor of the US Senate, she will surprise and delight the electorate. Furthermore, on a pragmatic level, the person appointed to that seat will have to face TWO elections in four years. What is most disturbing is the mean-spirited and (as usual with Democrats) self-destructive nature of the attacks against her, in particular from Bill Press on his radio show.

On Rick Warren: The Sermon on the Mount is one of the most extraordinary statements in all of human history, and it is well past time that those who are given the bully pulpit in its name are something more than bullies. We will not know for awhile if this was another brilliant political and psychological move by Obama, or his first really unfortunate blunder in the aftermath of the election. But for now and from here, I concur with Rachel Maddow, it seems to be a "lose, lose proposition" that hints disturbingly at arrogance borne of an incredible hitting-streak.

On the Death of Mike Connell: In the course of the 2008 election cycle, there were two critically important developments in Election Security. It is vital that both are understood. The first critically important development is that at a press conference over the summer, the revelations of Republican information security operative turned whistleblower, William Spoonamore, took us beyond "what if" and "it seems like" and into naming companies and individuals and posting charts of not only what could happen but how it happened and where. The second critically important development was that the progressive movement together with people of good will and reasonableness from both the savaged center and the embarrassed right took back the electoral process (at least for one cycle) and proved an assumption we clung to through the last eight years, i.e., IF the turn-out was big enough and IF the margin of victory was wide enough, the will of the electorate could not be canceled out. Or was it just that the heat was on, and those who dared before did not dare this time? We may never know. Either way there was an historic and desperately necessary victory. So this is a critical juncture -- the movement to restore the integrity and sanctity of your vote must not be abandoned or relegated to obscurity. The great danger incorporated into the process through electronic voting, caging, and other unsafe and unsavory elements, is still with us. Now Connell, named by Spoonamore, is dead. It is important that you understand that protection and immunity had been requested for him from federal and state law enforcement prior to the crash of his small plane. It had not been granted, and he was left vulnerable. You can follow this story closely via those Heroes of the Evolution, Brad Friedman, Mark Crispin Miller and Larisa Alexandrovna, and elsewhere in the alternative media. It is as big as the Don Siegelman story and it must not be allowed to die.
(Click here to watch Amy Goodman's interview with Mark Crispin Miller on Connell's death.)

Restoring the republic was one of the core issues which motivated the founding of Words of Power. Although this struggle is far from over, the course of the future is, for the present, in the hands of sane men and women (i.e., the incoming Obama-Biden administration and a Democratic majorities in both the Senate and the House of Representatives.

I choose the word "sane" because you and I know that the leadership is not nearly progressive enough, but they are, however, sane and responsible, and after the last eight years, I am grateful for "sane" and "responsible."

We will have to monitor the course of events closely and raise bloody hell if it gets off-track or if the pace is too incremental. Given our dire environmental and economic circumstances, "too incremental" is a synonym for national suicide.

Words of Power will be re-focusing on its other core issues, i.e., the Climate and Sustainability Crisis, Human Rights (in particular, Darfur, Burma and the Congo, as well as the empowerment of women and the rescue of child soldiers globally) and Economic Security.

As profound and desperate the victory in November 2008 was, we have several more life or death deadlines rapidly approaching: the nations of the world must act on the Climate Crisis collectively, sweepingly and without delay, in 2009, they must also achieve the UN Millennium Development Goals by 2015; meanwhile, every dawn that breaks is another deadline for the wretched of the earth in Darfur, Burma, the Congo and other hell holes of the world's moral failure; and all of this world of woe is grinding on against the backdrop of a Global Financial and Economic Meltdown that threatens to bottom out in a second Great Depression.