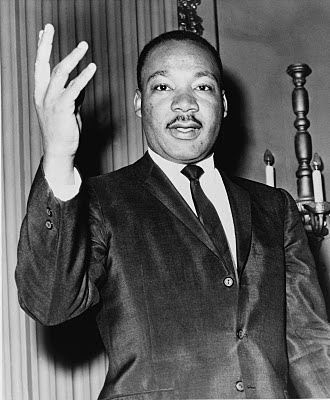 “I am convinced that if we are to get on the right side of the world revolution, we as a nation must undergo a radical revolution of values. We must rapidly begin the shift from a thing-oriented society to a person-oriented society. When machines and computers, profit motives and property rights, are considered more important than people, the giant triplets of racism, extreme materialism, and militarism are incapable of being conquered.” - Martin Luther King, Jr., Beyond Vietnam -- A Time to Break Silence, April 4, 1967

MLK came from the future, and brought with him a message so powerful that its delivery cost the messenger his life.

No monument could ever contain the greatness he conjured, but your radiant mind can mirror it, and your overflowing heart can pour it forth. Choose to live this truth. Choose to live from the future into the now. Choose indomitable compassion and dauntless courage.

"I agree with Dante, that the hottest place in hell is reserved for those who at a time of moral crisis maintain their neutrality ..." -Martin Luther King, Jr., Why I Am Opposed to the War in Vietnam, April 30, 1967

The goddesses of love and justice call to you from the within your psyche.

‎"And of the great problems of history is that the concepts of love and power have usually been contrasted as opposites, polar opposites, so that love is identified with resignation of power, and power with the denial of love ... Now we have got to get this thing right. What is needed is the realization that power without love is reckless and abusive, and love without power is sentimental and anemic. Power at its best is love implementing the demands of justice, and justice at its best is love correcting everything that stands against love. And this is what we must see as we move on." - Martin Luther King, Where Do We Go From Here?, August 16, 1967

The journey is just beginning.

Remember that the visionary power of MLK's dream did not spring from some naive idealism, but from a profound grasp of reality and an extraordinary willingness to embrace any and all consequences of living a truthful live. Yes, and like him, each of us must approach tomorrow, and the next day, and the next, as if it were our "Last Battle on Earth" ...

The Constitution of this country has served us well, but when the Supreme Court says that attempts by the federal government and states to impose reasonable restrictions on campaign ads are unconstitutional, our democracy is in grave danger. That is why I have introduced a resolution in the Senate calling for an amendment to the U.S. Constitution. Sen. Bernie Sanders, Saving Our Democracy, Huffington Post, 12-8-12

MLK would have clearly understood both the challenges and the opportunities of the Climate Crisis - in the their proper context, i.e. economic and moral, and he would have seen Climate Action as a banner under which to unite yellow, brown, red, black and white, he would have recognized it as the penultimate moment, the crescendo of every battle for human rights and environmental protection from the dawn of civilization, and he would not have let this penultimate moment pass without seizing it.

Instead, from Kyoto to Copenhagen to Durbin, we have seen the greatest failure of governance in human history.

Naomi Klein: Personally, I think the greatest possibility lies in bringing together the ecological crisis and the economic crisis. I see climate change as the ultimate expression of the violence of capitalism: this economic model that fetishizes greed above all else is not just making lives miserable in the short term, it is on the road to making the planet uninhabitable in the medium term ... I think climate change is the strongest argument we’ve ever had against corporate capitalism, as well as the strongest argument we’ve ever had for the need for alternatives to it. And the science puts us on a deadline: we need to have begun to radically reduce our emissions by the end of the decade ...Naomi Klein and Yotam Marom, Occupy Wall Street: Why Now? What's Next?, The Nation, 1-10-12

Oh yes, and although he would have marveled at Occupy Wall Street, and all that it has already accomplished in terms of awakening the national psyche, MLK would be relentlessly reminding its participants that this economic injustice did not start with a war on the middle class and its children, no, it started with the war on the poor that replaced the war on poverty.

AMY GOODMAN: ... you have talked about how there are more African Americans percentage-wise imprisoned in the United States, more black people, than were at the height of apartheid South Africa.
MICHELLE ALEXANDER: ... we’ve become blind in this country to the ways in which we’ve managed to reinvent a caste-like system here in the United States, one that functions in a manner that is as oppressive, in many respects, as the one that existed in South Africa under apartheid and that existed under Jim Crow here in the United States ... Through the war on drugs and the "get tough" movement, millions of poor people, overwhelmingly poor people of color, have been swept into our nation’s prisons and jails, branded criminals and felons, primarily for nonviolent and drug-related crimes ... and then are ushered into a permanent second-class status, where they’re stripped of the many rights supposedly won in the civil rights movement ... On Eve of MLK Day, Michelle Alexander & Randall Robinson on the Mass Incarceration of Black America, Democracy Now, 1-13-12

In the decades since his martyrdom, *they* allowed for the establishment of a national holiday in his name, the erection of a monument to him on the mall, and even the ascendancy of an African American to the Oval Office (albeit an Impossible Presidency) and yet, all the while *they* were dismantling everything that truly mattered, brick by brick and tear by tear.

MLK would have seen through it all. But he is long gone.

I Am A Man: Dr. King & the Memphis Sanitation Strike

Welcome to the Anthropocene Age; A Monument to MLK Now Stands on the Mall, Like Kubrick's Obelisk, Mysterious & Otherworldly

Richard Power is the author of seven books, including Between Shadow and Night: The Singularity in Anticipation of Itself and True North on the Pathless Path: Towards a 21st Century Yoga. He writes and speaks on security, risk, human rights and sustainability, and has delivered executive briefings and led training in over 40 countries. He blogs at http://words-of-power.blogspot.com and http://primalwordsofpower.blogspot.com
Posted by Richard Power at 8:20 PM