Yes, Your Leaders Went to Davos, 3 Bare-Breasted Ukrainian Women; & Why You Will Soon Miss the Words, "I'm from the Government & I'm Here to Help You" 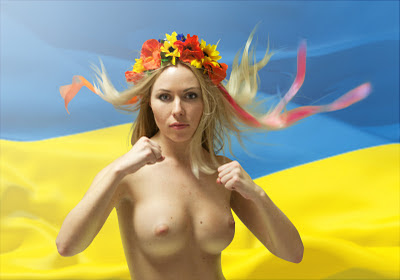 More than 1 million children in the Sahel are at risk of severe malnutrition and urgent action is needed to avert starvation akin to that in Somalia, the United Nations Children's Fund (UNICEF) warned on Friday. Reuters, 1-27-11

More intense heat waves due to global warming could diminish wheat crop yields around the world through premature ageing, according to a study published Sunday in Nature Climate Change. Current projections based on computer models underestimate the extent to which hotter weather in the future will accelerate this process, the researchers warned. Marlowe Hood, Climate-driven heat peaks may shrink wheat crops, Physorg.com, 1-29-11

“We love peace and we hope for peace,” the monk said, adding that mandatory “re-education” classes, often dominated by political and patriotic indoctrination, have been forced on his monastery. The government has said two Tibetans were killed in clashes in the towns of Seda and Luhuo ... Another Tibeten protester was shot dead in Rangtang county, rights groups said ... Agence France Press, 1-29-12

Yes, Your Leaders Went to Davos, Three Bare-Breasted Ukrainian Women; & Why You Will Soon Miss the Words, "I'm from the Government & I'm Here to Help You"

The women of Femen are serious, and brave.

And if you doubt either, you do not understand the vital role of women in the massive, global non-violent evolution that must come; nor do you understand how profoundly exploited women are in the grips of predatory capitalism, particularly in Eastern European and the former Soviet Union.

Three topless Ukrainian protesters were detained Saturday while trying to break into an invitation-only gathering of international CEOs and political leaders to call attention to the needs of the world's poor ... After a complicated journey to reach the heavily guarded Swiss resort town of Davos, the Ukrainians arrived at the entrance to the complex where the World Economic Forum takes place every year. With temperatures around freezing in the snow-filled town, they took off their tops and tried to climb a fence before being detained. "Crisis! Made in Davos," read one message painted across a protester's torso, while others held banners that said "Poor, because of you" and "Gangsters party in Davos." Women of FEMEN Crash "Gangsters Party in Davos" Common Dreams, 1-28-12

Oh yes, BTW, have you ever added up the externalities of fossil fuels? Oil, gas and coal are not cheap energy sources; and they haven't been for a long time, assuming you add in the real costs in terms of the destruction of the environment and the negative impact on public health (not to mention decade after decade of those tax-payer funded subsidies). And now they are threatening to cost us our world itself, i.e., civilization as we know it, and the global climate balance it has been predicated on for millennia. And yet the Chamber of Horrors and its Renfields in both major political parties just want more, and more, at whatever the cost; and so, instead of a Marshall Plan to turn our own economy green, we pursue mountain top removal, fracking and the tar sands pipeline. Madness.

Governments’ failure to regulate business effectively is having a devastating impact on the rights of society’s most vulnerable people, Amnesty International warned today, ahead of this week’s World Economic Forum in Davos. “The economic crisis, and how governments have chosen to address it, poses a clear and unambiguous risk to the rights of people in many countries,” said Amnesty International Secretary General Salil Shetty. “Davos cannot afford to be a congratulatory club for the rich and powerful. We must use this opportunity to challenge the orthodoxy of the policies being pursued and ensure governments meet their responsibilities.” Davos: World Leaders Protecting Business Over Rights in Economic Crisis, Amnesty International, 7-24-12

Do you remember how we fell into these circumstances? Do you understand? Here is all the history you need.

Despite Newt Gingrich's claim that "supply-side" economic theories have "worked," the truth is that America's three-decade experiment with low tax rates on the rich, lax regulation of corporations and "free trade" has been a catastrophic failure, creating massive federal debt, devastating the middle class and off-shoring millions of American jobs. It has "worked" almost exclusively for the very rich, yet the former House speaker and the three other Republican presidential hopefuls are urging the country to double-down on this losing gamble, often to the cheers of their audiences — like one Florida woman who said she had lost her job and medical insurance but still applauded the idea of more "free-market" solutions. Robert Parry, Selling the 'Supply-Side' Myth, 1-28-12

Flawed and conflicted as it was, ours WAS "a government of the people, for the people, by the people," otherwise they would not have been so desperate to demonize and destroy it from within. We will all have reason to rue the day, and many will not live much longer than that, as the Sixth Great Extinction overtakes the planet.

In the face of an unraveling climate system, there is no way that private enterprise alone will meet the threat. And though small “d” democracy and “community” may be key parts of a strong, functional, and fair society, volunteerism and “self-organization” alone will prove as incapable as private enterprise in responding to the massive challenges now beginning to unfold. To adapt to climate change will mean coming together on a large scale and mobilizing society’s full range of resources. In other words, Big Storms require Big Government. Who else will save stranded climate refugees, or protect and rebuild infrastructure, or coordinate rescue efforts and plan out the flow and allocation of resources? It will be government that does these tasks or they will not be done at all. Christian Parenti, Why Climate Change Will Make You Love Big Government; A Secret History of Free Enterprise and the Government That Made It Possible, Tom Dispatch, 2-26-12

But remember, this great duel was fought and WON not so long ago, in the land that the wood for the U.N. General Assembly came from (isn't it good, Norwegian wood?"), and the land that Lisbeth Salander and the Nobel Peace Prize came from too ...

While many of us are working to ensure that the Occupy movement will have a lasting impact, it’s worthwhile to consider other countries where masses of people succeeded in nonviolently bringing about a high degree of democracy and economic justice. Sweden and Norway, for example, both experienced a major power shift in the 1930s after prolonged nonviolent struggle. They “fired” the top 1 percent of people who set the direction for society and created the basis for something different. George Lakey, How Swedes and Norwegians Broke the Power of the ‘1 Percent’ Waging Non-Violence, 1-26-12

Our first step in the USA is to declare that CORPORATIONS ARE NOT PEOPLE, AND MONEY IS NOT SPEECH, and to rid ourselves of this abomination. Go to Move to Amend for more information.

Richard Power is the author of seven books, including Between Shadow and Night: The Singularity in Anticipation of Itself and True North on the Pathless Path: Towards a 21st Century Yoga. He writes and speaks on security, risk, human rights and sustainability, and has delivered executive briefings and led training in over 40 countries. He blogs at http://words-of-power.blogspot.com and http://primalwordsofpower.blogspot.com
Posted by Richard Power at 7:26 PM