The Lexicon of the Lost Language

Dante Gabriel Rossetti - The Damsel of the Sanct Grail (1874) 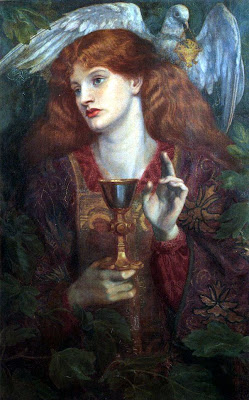 Sometimes there is so much to say, but no one to say it to, and no words to say it with anyway. Sometimes there is only the next breath, and the next step.
After all, the truth is no more than a precious relic, exquisite, but fragile, carried from one century to the next, by a seemingly endless relay of mostly nameless beings. Meanwhile, in road side stalls along the way, cheap knock-offs are sold for a high price by others who have not yet lost their minds so joyously.
The relay assignment comes upon you unexpectedly. Suddenly, every spoke on the Great Wheel cries out in a lost language the knowledge of which is revealed to you for the span of a moment; and then magically you find an exquisite but oh so fragile relic in your hands.
If this happens to you, all you can do is keep moving forward. Once you have seen and felt that rare truth relic, you could never lay it down or pawn it off.

Sooner or later, someone will arrive to take it from you and to this nameless being you will give it freely, and without hesitation.
But after they have departed into the shadows one step beyond where you stand, you will realize that you are that relic, precious and exquisite, and that you have been carried from one century to the next by a relay of mostly nameless beings, and that the lexicon of that lost language is engraved on the brilliant surface of whatever it is that you have become.

-- Richard Power
Richard Power's latest book, Humanifesto: A Guide to Primal Reality in an Era of Global Peril is available now in soft cover and Kindle versions, from Amazon and elsewhere.
Edward Burnes-Jones - The Dream of Launcelot at the Chapel of the San Graal (1895) 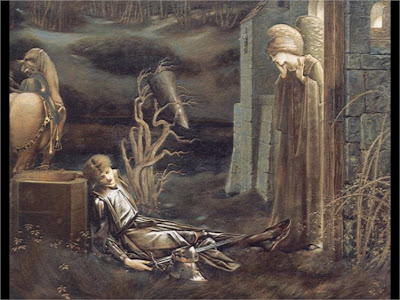