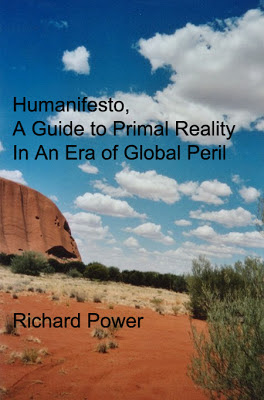 The life journey of Joanna Harcourt-Smith is a compelling story that spans the turbulent history of our remarkable era: from growing up in Paris, where she learned to speak five languages, to living the fugitive life in Afghanistan with her long-time lover LSD pioneer Timothy Leary, from writing "Little Green Book"(widely read in Europe during the 1960s) in response to Mao's "Little Red Book" to hosting the Future Primitive podcast series from Santa Fe, New Mexico since 2006. So it should not be surprising that Joanna recently invited me to engage in one of her Gaialogues, this one introducing my eighth book, Humanifesto: A Guide to Primal Reality in An Era of Global Peril. In this hour-long interview, we explore numerous issues, including the profound challenges of the Climate Crisis, childhood trauma and the power of the Shamanic path, the long-overdue return of the Divine Feminine, the scourges of sociopathy and corporatism, the vital role of women in that great evolutionary leap forward (that must come soon), as well as practical tips on actualizing Gandhi's exhortation to "become the change you seek in the world."

Future Primitive offers a treasure trove of free podcast interviews with a broad spectrum of over 300 iconoclasts and evolutionaries, from Van Jones, , Charles Eisenstein, Daniel Pinchbeck and global trobadour Fantuzzi to Joan Halifax, Riki Ott, Laurie David and Jean Shinoda Bolen. And I am honored to be in their company.