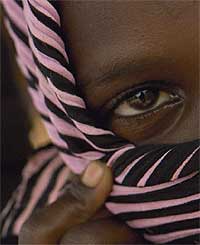 There are several tempting stories to post on in the current news cycle, e.g., who killed former Russian secret agent Alexander V. Litvinenko with radioactive poison in a London sushi bar (he had been investigating the murder of Anna Politkovskaya) or who killed Pierre Gemayel in Lebanon (sixth in a series of deeply disturbing assasinations of anti-Syrian leaders). Well, I suggest that it may not be as simple as Putin in the case of Litvinenko and Politkovskaya or the Syrians in the case of Gemayel, Hariri and the others. In both instances, the truth may be even worse than what "conventional wisdom" suggests.

But I will not be distracted, as most of the world is....

The crisis in Darfur not only continues, it is deepening:

More people have fled their homes in Sudan's Darfur region than at any time since the conflict started nearly four years ago, said the United Nations on Monday in a report on the worsening humanitarian crisis.
"The number of IDPs [internally displaced people] has reached nearly two million, the highest level since the conflict started in 2003 and an increase of [about] 125 000 since the July 1 report," said a summary of the report....
"Another two million Darfurians directly affected by the ongoing crisis are in need of humanitarian aid, again the highest number ... since the beginning of the current crisis," the report added.... UN: Nearly two million displaced in Darfur, Sapa-AFP, 11-27-06

I am posting this GS(3) Thunderbolt to amplify Human Rights Watch's plea to the AU:

The African Union's Peace and Security Council should unanimously support a robust international protection force with the capacity to protect civilians in Darfur and along the Sudan-Chad border, Human Rights Watch said today in a letter to council members before they gather on Wednesday in the Nigerian capital Abuja to discuss Darfur. "The African Union's slogan is 'Africa Must Unite,' and this is exactly what AU members need to do when they meet to discuss Darfur," said Peter Takirambudde, Africa director at Human Rights Watch....
UN Secretary-General Kofi Annan proposed the three-stage hybrid force at a November 16 meeting in Addis Ababa. The proposal apparently includes an additional 10,000 troops under UN command along with UN technical expertise to reinforce the struggling 7,000-member African Union force in Darfur....
"If Africans are serious about protecting Darfur's people, they must stop accepting Khartoum's denials and excuses," said Takirambudde. "The AU should also ensure that any international force in Darfur has the mandate and capacity to effectively protect civilians and is not just the lowest common denominator." African Union: Unite Behind Protection for Darfur, Human Rights Watch, 11-27-06