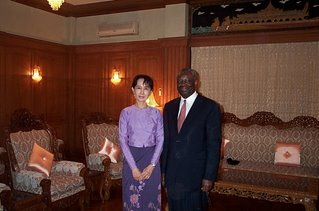 The photo that was released of a smiling Gambari standing alongside a visibly grim Suu Kyi cannot be taken as a sign that his visit caused the regime to change its despotic ways. On the contrary, her pose and expression suggest something like a hostage's resistance to having her photo used for the junta's propaganda purposes. Indeed, Gambari said afterward that she asked to be able to see her doctor more often; in the past, months have gone by without her doctor being allowed to examine her. Boston Globe Editorial, 11-14-06

What kind of men rule Burma? Weak-minded criminals afraid of their own shadows? Well, they should fear their own shadows. Death comes to us all in the end. And at the moment of death, however and whenever it comes to them, they will be shocked by what they see as their lives are mirrored back to them in the clear light of truth.

Now serving her third term of house arrest, Daw Aung San Suu Kyi has been detained for over eleven years. She was arrested on 5-30-03 after the regime's militia attacked her convoy and killed up to 100 of her supporters. (Asian Tribune, Vol. 6, No. 197) Aung San Suu Kyi and other 1400 Burmese political prisoners should be freed immediately.

Here is more from the insightful editorial in the Boston Globe:

THE UNITED NATIONS' special envoy for Burma, Ibrahim Gambari, met over the weekend with the chief of Burma's ruling junta, General Than Shwe, and then with Nobel Peace laureate Aung San Suu Kyi. He was supposed to be delivering a tough message to one of the world's most brutal dictators, and demonstrating solidarity with a woman who has been incarcerated for 10 of the past 17 years because of her devotion to democracy, human rights, and non violence. Instead, he was played for a pawn in the junta's game.
The regime's aim in hosting Gambari was transparent. Having been placed on the agenda of the UN Security Council because of its record of violent repression, forced labor, atrocities against ethnic minorities, and narco-trafficking, the junta faces the prospect of a council resolution demanding substantive changes. As it has done in the past, the regime is seeking to substitute the trappings of diplomatic dialogue for any meaningful political reforms....
What is needed now is for the governments that placed Burma on the Security Council's agenda to adopt a resolution instructing the junta to release all political prisoners, undertake national reconciliation leading to a genuine transition to democracy, and stop the ongoing ethnic cleansing of minorities. This would be the clearest sign that the UN takes seriously the obligation it adopted last year to protect civilian populations from their own abusive regimes.
A glimpse into Burma's cage, Boston Globe, 11-14-06