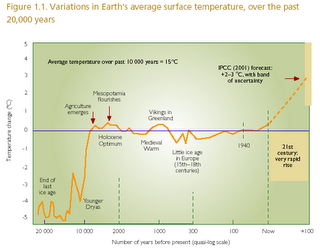 Sweden, Britain and Denmark are doing the most to protect against climate change, but their efforts are not nearly enough, according to a report released Monday by environmental groups. The United States -- the world's biggest emitter of greenhouse gases -- ranked at 53, with only China, Malaysia and Saudi Arabia doing worse. AP, 11-14-06

In an index that ranks the 56 countries (they make up 90 percent of global carbon dioxide emissions) that were part of a 1992 climate treaty or that contribute at least 1 percent of the world's greenhouse gas emissions, the USA ranks 53rd. Only China, Malaysia and Saudi Arabia ranked lower. (AP, 11-14-06)

The Bush-Cheney regime and its enablers in the US mainstream news media and the US Congress have attempted to distort the facts, hide the truth and distract the US electorate. Will it be significantly and substantively different in January when Nancy Pelosi (D-CA) is sworn in as Speaker of the House of Representatives and Sen. Barbara Boxer (D-CA) takes over as chair of the Environment and Public Works Committee?

The EU is exploring the option of imposing a “punitive tariff” on any country that refuses to ratify the Kyoto Protocols. (Der Speigal, 11-16-06) Bravo.

#1: Have you stood on the floor of your legislative chamber to demand urgent action on climate change? Have you introduced or sponsored legislation to compel reductions in the emission of greenhouse gases and the re-tooling of industry, commerce and personal life styles to achieve significantly less destructive carbon footprint?

#2: What have you done in your personal life and in your legislative office to go green? In what ways are you personnally and professionally living and working differently than before? What kind of an example are you setting for your colleagues and your constituents?

#3: Have you gone onto the streets and the airwaves and into community groups to speak directly to your constituents about global warming and climate change? What have you done to raise awareness and educate the citizenry?

Here are three news items, which contain vital information to enrich your conversation with your elected representatives or their staffs:

Sweden, Britain and Denmark are doing the most to protect against climate change, but their efforts are not nearly enough, according to a report released Monday by environmental groups. The United States -- the world's biggest emitter of greenhouse gases -- ranked at 53, with only China, Malaysia and Saudi Arabia doing worse.
``We don't have any winners. We only have countries that are better compared to others,'' said Matthias Duwe of the Climate Action Network-Europe, which released the data at the U.N. climate conference. ``We don't have big shining stars.''
The index ranks 56 countries that were part of a 1992 climate treaty or that contribute at least 1 percent of the world's greenhouse gas emissions. The countries make up 90 percent of global carbon dioxide emissions. Elizabeth A. Kennedy, Nations ranked on global warming: U.S. IS FOURTH WORST IN WORKING TO SLOW CLIMATE CHANGE, Associated Press, 11-14-06

EU climate policy is gearing up to confront the US. Imports from countries that refuse to ratify the Kyoto Protocol could be subject to punitive tariff duties -- a new measure intended to pressure the Bush Administration. A climate tax on flights may also be introduced.
A pollution tax? The EU is considering it.
One press conference followed another at the United Nations climate talks in Nairobi, and everyone got to chime in. The UN, the Climate Change Secretariat, national governments and international bodies like the European Union -- their statements were generally boring, since the summit hadn't arrived at anything new. That changed Wednesday evening, when the EU delegation issued an invitation to the day's final meeting, where a serious threat to the United States was formulated.
Irish EU delegate Avril Doyle said the European Commission was considering a punitive tariff on imports from countries guilty of gross environmental irresponsibility. The measure would specifically target Australia and the United States.
An expert committee or "High Level Group (HLG) on Competitiveness, Energy and the Environment" created by the EU nine months ago is looking into the issue, according to Doyles…. Volker Mrasek, EUROPE LOOKS AT CLIMATE CHANGE Pollution Penalties for the US?, Der Speigel, 11-16-06

The Bush administration and the 109th Congress haven't understood these stakes. Hopefully, the 110th Congress will. Incoming Senate Environment and Public Works chairwoman Barbara Boxer (D-CA) recently said, "Time is running out, and we need to move forward on this." The Bush administration's chief climate negotiator, however, promised conference participants that the White House would continue to do as little as possible…Senate Environment and Public Works chairman James Inhofe (R-OK) has been one of America's most vocal climate skeptics, calling global warming the "greatest hoax ever perpetrated on the American people" and the Kyoto Protocol "a lot of economic pain for no climate gain." (He's wrong.) But when the 110th Congress takes office in January, the new chairwoman, Barbara Boxer (D-CA) has promised to begin "a very long process of extensive hearings" on global warming and hopes to put together a global warming bill that addresses all contributors to carbon dioxide emissions. "He [Inhofe] thinks global warming is a hoax and I think it is the challenge of our generation," Boxer said recently. "We have to move on it." In the House, Rep. John Dingell (D-MI), who is poised to take over as the Energy and Commerce Committee, is expected to hold a series of hearings on global warming. Incoming chairman of the House Government Reform Committee, Henry Waxman, will likely "conduct extensive oversight of federal agency efforts on environmental and energy matters, primarily climate change." ENVIRONMENT, Changing Climate Apathy, Center for American Progress, 11-15-06