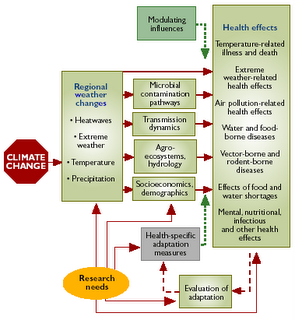 Environmental security and energy security are interdependent challenges, and they are inextricably intertwined with political and economic security.

Global warming (a.k.a. "Climate Change") is the number one national security issue for every government and the number one security risk for every business. Unfortunately, too few organizations have come to grips with this truth or begun to grapple with its implications.

In the 21st Century, there can be no security without sustainability.

There are many profound aspects to this crisis.

The economic dimension of it is perhaps the most important of all, because its math is inescapable; global warming not only impacts the bottom line, it threatens to obliterate it.

Although the economic card is the one we need to play in dealing with business and government, the spiritual and psychological aspects of the crisis should not be overlooked.

What would be the psychological and spiritual impact of a world without birds?

"Unchecked climate change could force up to 72 percent of the world's bird species into extinction but the world still has a chance to limit the losses, conservation group WWF said in a report..."(Reuters, 11-14-06)

Are you spiritually and psychologically prepared for the deforestation of the planet?

"Deforestation remains the greatest current threat to the world's forests, claiming 10 to 15 million hectares of tree-covered areas every year, but climate change may represent a bigger challenge in the long term, scientists say..." (Inter Press Service, 11-20-06)

Here are brief excerpts from these and other important news and op-ed pieces, with links to the full texts:

So now macroeconomic equations include a new variable: the climate. Or rather, several new variables, given how numerous the variables subject to effects from global warming are....Economists' appropriation of the climate question is salutary. It alone will allow the broader mobilization beyond Kyoto of political officials for whom the increase in average earth temperatures of 2 or 3 degrees Centigrade is frequently a pure abstraction only....Two degrees higher average global temperature (a very optimistic scenario for the end of the century) means the complete disappearance of the Andean glaciers, for example. And, more generally, an even more intense withdrawal of all high elevation glaciers in the middle latitudes. With, as an immediate corollary, a significant drop in water availability in numerous regions. To maintain the structure of the occupation of those territories, heavy investments will be unavoidable. High-elevation water retention facilities, establishment of desalination factories and new water transportation networks, etc....Two more degrees means agricultural yields reduced by 20-30 percent along the Mediterranean basin and in Sahelian Africa. Hence, increased migratory pressure with its cortège of economic and political consequences. Two degrees more also means, according to the scientific literature cited by the Stern report, 15 to 40 percent of animal and vegetable species condemned to rapid extinction by virtue of the disappearance of their habitat. There again, the abstraction may leave you unmoved, even make you smile: could the global economy easily get by without biodiversity? No, answer the United Nations agencies and NGOs involved in environmental protection....In [free market, economically] liberal circles, people freely express the idea that protection of the environment is an illusory objective if it runs counter to the economy. Perhaps that's true. One thing is certain; the statement may be reversed: the economy will not withstand a massive degradation of the environment. Not concerned by Kyoto, the Chinese government - which one could not easily tax with ecological fanaticism - seems finally to have understood that. It has just allocated the colossal sum of 175 billion dollars to an environmental protection program that is supposed to last five years. Stéphane Foucart, Climate: A Matter for Economists, Le Monde, 11-17-06

Deforestation remains the greatest current threat to the world's forests, claiming 10 to 15 million hectares of tree-covered areas every year, but climate change may represent a bigger challenge in the long term, scientists say...Forests and other forms of life are now living on an "alien" planet where the levels of carbon dioxide and other greenhouse gases in the atmosphere are higher than they have been for a million years...What does this mean for the 20 percent of the Earth's original forests that are still standing? Some scientists believe forests will grow faster in a warmer world. Others say they are more likely to burn, or suffer from disease or die from drought. Laurance and his colleagues have shown that the higher levels of carbon dioxide in the atmosphere are changing the very nature of the existing forest in the Amazon. "Trees in the rainforest are growing faster and dying faster, and changing in species composition," he said, adding that the long-term implications of these changes are not known. Stephen Leahy, Will Forests Adapt to a Warmer World?, Inter Press Service, 11-20-06

Unchecked climate change could force up to 72 percent of the world's bird species into extinction but the world still has a chance to limit the losses, conservation group WWF said in a report on Tuesday.
From migratory insect-eaters to tropical honeycreepers and cold water penguins, birds are highly sensitive to changing weather conditions and many are already being affected badly by global warming, the new study said.
"Birds are the quintessential 'canaries in the coal mine' and are already responding to current levels of climate change," said the report, launched at a United Nations conference in Kenya on ways to slow warming.
"Birds now indicate that global warming has set in motion a powerful chain of effects in ecosystems worldwide," WWF said.
"Robust evidence demonstrates that climate change is affecting birds' behavior - with some migratory birds even failing to migrate at all. Global Warming Could Wipe Out Most Birds: WWF, Reuters, 11-14-06

Global warming could stoke ferocious wildfires that will be more difficult and costly to fight and might drastically alter the environment in parts of the world, some scientists warn. Approximately 1,000 scientists and forestry officials who gathered in San Diego for an international wildfire meeting that began Monday urged policymakers to consider the effects of global warming when managing wildfires. The wildfire season that just ended in the US was the most severe - and expensive - on record with more than 89,000 fires scorching 9.5 million acres, according to the National Interagency Fire Center. The US Forest Service spent $1.5 billion fighting those fires - about $100 million over budget....
Battling wildfires has been complicated by thick forest undergrowth and the increasing encroachment of people near forest land....Scientists suggest, among other things, that regions most at risk be targeted for controlled burn programs. Scientists say an explosion of wildfires will increase fire costs and that old techniques may have little effect in controlling fires. Alicia Chang, Scientists: Climate Change Fueling Fires, Associated Press, 11-14-06