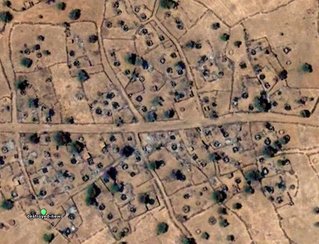 Hard Rain Journal 12-10-06: Human Rights Update -- Annan Speaks Out on Darfur, Carter Speaks Out on Palestine....Have You? Have Your Elected Representatives?

The chaos and violence are spreading.

Humanitarian crises are escalating in Afghanistan, Iraq, Palestine and Darfur...

The pools of blood are spreading. Look at the map. What will happen when they merge? Will we all choke on the catastrophe?

Meanwhile, in the corridors of executive power and on the commercial air waves, these humanitarian crises are still discussed in abstract terms -- as military and geopolitical issues -- by people whose infrastructure has not been destroyed, and whose families have not been massacred.

In two of these situations, the Bush-Cheney national insecurity team, and its enablers in the US political establishment and the US mainstream news media, are directly responsible: in Iraq, it was the illegal invasion that led to the destruction of the infrastructure and the incompetent occupation that led to the chaos and the sectarian violence; in Afghanistan, the Taliban has returned because the Bush-Cheney regime turned away from the situation too quickly in its haste to pursue its foolish military adventure in Iraq.

First, we must give real meaning to the principle of “Responsibility to Protect”....The tragedy of Darfur has raged for over three years now, and still reports pour in of villages being destroyed by the hundred, and of the brutal treatment of civilians spreading into neighbouring countries. How can an international community which claims to uphold human rights allow this horror to continue?
There is more than enough blame to go around. It can be shared among those who value abstract notions of sovereignty more than the lives of real families, those whose reflex of solidarity puts them on the side of governments and not of peoples, and those who fear that action to stop the slaughter would jeopardize their commercial interests.
The truth is, none of these arguments amount even to excuses, let alone justifications, for the shameful passivity of most governments. We have still not summoned up the collective sense of urgency that this issue requires.
Some governments have tried to win support in the global South by caricaturing responsibility to protect, as a conspiracy by imperialist powers to take back the hard-won national sovereignty of formerly colonized peoples. This is utterly false.
We must do better. We must develop the responsibility to protect into a powerful international norm that is not only quoted but put into practice, whenever and wherever it is needed.
Above all we must not wait to take action until genocide is actually happening, by which time it is often too late to do anything effective about it. Two years ago I announced an action plan for the prevention of genocide, and appointed a Special Adviser to help me implement it.
While his work has been extremely valuable, much more needs to be done. I hope my successor will take up this banner, and that member states will support him.
Second, we must put an end to impunity....
Third, we need an anti-terrorism strategy that does not merely pay lip-service to the defence of human rights, but is built on it....
Fourth, let’s not content ourselves with grand statements of principle. We must work to make human rights a reality in each country....
The truth is, it’s not enough just to have the right principles and say what we think should happen. We also have to ask who is going to make it happen. Who can we look to for support? Who is going to insist that these principles are acted on?
First, I look to Africa to take the lead.
Africa’s many conflicts are, almost invariably, accompanied by massive human rights violations. Unless Africa wholeheartedly embraces the inviolability of human rights, its struggle for security and development will not succeed....
Secondly, I look to the growing power of women – which means we must give priority to women’s rights.
The “equal rights of men and women”, promised by the UN Charter 61 years ago, are still far from being a reality. The UN can and must play a greater role in empowering women, and to do so, will require a strengthening of the UN’s gender architecture. I strongly encourage member states to make this a real priority.
And thirdly, I look to civil society – which means you!
We need dedicated individuals and dynamic human rights defenders to hold governments to account. States’ performance must be judged against their commitments, and they must be accountable both to their own people and to their peers in the international community. Thank God, then, for the growth in human rights NGOs we have witnessed in the last decade. There are now an estimated 26,000 of them worldwide, specializing in issues from trafficking to torture, from HIV/AIDS to the rights of children and migrants....
ADDRESS TO MARK INTERNATIONAL HUMAN RIGHTS DAY, 12-8-06

The many controversial issues concerning Palestine and the path to peace for Israel are intensely debated among Israelis and throughout other nations — but not in the United States. For the last 30 years, I have witnessed and experienced the severe restraints on any free and balanced discussion of the facts. This reluctance to criticize any policies of the Israeli government is because of the extraordinary lobbying efforts of the American-Israel Political Action Committee and the absence of any significant contrary voices.
It would be almost politically suicidal for members of Congress to espouse a balanced position between Israel and Palestine, to suggest that Israel comply with international law or to speak in defense of justice or human rights for Palestinians. Very few would ever deign to visit the Palestinian cities of Ramallah, Nablus, Hebron, Gaza City or even Bethlehem and talk to the beleaguered residents. What is even more difficult to comprehend is why the editorial pages of the major newspapers and magazines in the United States exercise similar self-restraint, quite contrary to private assessments expressed quite forcefully by their correspondents in the Holy Land....
Book reviews in the mainstream media have been written mostly by representatives of Jewish organizations who would be unlikely to visit the occupied territories, and their primary criticism is that the book is anti-Israel. Two members of Congress have been publicly critical. Incoming House Speaker Nancy Pelosi for instance, issued a statement (before the book was published) saying that "he does not speak for the Democratic Party on Israel." Some reviews posted on Amazon.com call me "anti-Semitic," and others accuse the book of "lies" and "distortions." A former Carter Center fellow has taken issue with it, and Alan Dershowitz called the book's title "indecent"....
The book describes the abominable oppression and persecution in the occupied Palestinian territories, with a rigid system of required passes and strict segregation between Palestine's citizens and Jewish settlers in the West Bank. An enormous imprisonment wall is now under construction, snaking through what is left of Palestine to encompass more and more land for Israeli settlers. In many ways, this is more oppressive than what blacks lived under in South Africa during apartheid. I have made it clear that the motivation is not racism but the desire of a minority of Israelis to confiscate and colonize choice sites in Palestine, and then to forcefully suppress any objections from the displaced citizens. Obviously, I condemn any acts of terrorism or violence against innocent civilians, and I present information about the terrible casualties on both sides. Jimmy Carter, Speaking frankly about Israel and Palestine, LA Times, 12-8-06

And please buy two copies of Jimmy Carter's Palestine: Peace Not Apartheid, one for yourself and one for someone else.