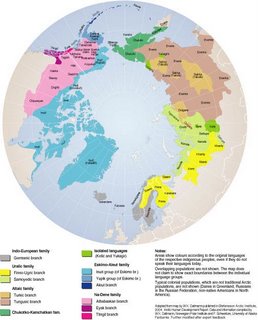 Image: Demography of indigenous peoples of the Arctic based on linguistic groups, UNEP/GRID-Arendal

Switzerland's Walter Kälin, who drew up the blueprint for the Human Rights Council, tells swissinfo where it is going wrong and what needs to be done...
swissinfo: Right now the council is clearly not functioning properly. Do you believe it can do so in the future?
Walter Kälin: The start has been rather bad, that's very clear. But what we are experiencing now is a reflection of the present state of the world in general, with international relations in disarray. This is having an impact on all international bodies...What I fear is that the present political atmosphere in the council will have a negative impact on decisions regarding the mandates of special rapporteurs and what the universal periodic review will look like. If the new framework for these important mechanisms turns out to be a weak one, then we have a very serious problem. Which way now for UN human rights body? Walter Kälin, says the council reflects the generally poor state of international relations, Swiss Info

Human Rights Update -- Unless You Protect the Rights of Women, Children and Indigenous Peoples, You Cannot Achieve Real Security or Sustainability

You cannot establish any of these three conditions, in any meaningful way, without also establishing the other two.

Real security cannot be achieved if children are being systematically brutalized, women systematically aggressed and indigenous people systematically eradicated. Why? Even if in such a world you succeeded in achieving some temporary façade of stability and security, there will be a reckoning -- because of the sickness you allowed to fester inside of yourself and others.

You may feel safe. But you are not.

Security and intelligence professionals should champion Human Rights in general, and the Millennium Goals, the Convention for the Rights of the Child, and the Draft Declaration on the Rights of Indigenous Peoples in particular, as integral aspects of any comprehensive plan to achieve regional or global security. Professional associations for security and intelligence professionals should embrace them, think tanks focused on risk and security should promote them, political leaders who have cultivated risk and security as important elements of their programs or portfolios should campaign for them.

There have been some important developments recently in the global struggle to protect women, children and indigenous people.

First, UN Secretary-General Kofi Annan has just issued a report, based on insights from Radhika Coomaraswamy, special representative on children and armed conflict, that underscores the effect of war on millions of children world-wide. Second, the UN Security Council will debate this topic Tuesday under the leadership of Council president Jorge Voto-Bernales. Third, pretrial hearings have begun for the International Criminal Court case against Congolese warlord Thomas Lubanga, who is charged with forcing children, some as young as 10 years old, into his militia.... Donald Steinberg, When war and children collide, Christian Science Monitor, 11-27-06

Both Steinberg and Neuwirth urge greater urgency and impetus.

In regard to the plight of children in war zones, Steinberg calls for two additional actions:

First, incoming UN Secretary-General Ban Ki Moon should present to the UN Security Council and General Assembly an action plan within the first 100 days of his term that begins on Jan. 1, 2007, to mobilize all United Nations agencies to protect children from armed conflict. Second, the newly elected US Congress should ratify the UN Convention on the Rights of the Child, which commits governments to ensure that children are protected from abuse and mistreatment. The United States signed the convention in 1995, but, except for Somalia, is the only country yet to ratify it....If America will not take leadership in the struggle to protect the most vulnerable in our world from violence, who will?

"Active leadership...to ensure that this initiative is not just another United Nations report followed by yet another General Assembly resolution deploring violence against women but doing nothing to ensure that states take concrete steps to address it effectively."

Unfortunately, as the following statements from the International Work Group for Indigenous Affairs (IWGIA) and the Indigenous Peoples Caucus (IPC) explain, the most significant human rights development in recent weeks, one relating to the rights of indigenous peoples, was also the most disappointing:

More than two decades of efforts to promote international human rights standards for the safety and well-being of Indigenous Peoples appear to have failed following the adoption of a motion by the Third Committee of the UN General Assembly on 28th November to defer the historic adoption of the UN Declaration on the Rights of Indigenous Peoples. The motion, promoted by few Western countries and put forward by the Namibian delegation on behalf of the African Group of States, was put to the vote with a majority of 82 nation states in favour, 67 against and 25 abstentions.
As a non-governmental organization devoted to promoting the rights of indigenous peoples worldwide and which has, from the very beginning, been directly involved in the discussions regarding the UN Declaration on the Rights of Indigenous Peoples, IWGIA wishes to make known its immeasurable dismay and concern at the decision taken yesterday by the Third Committee of the UN General Assembly. We fear this may mean that the United Nations will never adopt a strong international human rights standard that promotes and respects the fundamental rights of indigenous peoples.
We also believe that the General Assembly’s failure in this regard is a serious setback for the integrity of the newly-established Human Rights Council. The Council, mandated by the General Assembly itself to promote universal respect for the protection of human rights and fundamental freedoms for all, had urged the General Assembly to formally adopt the Declaration without delay.
By not adopting the UN Declaration on the Rights of Indigenous Peoples, the UN General Assembly has undoubtedly not only deafeningly failed to enhance the capacity of the international human rights system to address some of the most pervasive and reprehensible human rights violations in the world today but has also missed an historic opportunity to advance the rights and aspirations of the world’s indigenous peoples.
The ambiguity of the resolution adopted by the Third Committee makes it very difficult to predict the future that lies ahead for the Declaration. The current text is the result of more than 22 years of arduous dialogue between indigenous peoples and governments and is now widely accepted among those who have been involved in this process. We therefore believe that yet more months of undefined government consultations will in no way improve its chances of being adopted but can rather be seen as an attempt by governments such as Australia, New Zealand, the USA and Canada - who have stubbornly opposed the Declaration’s text as adopted by the Human Rights Council - to butcher it or to block its final adoption all together. We are sure that the current disappointment and dismay that indigenous peoples, human rights NGOs and international institutions are feeling today is also shared by those governments who are strongly committed to advocating for adoption of the Declaration.
Given that it is difficult to envisage, at this moment in time, what the full significance and implications of the passing of Namibia’s resolution will be, it is essential that all those governments who have been thus far committed to the UN Declaration on the Rights of Indigenous Peoples redouble their efforts and work, together with indigenous peoples, to promote the General Assembly’s adoption of the text approved by the Human Rights Council in June 2006.
UN General Assembly fails to bring hope to world’s indigenous peoples, IWGIA, 11-06

The Indigenous Caucus is shocked and outraged by the actions of the United Nations, who today failed to adopt the most important international instrument for the promotion and protection of human rights for Indigenous Peoples. The Declaration on the Rights of Indigenous Peoples, which represents more than 20 years of work within the UN, constitutes the minimum standards for their survival, dignity and well-being.
The newly created UN Human Rights Council, which is the premier international body to deal with human rights, adopted the Declaration in June of this year.  The Declaration was one of the substantial achievements of the Council.  However, it was delivered a huge blow today by African States, most of whom had chosen not to participate throughout this standard-setting process. Africa took the lead in blocking the adoption of the Declaration, which strategy was supported and encouraged by New Zealand, Canada, Australia and the United States.
It is clear that these actions are a politicization of human rights that show complete disregard for the ongoing human rights abuses suffered by Indigenous Peoples. This betrayal and injustice severely impacts 370 million Indigenous people in all regions of the world, who are among the most marginalized and vulnerable.
On May 24, 2002, Secretary General Kofi Annan, had proclaimed that the world's Indigenous Peoples "have a home at the United Nations"
However, today's vote by opposing States clearly demonstrates that this is not the case.
INDIGENOUS PEOPLES' CAUCUS, UN affirms Indigenous Peoples are not equal to all other Peoples, 11-28-06