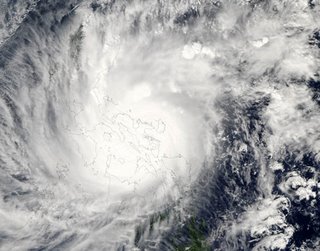 Over one thousand people are dead and one million homeless in the wake of the super-typhoon Durian, the fourth major storm to hit the Philippines in the last three months.

Many of the deaths from Durian are a result of large-scale mudslides, which wept away entire villages. The typhoon, or hurricane as it would be called in the west, is reported to have destroyed or damaged more than 100 000 homes....A recently released Greenpeace report “Crisis or Opportunity: Climate Change Impacts and the Philippines,” shows that from 1975 to 2002, intensifying tropical cyclones resulted in losses of 4.578 billion pesos due to damage to property, including damage to agriculture worth 3.047 billion pesos. The report warned that the impacts of climate change would be most catastrophic to countries who are the least able to cope. Greenpeace, Environmentalist's climate change warnings after Philippines typhoon, Green Clippings, 12-3-06

The news from India and Nepal is also of great concern.

Nepal is on the front line of climate change and variations on Khetbari's experience are now being recorded in communities from the freezing Himalayas of the north to the hot lowland plains of the south. For some people the changes are catastrophic....Anecdotal observations are backed by scientists who are recording in Nepal some of the fastest long-term increases in temperatures and rainfall anywhere in the world. At least 44 of Nepal's and neighbouring Bhutan's Himalayan lakes, which collect glacier meltwater, are said by the UN to be growing so rapidly they they could burst their banks within a decade. Any climate change in Nepal is reflected throughout the region. Nearly 400 million people in northern India and Bangladesh also depend on rainfall and rivers that rise there.
"Unless the country learns to adapt then people will suffer greatly," says Gehendra Gurung, a team leader with Practical Action in Nepal, which is trying to help people prepare for change. In projects around the country the organisation is working with vulnerable villages, helping them build dykes and set up early warning systems. It is also teaching people to grow new crops, introducing drip irrigation and water storage schemes, trying to minimise deforestation which can lead to landslides and introducing renewable energy. John Vidal, Nepal's farmers on the front line of global climate change, Himalayan communities face catastrophic floods as weather patterns alter, Guardian, 12-2-06

India's monsoon rains have intensified over the last half-century as average temperatures have risen, and more severe weather could be in store if global warming continues, scientists reported....Heavy rains come more frequently and are more severe now than they were in 1951, the researchers wrote in the journal Science...."The extreme events are so damaging because they pour in a large amount of rainfall over a small area in a very short time, leading to flash floods and landslides," B.N. Goswami of the Indian Institute of Tropical Meteorology wrote in answer to e-mailed questions....If this trend continues, the number of extreme rain events could reach 100 per year, more than double the 45 or so such events common in the 1950s in central India, he wrote. India monsoons worsen as climate changes-study, Reuters, 11-30-06

Meanwhile, the evidence mounts that global warming is already negatively impacting crop yields and could produce "large-scale famines" and "large-scale human migration" if not mitigated and adapted to.

The global network of agricultural research centres warns that famines lie ahead unless new crop strains adapted to a warmer future are developed. The Consultative Group on International Agricultural Research (CGIAR) says yields of existing varieties will fall.
New forecasts say warming will shrink South Asia's wheat area by half..."We're talking about a major challenge here," said Louis Verchot of the World Agroforestry Centre (Icraf) in Kenya, a member institute of CGIAR.
"We're talking about challenges that have to be dealt with at every level, from ideas about social justice to the technology of food production," he told the BBC News website.
"We're talking about large scale human migration and the return to large-scale famines in developing countries, something which we decided 40 or 50 years ago was unacceptable and did something about." Richard Black, New crops needed to avoid famines, BBC, 12-5-06

Researchers working for the University of California on Monday said that reducing human-generated air pollution would help reverse some of the harm done to India's rice harvest. Providing the country's agricultural data, their study shows that rice yields had been on a decline after surging to an all-time high in the 1960s and 1970s. An analysis revealed the declining yield was caused by two environmental factors – atmospheric brown clouds and global warming. Ravi Chopra, Pollution haze blamed for India's declining rice yields: research, Earth Times, 12-5-06
Image: CIMMYT 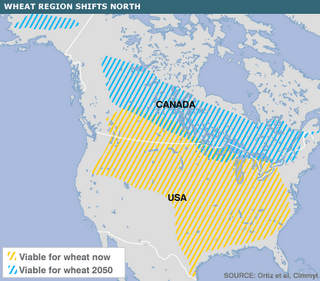 Rice yields are crashing as a result of global warming at twice the rate predicted by climate modellers, according to the first “real world” experiment on the impact of rising temperatures.
The detailed study of crop yields and temperatures took place on long-standing research plots at the International Rice Research Institute at Los Banos in the Philippines. The results suggest that global rice yields could potentially fall by a catastrophic 50 per cent during this century.
The study found that on the Los Banos plots, “the 0.7°C increase in the mean daily temperature was associated with a rice yield decrease of 10 per cent – substantially greater than previous estimates”, says Kenneth Cassman from the University of Nebraska in Lincoln, and one of the research team.
Past predictions of future rice yields have forecast declines of five per cent for an increase of 0.7°C. But Cassman told New Scientist that those predictions are too low, because they missed the fact that global warming is most intense at night, when tropical plants need to cool off and respire.
Journal reference: Proceedings of the National Academy of Sciences (DOI: 10.1073/pnas.0403720101) Fred Pearce, Rice yields plunging due to balmy nights, New Scientist, 6-29-04

The governments of the world must act urgently and decisively. But the governments of the world will not act urgently and decisively unless the world's people, led by its scientists and true spiritual leaders, rise up and demand it. Like Al Gore, and many others, I do not believe it is too late. But even if James Lovelock is right, and it is already too late, at least the struggle to mitigate and adapt will have prepared the human population of the planet for the drastic changes that will unfold if Lovelock's vision comes true.

Lovelock said temperature rises of up to 8C were already built in and while efforts to curb it were morally commendable, they were wasted.
"It is a bit like if your kidneys fail you can go on dialysis -- and who would refuse dialysis if death is the alternative. We should think of it in that context," he said.
"But remember that all they are doing is buying us time, no more. The problems go on," he added....
"In the change from the last Ice Age to now we lost land equivalent to the continent of Africa beneath the sea," he said. "We are facing things just as bad or worse than that during this century."
"There are refuges, plenty of them. 55 million years ago ... life moved up to the Arctic, stayed there during the course of it and then moved back again as things improved. I fear that this is what we may have to do," he added....
China is building a coal-fired power station a week to feed rampant demand, and India's economy is likewise surging.
If either suddenly decided to stop their carbon-fuelled development to lift their billions of people out of poverty they would face a revolution, yet if they continued, rising CO2 and temperatures would kill off plants and produce famine, he said.
"If climate change goes on course ... I can't see China being able to produce enough food by the middle of the century to support its people. They will have to move somewhere and Siberia is empty and it will be warmer then," he said. Jeremy Lovell, Gaia Scientist Lovelock Predicts Planetary Wipeout, Reuters, 11-29-06

If you want to help the people of Nepal cope with the impact of climate change, contact Practical Action Nepal