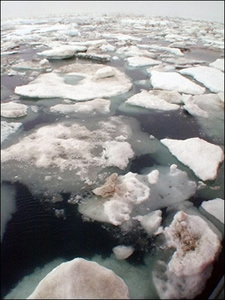 The Arctic could lose virtually all its summer sea ice by the year 2040 - 40 years earlier than previously thought - according to a study by leading climate scientists. (Independent, 12-12-06)

"I think we need a 'carbon freeze,' " Gore told policy and business leaders Friday at a conference organized by a venture capital firm. "I intend to launch an ongoing campaign of mass persuasion at the beginning of 2007." (Boston Globe, 12-10-06)

Al Gore is preparing to launch a grassroots movement for a Carbon Freeze:

I think we need a mass movement in the United States. I think it ought to start at the grass roots," said Gore....Gore said the power of the freeze demand is that it can operate at every level of society -- individuals can take steps to cut their use of nonrenewable energies, and so can businesses and local and state governments. (Boston Globe, 12-10-06)

There are three damn good reasons for the "Carbon Freeze" movement:

1. In the long term, it could save civilization.

3. It could also save the US economy, which in its current oil-based form is perilously vulnerable to disruption in the flow or manipulation of the market.

Predicated on nothing more than a neo-con wet dream, the Bush-Cheney regime's geopolitical and military "strategery" in the Middle East has led us off a high cliff; we are dangling over the abyss, clinging to the edge with the fingers of one hand -- and the name of Sen. Tim Johnson (D-SD) is written on one of those clenched fingers.

King Abdullah has reportedly warned Bush-Cheney that "Saudi Arabia would respond to an American withdrawal from Iraq by funding and arming Sunni insurgents to prevent them being massacred by Shia militias..."(Telegraph, 12-14-06)

Aren't the Saudis already funding the Sunni insurgency? Or have the insurgents been running on the nine billion dollars the gang who couldn't loot straight "lost"?

And why does the US government persist in claiming that the Saudis -- who promote Wahhabi extremism globally, and whose own citizens attacked the USA on 9/11 -- are our "allies" in the so-called "war on terror"?

Of course, acknowledging the sinister duplicity of the Saudis does not mean that their sworn enemies, Iran's Shia extremists, offers the USA a viable alternative as a regional ally.

This week, in Tehran, "an Iranian-sponsored conference on the Holocaust opened...to a worldwide chorus of denunciation, with the main topic on the agenda being whether the Holocaust actually happened." (Haaretz, 12-12-06)

But with the men and women of the US military being killed by extremists on both sides of the civil war in Iraq, the Bush-Cheney regime, dangerously delusional, is going to ask the US Congress for one hundred billion more dollars for its foolish military adventures in the Middle East. (CNN, 12-13-06)

Unfortunately, there probably won't be enough members of Congress with the courage and vision to reject this insanity and demand that the US military be withdrawn from Iraq (ala the Murtha or Feingold plans) and that the hundred billion dollars, instead, be invested as a down payment on the reorientation of the US economy to alternative (i.e., clean, sustainable and bloodless) energy resources.

Al Gore plans to start a grass-roots political movement next month to seek a "freeze" on carbon emissions that scientists say are to blame for global warming. The former vice president's campaign is modeled after the nuclear freeze movement of the 1980s. Gore said he planned to enlist groups ranging from entrepreneurs and activists to political leaders to push for stronger policies to limit the growth of greenhouse gases.
"I think we need a 'carbon freeze,' " Gore told policy and business leaders Friday at a conference organized by a venture capital firm. "I intend to launch an ongoing campaign of mass persuasion at the beginning of 2007."
Gore said the grass-roots campaign would put heat on leaders in Washington to come up with more sophisticated policies to address global climate change.
"I think we need a mass movement in the United States. I think it ought to start at the grass roots," said Gore....Gore said the power of the freeze demand is that it can operate at every level of society -- individuals can take steps to cut their use of nonrenewable energies, and so can businesses and local and state governments. Eric Auchard, 'Carbon Freeze' Movement, Boston Globe, 12-10-06

"It's the Environment, stupid!" Just as Bill Clinton used the battle cry "It's the economy, stupid!" to keep his 1992 presidential campaign focused, political leaders worldwide are chanting a new mantra based on growing alarm about global warming. Mainstream parties in Germany, Britain, France, Canada, the United States and Austria believe tackling climate change is a vote winner while established Green parties in Germany and Austria are experiencing a renaissance....
"Climate change, if presented the right way, is a topic that voters are definitely opening up to," Manfred Guellner, managing director of Germany's Forsa polling institute, told Reuters. "We're seeing you can score points with it....In France, the need for sustainable policies has been embraced by all parties ahead of a 2007 presidential election. Socialist candidate Segolene Royal and her likely rival Nicolas Sarkozy pepper speeches with references to the environment....This month, Canada's opposition Liberals elected former environment minister Stephane Dion as their leader. Dion campaigned on green issues and said he would focus on the need to cut emissions from the booming Alberta oil area. It was the first time a major Canadian party had picked a leader who campaigned primarily on the environment. Erik Kirschbaum, Climate change catching voter attention around world, Reuters, 12-12-06

The Arctic could lose virtually all its summer sea ice by the year 2040 - 40 years earlier than previously thought - according to a study by leading climate scientists.
A rapid acceleration in the loss of sea ice seen in recent years will be dwarfed by the massive melting, up to four times faster than previously, which could take place within 20 years, the scientists predict.
If nothing is done to curb man-made emissions of greenhouse gases the Arctic Basin, from Siberia and Greenland to Canada and Alaska, could be open water in summer within the lifetime of today's children.
The findings, part of the fourth assessment of the International Panel on Climate Change (IPCC) due next year, are published today in the journal Geophysical Research Letters. Steve Connor, Arctic's Summer Sea Ice 'Could Disappear Completely by 2040', Independent/UK, 12-12-06

Streams are drying up; dams now blockade salmon journeys’ aquifers are being drained and wildlife are left homeless in drought-ravaged lands, American Indians said at a conference on climate change....Dr. Nancy Maynard of the NASA Goddard Space Flight Center, said climate change is seriously affecting the food sources and culture of the Alaskan tribes. Particularly in Alaska, Native tourism is based on the beauty of the land and wildlife. In Alaska, the Arctic subsistence cultures are hard hit by those climate changes, including changes in snow pack and seasonal runoff, which are visible in satellite imagery. “It is causing major changes in lifestyle”, especially for those whose food comes from the bear, fish and other wildlife.” However, the devastation of climate change is not just in Alaska, but is everywhere on Indian lands. From the devastation of the Menominee Forest in Wisconsin to the fire-ravaged Black Hills in South Dakota, climate changes, fires and droughts are affecting tribal cultures. Brenda Norrell Human Rights Editor U.N. OBSERVER & International Report, 12-12-06