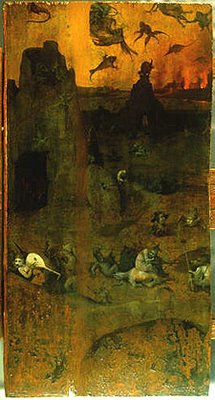 Whatever you’ve heard about New Orleans, the reality is much worse. Think of it as a vast open wound, this once-great American city that is still largely in ruins, with many of its people still writhing in agony more than a year after the catastrophic flood that followed Hurricane Katrina....
The recovery in New Orleans has gone about as well as the war in Iraq.
Bob Herbert, America’s Open Wound, New York Times, 12-21-06

The bottom line is, within two days of our decision to initiate an attack on Iran, every single one of you is going to be feeling the consequences of that in your pocketbook. And it’s only going to get worse. This is not something that only I recognize. Ask Dick Lugar what information he’s getting from big business, who are saying, “We can’t afford to go to war with Iran.”
Former UN Weapons Inspector Scott Ritter, Democracy Now, 12-21-06

Words of Power #31: Ghosts of Christmas Past (Katrina)
and Future (Iran)

Two story lines haunt me as I look forward to 2007 and back on 2006: Katrina and Iran, i.e., one catastrophe that was gamed for political advantage and corporatist gain, and another one which has not befallen us yet, but may be closer than many people assume.

To put both catastrophes -- the one that lingers un-redressed and the other that looms ominously -- in their proper context, consider two chilling remarks from Bush Women: one from W. Jong Il's mother, the other from his au pair.

Touring the Astrodome in the aftermath of Katrina, Bush's mother, the former First Lady, said: "And so many of the people in the arena here, you know, were underprivileged anyway, so this--this (she chuckles slightly) is working very well for them."(Editors & Publishers, 9-5-05)

As Zogby writes, "the condescension and arrogance at work here is stunning."

The same condescension and arrogance oozes from Barbara Bush's mouth concerning the fate of those made homeless in the destruction of New Orleans.

If the women of what Mike Malloy calls "the Bush Crime Family" have such a cynical and cavalier perspective on human suffering, imagine how shriveled and atrophied the conscience of the Manchurian Candidate himself has become?

Katrina, like 9/11, was gross incompetence and criminal negligence at best. And what was it at worst? Was it the willful exploitation of a natural disaster, i.e., ethnic cleansing in pursuit of an Electoral College edge?

And Iran? Few people in the USA know how close we are to an attack, which will likely lead to a real WW III (though some neo-con fantasists claim we are already in WWIII, or even WWW IV, ala Gingrich and Woolsey respectively). Even fewer people in the USA know that the recent election results from Iran (yes, although cruel and theocratic, Iran is a democracy, unlike Saudi Arabia) were a rebuke to Ahmadinejad and his ugly agenda.

Seizing the oil of Iraq and Iran by force of arms, and establishing hegemony over the oil and gas of Central Asia by persuasion and intrigue, is the sinister not so secret agenda that propelled the Bush-Cheney cabal to power in 2000 and has led to every subsequent woe.

The coming crisis will be contrived (ala Gulf of Tonkin) and it will be thrown at us early in the new year -- unless they are checked. Confronting these madmen, and those who have sold their souls to take over from them (e.g., McCain and Lieberman) will be very difficult for the Democratic Party as it takes control of both Houses, especially when those who want war pretend it is in Israel's best interest.

In recent years, the Party has shown a tragic lack of courage.

Perhaps this time -- with the will of the people clearly exercised in the November 2006 mid-term elections, and with much of the US military, as well as much of the federal law enforcement and intelligence communities, and yes, even a few Republicans, already standing against this insanity -- the Party leadership will defy the cabal that seized the White House in 2000 and its patrons in the US mainstream media (yes, they seem to want to go down with the ship).

Perhaps this time, the Congress will refuse to capitulate.

Remember Katrina and Iran as this Julian calendar year ends, and the new one begins. If you do not speak out against what is being perpetrated in your name, then you are complicit.

Here are two important pieces, one from Bob Herbert on New Orleans, the other a dialogue on Iran between Sy Hersh and Scott Ritter -- please read them and share them with others:

It’s eerie. The air is still. There is no noise. Night is falling....Welcome to the Lower Ninth Ward. You won’t find much holiday spirit here. In every direction, as far as it is possible to see, is devastation....Whatever you’ve heard about New Orleans, the reality is much worse. Think of it as a vast open wound, this once-great American city that is still largely in ruins, with many of its people still writhing in agony more than a year after the catastrophic flood that followed Hurricane Katrina.
Enormous stretches of the city, mile after mile after mile, have been abandoned. The former residents have doubled-up or tripled-up with relatives, or found shelter in the ubiquitous white trailers of the Federal Emergency Management Agency, or moved (in some cases permanently) to Texas, Mississippi, Georgia and beyond. Some have simply become homeless....
The recovery in New Orleans has gone about as well as the war in Iraq. Bob Herbert, America’s Open Wound, New York Times, 12-21-06

SEYMOUR HERSH: ....One last question, which is, OK, briefly, we go to war. We begin a massive bombing campaign. Take your pick. Odds are it’s going to be systematic, at least three days of intense bombing, decapitation probably, which -- that is one of the things you do when you begin a bombing attack, like we did against Saddam twice and like the Israelis did against Hezbollah when they targeted Nasrallah. And I think we and the Israelis are now 0-for-8, almost as bad as Shrummy and his elections. But anyway, so the question then is -- we go to war -- tell us what happens next, in your view.

SCOTT RITTER: Well, it’s, you know -- it’s almost impossible to be 100% correct, but I’ll give you my best analysis. The Iranians will use the weapon that is the most effective weapon, because the key for Iran -- you know, Iran can’t afford, if this -- remember, the regime wants to stay in power, so they can’t afford a strategy that gets the American people to recognize three years in that, oops, we made a mistake. I mean, if that was Saddam’s strategy, it failed for him, because he’s out of power. Yeah, we realize we made a mistake now in Iraq, but the regime is gone. So the Iranians realize that they have to inflict pain upfront. The pain is not going to be inflicted militarily, because we're not going to commit numbers of ground forces on the ground that can cause that pain. The pain will come economically.
Our oil-based economy is operating on the margins, as we speak. We only have 1.0% to 1.5% excess production capacity. If you take the Iranian oil off the market, which is the first thing the Iranians will do, we automatically drop to around minus-4%, which means there ain’t enough oil out there to support the globe’s thirst for oil, especially America’s thirst for oil. And we're not the only ones drinking it? You think for a second the Chinese and the Indians, the world’s two largest developing economies, are going to say, “Hey, Uncle Sam, we’ll put everything on hold, so we can divert oil resources, so you can feed your oil addiction, because you attacked Iran”?
And it’s not just Iranian oil that will go off the market. Why do you think we sent minesweepers up there? We’ve got to keep the Straits of Hormuz open. The Iranians will shut it down that quick. They’ll also shut down oil production in the western oil fields of Saudi Arabia. They’ll shut down Kuwaiti oil production. They’ll shut down oil production in the United Arab Emirates. They’ll shut down whatever remaining oil production there is in Iraq. They’ll launch a massive attack using their Shia proxies in Iraq against American forces. That will cause bloodshed.
The bottom line is, within two days of our decision to initiate an attack on Iran, every single one of you is going to be feeling the consequences of that in your pocketbook. And it’s only going to get worse. This is not something that only I recognize. Ask Dick Lugar what information he’s getting from big business, who are saying, “We can’t afford to go to war with Iran.” Former UN Weapons Inspector Scott Ritter and Investigative Journalist Seymour Hersh on White House Plans for Regime Change, Democracy Now, 12-21-06