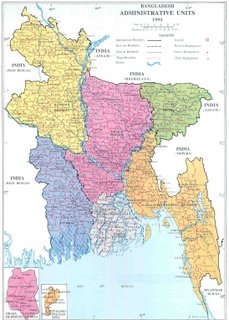 ...in today's world we are all responsible for each other's security. Against such threats as nuclear proliferation, climate change, global pandemics or terrorists operating from safe havens in failed states, no nation can make itself secure by seeking supremacy over all others. Only by working to make each other secure can we hope to achieve lasting security for ourselves. This responsibility includes our shared responsibility to protect people from genocide, war crimes, ethnic cleansing and crimes against humanity. That was accepted by all nations at last year's U.N. summit. But when we look at the murder, rape and starvation still being inflicted on the people of Darfur, we realize that such doctrines remain pure rhetoric unless those with the power to intervene effectively -- by exerting political, economic or, in the last resort, military muscle -- are prepared to take the lead. It also includes a responsibility to future generations to preserve resources that belong to them as well as to us. Every day that we do nothing, or too little, to prevent climate change imposes higher costs on our children. Kofi Annan, What I've Learned, Washington Post, 12-11-06

Toward this end, Words of Power focuses not only on traditional security issues such as counter-terrorism, cyber security and business continuity, but also on issues such as the health of democratic institutions and the security implications of global warming.

The urgent need for a 21st Century security model is also why I suggest security and intelligence professionals should champion the UN Millennium Goals and other international initiatives -- both in their personal lives and as government and business policy.

Shocked into action by a terrible famine while teaching in Bangladesh in 1976, the US-educated Yunus abandoned his textbooks and went into a village near his university to see how he could help.
What he found were resourceful and hard-working villagers victimized by usurious money lenders and trapped into lives of endless drudgery, modern-day serfs held captive by destitution. He was astounded to discover how little was needed for them to break out of this vicious cycle: a measly 27 dollars for 42 people.
When Yunus could not find a bank with enough imagination to launch a lending program for people so poor that they had nothing to offer as collateral, he reached into his pocket and lent the money himself.
Every penny was returned. Indeed, the audited repayment rate over the course of Grameen Bank's history has been 98 percent.
There are, Yunus often points out, more than a billion people in the world living on less than a dollar a day, and many of them, he says, could change their lives and their prospects with a little bit of seed capital.
Yunus' concept of tiny, collateral-free loans has already caught on all over the world. Grameen Bank itself is present in dozens of countries, and has been copied by hundreds of other micro-credit lending institutions.... Bill Schiller, Nobel Peace Laureate Dares to Imagine a World without Poverty, Agence France Press, 12-10-06

In his Nobel Peace Prize acceptance speech, Yunus talks of the fight against poverty and its importance in eradicating the root causes of terrorism:

This year's prize gives the highest honor and dignity to the hundreds of millions of women all around the world who struggle every day to make a living and bring hope for a better life for their children. This is a historic moment for them."
I believe terrorism cannot be won over by military action. ... We must address the root causes of terrorism to end it for all time. I believe putting resources into improving the lives of poor people is a better strategy than spending it on guns.
Peace should be understood in a human way, in a broad social, political and economic way. Peace is threatened by unjust economic, social and political order, absence of democracy, environmental degradation and absence of human rights.
I became involved in the poverty issue not as a policy maker or a researcher. I became involved because poverty was all around me, and I could not turn away from it....
We are creating an entirely new generation that will be equipped to take their families way out of the reach of poverty. We want to make a break with the historical continuation of poverty....
Grameen has given me an unshakable faith in the creativity of human beings. This has led me to believe that human beings are not born to suffer the misery of hunger and poverty. Excerpts from Bangladeshi economist Muhammad Yunus' Nobel Prize speech, International Herald Tribune, 12-10-06