Don't Forget Darfur, Tibet or Burma This Summer, Don't Forget Men & Women of US Military Either; Reflections On Speaker Pelosi's Visit to Dharmsala 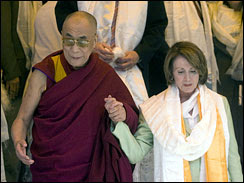 Do Not Forget Darfur, Tibet or Burma This Summer, Do Not Forget the Men & Women of the US Military Either; Reflections On Speaker Pelosi's Visit to Dharmsala

Both of these leaders have been second-guessed a lot: Pelosi, since taking the gavel in January 2007, both for her declaration that impeachment was “off the table” and for not cutting off funding for the foolish military adventure in Iraq; the Dalai Lama, in recent years, both for how he has led the Tibetan government in exile and for his approach to dealing with Beijing and Beltwayistan.

I disagree with both of them on numerous decisions. But I do not second-guess them on any of it.

This is a bad time in the world.

(Look at the weird and destructive turn the race for the Democratic presidential nomination has taken. Instead of a tremendous competition between two worthy survivors debating the great issues of our time, we are being subjected to a blood-match fought over innuendoes, distortions, distractions and irrelevancies.)

It is a very dangerous period. It could well be that the end of the current regime in Beltwayistan is its worst moment.

There are no good choices. It is difficult to see very far ahead.

There is very little margin for error.

If history shows Pelosi and the Dalai Lama to have erred in their respective trials, and if it is honest (a big if), history will also show them to have erred on the side of caution. Whether that caution was indeed the better part of valor remains to be determined.

If, at the end of this struggle, Tibet is allowed to heal itself, and restore its culture, in some form of autonomy if not outright independence; then those who second-guess the Dalai Lama now may have cause to regret their arrogance.

If, in 2008, a Democratic who is truly opposed to the neo-con wet dream is sworn in as President of the USA (a much bigger if than it should be), and that President -- working with an emboldened Congress -- takes a new course both with regard to Iraq and Iran, thereby thwarting a wider regional war in the Middle East; then those who vilify the Speaker now may come to regret their heated rhetoric.

Meanwhile, we must do what we can to articulate the truth and all the ways it must be served.

Do not forget the men and women of the US military. Do not be deceived. They deserve so much better from their civilian leaders. They are being held hostage. Blood and oil have turned the desert sand into a quagmire.

Do not forget the women and children of Darfur. The great nations are allowing a genocide to take place there.

Here are three important items, one each on Tibet, Darfur and Iraq:

A group of prominent Chinese intellectuals has circulated a petition urging the government to stop what it has called a “one-sided” propaganda campaign and initiate direct dialogue with the Dalai Lama.
The petition, which was signed by more than two dozen writers, journalists and scholars contains 12 recommendations which, taken together, represent a sharp break from the Chinese government’s response to the wave of demonstration that have swept Tibetan areas of the country in recent days.
They come, moreover, at a time when the government is working hard to convey a sense of strong international support for putting down what is being depicted here as a civil disturbance by lawless people being instigated by the Tibet’s spiritual leader, the Dalai Lama, who Beijing denounces as a secessionist, or “splittist.” New York Times, 3/23/08

In preparing to host the 2008 Summer Olympics, China has engaged in a massive campaign to dissemble its role in the Darfur genocide in western Sudan, now entering its sixth year ...
Why does China airbrush away Darfur's genocidal realities? Why has Beijing been Khartoum's largest weapons supplier over the past decade? Why has China repeatedly wielded a veto threat at the UN Security Council as the world body vainly struggles to bring pressure to bear on Khartoum? The answer lies in China's thirst for Sudanese crude oil. ...
Confident that China will block punitive actions, Khartoum recently resumed savage civilian clearances in West Darfur ... If China is to be a legitimate host of the 2008 Olympics, the preeminent event in international sports, it cannot be complicit in the ultimate international crime - genocide. The world community must respond more forcefully to this intolerable contradiction. Eric Reeves, Boston Globe, 3-22-08

The invasion of Iraq in 2003 was a tragedy - for Iraq, for the US, for the UN, for truth and human dignity. I can only see one gain: the end of Saddam Hussein, a murderous tyrant. Had the war not finished him he would, in all likelihood, have become another Gadafy or Castro; an oppressor of his own people but no longer a threat to the world. Iraq was on its knees after a decade of sanctions.
The elimination of weapons of mass destruction was the declared main aim of the war. It is improbable that the governments of the alliance could have sold the war to their parliaments on any other grounds. ... They could not succeed in eliminating WMDs because they did not exist. Nor could they succeed in the declared aim to eliminate al-Qaida operators, because they were not in Iraq. They came later, attracted by the occupants. ... Increased safety for Israel might have been an undeclared US aim. If so, it is hard to see that anything was gained by a war which has strengthened Iran. ... Hans Blix, Guardian, 3-20-08