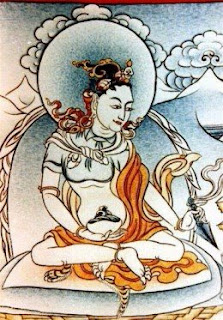 At least 80 people have been killed in unrest following protests by Tibetans against Chinese rule, the Tibetan government in exile says. ...
Hong Kong Cable TV reported that about 200 military vehicles, each carrying 40 to 60 armed soldiers, had driven into the city.
Loudspeakers broadcast messages, such as: "Discern between enemies and friends, maintain order." ... The demonstrators, who on Friday set fire to Chinese-owed shops and hurled rocks at local police, have been penned into an area of the old town by government forces.
The authorities in Tibet have urged the protesters to hand themselves in by midnight on Monday, promising leniency to those who surrender. BBC, 3-16-08

Excerpts from the Dalai Lama remarks to the news media:

"Please investigate.... if possible some respected organization, international organization carry entirely what is the condition, what is the situation in Tibet."
"Whether Chinese government admits or not, there is a problem. The problem is the nation with ancient cultural heritage is actually facing serious dangers.... Whether as a Tibetan nation, ancient nation with ancient cultural heritage is actually dying".
"And then also, whether intentionally or unintentionally, somewhere cultural genocide is taking place". ...
"Generally, Tibetans are following, I think quite sincerely, non-violent principles. Of course individual human beings, when emotions come out of control, then certain sort of violent actions are possible. But my principle, everybody knows is completely committed to non-violence". Reuters, 3-16-08