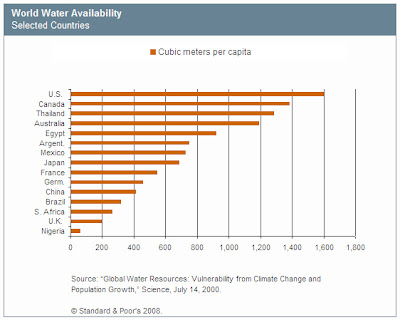 A scientist who developed a way to calculate how much water is used in the production of anything from a cup of coffee to a hamburger was awarded the 2008 Stockholm Water Prize ... Professor John Anthony Allan of the University of London ... won the award for introducing the concept of "virtual water," a calculation method that has changed the nature of trade policy and research. ... "For a single hamburger, an estimated 2,400 liters of water are needed. In the USA, the average person consumes nearly 7,000 liters of virtual water every day." It said that was more than three times the average consumption of a Chinese person. Reuters, 3-19-08

Our very survival is utterly dependent upon fresh water. But global warming and over-population threaten to leave us without enough to sustain life. It is imperative that we come to grips with the vital issues of water conversation and sanitation at all levels -- local, regional, national and global.

The children and their teachers know this.

In the Netherlands, thousands of children from 10 to 12 years old are walking 6 km with 6 liters of water, to experience what children in developing countries must do every day; along the way, they collect donations for water and sanitation projects in Africa and Asia.

In Visakhapatnam, India, children will gather and take this pledge: "I pledge to save water. I will never waste water. I will not contaminate drinking water. I will not pollute our precious water resources. I won't hesitate to tell my neighbors and others the sad state of our water in our holy rivers, lakes, tanks, wells, adn streams, and request them not to pollute them. I pledge to conserve every drop of water that I can every day of the week. ...

In Jakarta, Indonesia, one of the poorest areas of Jakarta, Indonesia, children trained by Clowns without Borders will perform circus acts with messages about water conservation and sanitation in a celebration of their new YEWP-built community rainwater tank.

In Monterrey, Mexico, children will participate in a contest of drawing, singing, acting, making histories and campaigns related to sanitation.

But of course the problem is not children or teachers.

By 2025, fully a third of the planet's growing population could find itself scavenging for safe drinking water, the United Nations has warned ahead of World Water Day on Saturday.
More than two million people in developing countries -- the vast majority children -- die every year from diseases associated with unsanitary water.
There are a number of interlocking causes for this scourge.
Global economic growth, population pressures and the rise of mega-cities have all driven water use to record levels. Agence France Press, 3-21-08

Only a tiny fraction of the world's water – about 2.5 percent – is drinkable. That still would be an ample supply if it were clean and available where needed.
It's not. Today some 1.2 billion people lack access to safe drinking water and 2.6 billion lack proper sanitation (adequate sewage disposal). ...
It's clear that competition for water "will intensify in the decades ahead," said Kemal Dervis, administrator of the United Nations Development Program in its 2006 report. "Water is the ultimate fugitive resource, traversing borders through rivers, lakes, and aquifers – a fact that points to the potential for cross-border tensions in water-stressed regions." ... Christian Science Monitor, 3-20-08

Nor is water simply an African or Asian problem.

A U.N. study released on the eve of World Water Day Mar. 22 says the lack of safe drinking water is not confined to the world’s poorer nations; it also threatens over 100 million Europeans.
The result: nearly 40 children in Europe, mostly in Eastern Europe, die every day due to a water-related disease: diarrhoea.
In Eastern Europe, about 16 percent of the population still does not have access to drinking water in their homes, while in rural areas, over half of all people suffer from the lack of safe water and adequate sanitation. Inter Press Service, 3-20-08

Overall, the amount of rain falling in the U.S. is more than adequate, especially compared with the rest of the world. However, fresh water supplies aren't evenly distributed. Lack of water has been and remains a severe problem in the Southwest. ... Today's troubles are less the result of the swing in rainfall than of rising populations. Especially in the U.S. Southwest, the growing population base in a year of low rainfall has caused substantial problems. In the Southeast, the second-lowest rainfall total on record has collided with increasing populations to create a major drought. ... Business Week, 2-20-08

Today, it may be someone else far away who thirsts; tomorrow, with little warning, it could be you and your loved ones.

Each of us must understand how we can better conserve water in our own lives and at the same time act in some way to help those who are already in dire straights.