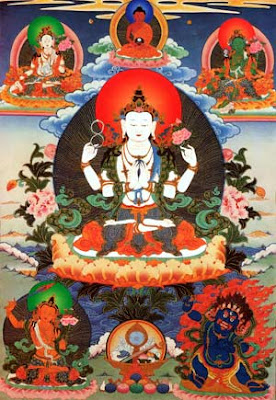 Breaking news from the Canadian press and insightful commentary from the German press -- on a crisis of profound spiritual and cultural importance:

Tibet borders sealed in advance of surrender deadline
China has effectively closed Tibet to foreigners as it prepares to deal with protesters in the aftermath of last week's riots in Lhasa.
Qiangba Puncog, governor of the Tibet Autonomous Region, told reporters in Beijing on Monday that "because of the arson and murders which have taken place in Tibet, we do not advise foreign news organizations or foreign nationals to go to Tibet for safety reasons."
His moderate words couched the reality that no foreigners are allowed into the region without specific permission from Beijing. Aileen McCabe, Canwest News Asia Corespondent, 3-17-08

In reality, the Chinese government isn't at all interested in an amicable solution to the conflict. Instead, Beijing is using the Chinese populace as its most potent weapon, in the form of a resettlement policy that has seen tens of thousands of ethnic Chinese relocated to Tibet in recent years -- and the resulting assimilation of the region. ... The Dalai Lama, for his part, has unfortunately been unable to find an adequate political strategy to counter Beijing's cultural imperialism. As a monk living in exile who is dedicated to non-violence, his options are limited. But despite his reputation as the jet-setting pop-star of contemplation and reflection, he has not found a political approach to guide his people into the future. ... The problem, though, is that China has to understand that in a globalized world, there is no such thing as problems that are purely "domestic." It makes no sense for Beijing to clutch to a concept of sovereignty straight out of the 19th century. Lhasa long ago became China's Gaza Strip. The Dalai Lama no longer has complete authority on Tibetan streets and in Tibetan monasteries. It is the Tibetan Youth Congress that sets the tone these days. This is a radical group of exile Tibetans that has withheld support for the Dalai Lama for years. They say that his peaceful path has failed to secure freedom for their homeland and that Tibetans must follow the path of other liberation movements, like the Palestinians or the East Timorese. ... China had been simply waiting until the Dalai Lama dies before they dealt with the Tibet problem -- the Tibet Youth Congress dooms that approach to failure. ... Beijing has the means to mitigate the damage in its hands. In order to prevent leaving the Beijing 2008 Olympics with an aftertaste comparable to that of Berlin in 1936, Chinese Communist Party chief Hu Jintao will have to do something he is not used to doing. Rather than showing brute force, he must pursue de-escalation in Tibet. Rather than short-sighted propaganda, he must engage in true dialogue. The argument that sports have nothing to do with politics will hardly suffice. Jürgen Kremb, Tibet -- China's Gaza Strip, Der Spiegel, 3-17-08