Image: Darfur from Above, December 2006 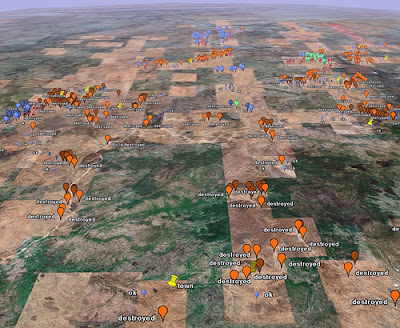 The United Nations refugee agency UNHCR said on Tuesday that up to 400 people are estimated to have been killed in Chad during cross-border attacks by Sudanese Janjaweed militia some 10 days ago. Reuters, 4-10-07

At the current rate, if the situation in Sudan's Darfur region continues, over half the population in the region could be displaced within the next 18 months, John Holmes, the Under-Secretary-General for the United Nation's Office for the Coordination of Humanitarian Affairs (OCHA) has warned. IRIN, 4-10-07

In the region of Darfur, the circumference of the slaughter widens.

In the USA, the dehumanizing of the sheeple continues.

You can now click on real-time evidence of crimes against humanity on the WWW:

In an unusual partnership, Google Earth - with 200 million users - has joined with the U.S. Holocaust Memorial Museum to focus its high-tech lens and high-powered search on the atrocities in Darfur. . . . The mapping and data initiative uses the latest high-resolution satellite imagery, 3-D technology, photos on the ground and witness accounts and other data compiled by the Holocaust Museum in Washington, which has an extensive research branch.
"People can now locate and visualize with great specificity what is happening in Darfur," said Sara Bloomfield, director of the museum. Unlike the Holocaust in Nazi Germany, "there is plenty of visual proof about Darfur, and that can build understanding, empathy and the ability to act." Frank Davies, San Jose Mercury News, 4-11-07

I suggest you send some satellite images of the devastation to the US mainstream news media, and demand that they stop providing air time to this demented individual:

Ann Coulter: "These people can't even wrap up genocide. We've been hearing about this slaughter in Darfur forever - and they still haven't finished. The aggressors are moving like termites across that country. It's like genocide by committee. Who's running this holocaust in Darfur, FEMA?
This is truly a war in which we have absolutely no interest." Crooks and Liars, 4-6-07

To find Crisis in Darfur on Google Earth, users must download the Google Earth application at no cost from http://earth.google.com. Once downloaded, users will find Crisis in Darfur by flying over Africa. Information on the Museum's Genocide Prevention Mapping Initiative and the Holocaust mapping layer can be accessed from the Museum's Web site at www.ushmm.org/googleearth. UNITED STATES HOLOCAUST MEMORIAL MUSEUM AND GOOGLE JOIN IN ONLINE DARFUR MAPPING INITIATIVE