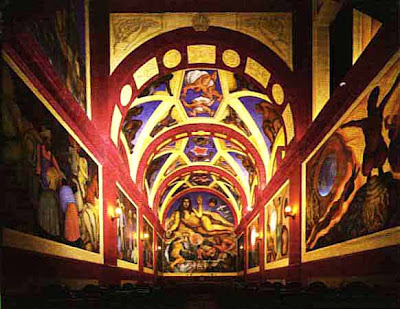 Writing in the report, Gen Zinni, a former commander of US Central Command, says: "It's not hard to make the connection between climate change and instability, or climate change and terrorism."
He adds: "We will pay for this one way or another. We will pay to reduce greenhouse gas emissions today, and we'll have to take an economic hit of some kind.
"Or we will pay the price later in military terms. And that will involve human lives. There will be a human toll." BBC, 4-15-07

Hard Rain Journal 4-15-07 -- Climate Crisis Update: Eleven Retired Admirals and Generals, including Anthony Zinni, speak out on Global Warming -- "The chaos that results can be an incubator of civil strife, genocide and the growth of terrorism.”

Vengeance is sweet, but so is vindication.

And although vengeance for seven years of disinformation and wasted opportunity vis-à-vis the planetary climate crisis may still be some time away, vindication has arrived, and yes, it is delicious.

In my 4-10-07 Climate Crisis Update, I noted that Sens. Chuck Hagel (R-NE) and Dick Durbin (D-IL) have called for a National Intelligence Estimate (NIE) on global warming.

And now, another drop of sweet nectar comes, this one from the CNA Corporation and an advisory board of retired generals and admirals.

They have delivered a report entitled “National Security and the Threat of Climate Change”, which underscores what some of us in the world of risk, security and intelligence have been saying for years: global warming is a national security issue and must become a priority for the US federal government.

The effects of global warming, the study said, could lead to large-scale migrations, increased border tensions, the spread of disease and conflicts over food and water. All could lead to direct involvement by the United States military.
The report recommends that climate change be integrated into the nation’s security strategies and says the United States “should commit to a stronger national and international role to help stabilize climate changes at levels that will avoid significant disruption to global security and stability.” New York Times, 4-15-07

The evolution of my understanding has taken several important turns over the years:

The first turn was early in the 1990s, when I realized that cyber crime was much more than juvenile hackers.

The next turn was in the late 1990s when I realized that cyber security, physical security and personnel security had to be dealt with in an integrated, holistic way; and, furthermore, that globalization and the WWW were going to transform the nature of economic espionage and other information crimes.

The third turn was in 2001, when I realized that those who had high-jacked the US federal government were both unwilling to and incapable of waging a real war on Middle Eastern terrorism (i.e., attacking root causes as well as symptoms).

The final turn was in 2002, when in the course of analyzing risks and threats, and developing crisis management capabilities for a global entity of over one hundred thousand people in over one hundred countries, I realized that global warming was not only the greatest environmental problem we faced, but also one of the two greatest national security threats (the other, of course, being nuclear proliferation, which almost nothing meaningful has been done about for the last seven years).

Each of these turns made me make course adjustment in what I was focusing on, who I could associate myself with and what I was recommending, but for the last few years, it has felt like I was screaming into a sand storm; now finally, there is an echo, not just of my voice but of other's as well.

Former US military leaders have called on the Bush administration to make major cuts in greenhouse gas emissions.
In a report, they say global warming poses a serious threat to national security, as the US could be drawn into wars over water and other conflicts . . .
It warns that over the next 30 to 40 years, there will be conflicts over water resources, as well as increased instability resulting from rising sea levels and global warming-related refugees.
"The chaos that results can be an incubator of civil strife, genocide and the growth of terrorism," the 35-page report predicts.
The report was issued by a Virginia-based national security think-tank, The CNA Corporation, and was written by six retired admirals and five retired generals. BBC, 4-15-07

The truth is dawning; and it is not too late to act on it. There is much to debate -- e.g., what role nuclear power should play (if any), and whether or not blind growth and ceaseless development should be the primary standards for the ecconomic health and security of nations.