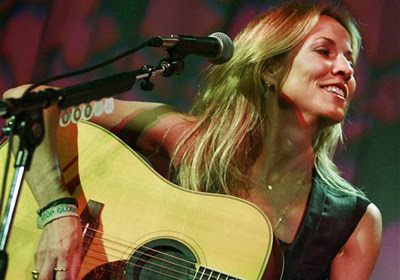 "I feel this is the most important Earth Day that will take place in our lives," Crow said last week from the University of Alabama at Birmingham. "This is a real turning point."  The nine-time Grammy Award-winning artist met Laurie David in November at a birthday party David threw for a mutual friend. Hitting it off, the two followed up with a lunch, at which they hatched the idea of the college tour.   ... "It's interesting -- nine months ago, even six months ago, you weren't seeing even a small percentage of what's being written on the environment like you are now. It's front-page stuff, and magazines have devoted whole issues to it -- from Elle to Vanity Fair [both current issues, with Laurie David having guest-edited Elle], Newsweek and Time, even Sports Illustrated had an issue on it. It's everywhere, and I feel it's our responsibility to educate ourselves and become part of the movement because we live on a living organism. We depend on the Earth's health, and it's becoming sick, and it's going to affect how we live our lives."   Washington Post, 4-20-07

Sheryl Crow and Laurie David are winding up a consciousness-raising bio-deisel bus tour of college campuses throughout Southeastern USA, in Washington, D.C. today. They got themselves introduced to Karl Rove at the annual White House Correspondents dinner last night, and then they did some powerful juju on him:

We asked Mr. Rove if he would consider taking a fresh look at the science of global warming. Much to our dismay, he immediately got combative. And it went downhill from there.
We reminded the senior White House advisor that the US leads the world in global warming pollution and we are doing the least about it. Anger flaring, Mr. Rove immediately regurgitated the official Administration position on global warming which is that the US spends more on researching the causes than any other country.
We felt compelled to remind him that the research is done and the results are in (www.IPCC.ch). Mr. Rove exploded with even more venom. Like a spoiled child throwing a tantrum, Mr. Rove launched into a series of illogical arguments regarding China not doing enough thus neither should we. (Since when do we follow China's lead?) ...
In his attempt to dismiss us, Mr. Rove turned to head toward his table, but as soon as he did so, Sheryl reached out to touch his arm. Karl swung around and spat, "Don't touch me." How hardened and removed from reality must a person be to refuse to be touched by Sheryl Crow? Unphased, Sheryl abruptly responded, "You can't speak to us like that, you work for us." Karl then quipped, "I don't work for you, I work for the American people." To which Sheryl promptly reminded him, "We are the American people." Huffington Post, 4-22-07

Meanwhile, one of the Bush-Cheney cabal's capos, Aussie PM John Howard was confronted by another caring, beautiful woman, i.e., Mother Nature Herself:

“Australia has warned that it will have to switch off the water supply to the continent’s food bowl unless heavy rains break an epic drought - heralding what could be the first climate change-driven disaster to strike a developed nation.”
The Prime Minister, John Howard, a hardened climate-change sceptic, delivered dire tidings to the nation’s farmers yesterday. Unless there is significant rainfall in the next six to eight weeks, irrigation will be banned in the principal agricultural area. Crops such as rice, cotton and wine grapes will fail, citrus, olive and almond trees will die, along with livestock.
A ban on irrigation, which would remain in place until May next year, spells possible ruin for thousands of farmers, already debt-laden and in despair after six straight years of drought.
Australia is the only major industrialized country other than the U.S. to reject the Kyoto Protocol. Think Progress, 4-22-07

Politically and spiritually, this Earth Day may be a turning point.