Hard Rain Journal 4-6-07: US Mainstream Media Smears Pelosi for Her Peace Mission, While the Bush-Cheney Regime Collaborates with Al Qaeda and Taliban 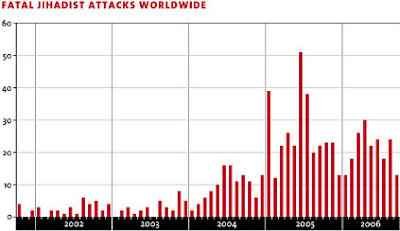 Hard Rain Journal 4-6-07: US Mainstream News Media Smears Pelosi for Her Peace Mission, While the Bush-Cheney Regime Collaborates with Elements of Al Qaeda and Taliban

Talking to the Syrians (and the Iranians) is not only one of the recommendations of James Baker's Iraq Study Group; according to a World Opinion poll taken in December 2006, it is a notion supported by 75% of the people of the USA.

But the Bush-Cheney regime isn't really looking for solutions, is it?

Here is some context and continuity that the US mainstream news media won't provide you concerning the so-called "war on terror":

Despite the warnings from Clinton-Gore national security team, the Bush-Cheney regime looked the other way and did nothing to thwart the 9/11 attacks. Then, instead of focusing on Afghanistan, Bush-Cheney lied the country into the invasion and occupation of Iraq (a sworn enemy of those that attacked the USA on 9/11).

Now, instead of extracting the US military from that strategic blunder, they seek to compound it with an attack on Iran (another sworn enemy of those that attacked the USA on 9/11).

Meanwhile, the remains of the innocents slaughtered on 9/11 have been used to fill potholes, (Reuters, 3-24-07), the uniform and personal affects of US Army ranger Pat Tillman have been burned, (BBC, 5-5-05), and Osama Bin Laden, Ayman al-Zawahiri and Mullah Omar are all still alive and at large.

But even worse, in recent weeks, there have been revelations concerning covert Bush-Cheney regime collaboration with elements of Al Qaeda and the Taliban:

They dipped into "black pools of money," possibly stolen from the billions of Iraqi oil dollars that have never been accounted for since the American occupation began. Some of these funds, as well as Saudi ones, were evidently funneled through the embattled, Sunni-dominated Lebanese government of Prime Minister Fouad Siniora to the sort of Sunni jihadi groups ("some sympathetic to al-Qaeda") whose members might normally fear ending up in Guantanamo and to a group, or groups, associated with the fundamentalist Muslim Brotherhood. (Tom Dispatch, 3-13-07)

A Pakistani tribal militant group responsible for a series of deadly guerrilla raids inside Iran has been secretly encouraged and advised by American officials since 2005, U.S. and Pakistani intelligence sources tell ABC News. The group, called Jundullah, is made up of members of the Baluchi tribe and operates out of the Baluchistan province in Pakistan, just across the border from Iran. . . . The leader, Regi, claims to have personally executed some of the Iranians. "He used to fight with the Taliban. He's part drug smuggler, part Taliban, part Sunni activist," said Alexis Debat, a senior fellow on counterterrorism at the Nixon Center and an ABC News consultant who recently met with Pakistani officials and tribal members. (ABC News, 4-3-07)

In recent years, the Bush-Cheney regime has blown off a secret Iranian offer to negotiate a regional peace and squashed a secret Israeli effort to negotiate an agreement with the Syrians.

Bush-Cheney does not want peace or stability. It does not even want vengence. It wants empire, and it is willing to wage perennial war for it. Bush-Cheney is not running a "war on terror," it is running a war IN, OF, BY and FOR terror.

Indeed they have sided with those who attacked us on 9/11 against those who would have helped us destroy them.

When will the US mainstream news media back away from this treasonous cabal?

The corporatist stranglehold on the US government is in the media moguls' best interests, or so they think.

And Speaker Pelosi, who is third in the line of constitutional succession, is dangerous to them. She symbolizes the restoration of the Republic.