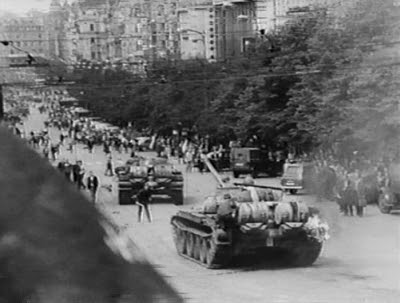 On the night of the Millennium celebration, throngs of people throughout the world glimpsed a planetary vision of green and open societies, networked for collective peace and prosperity.

But over the past seven years, we have been driven away from that great vision, and drawn down into a maelstrom of fear, forged from the interaction of delusional geopolitics (e.g., PNAC), religious extremism, predatory corporatism and other toxic substances.

The world is growing very dangerous.

Unless the White House is liberated from the Cult-formerly-known-as-the-Republican-Party and the narrow corporatist interests it serves, the elation and the promise brought by Democratic victories in the 2006 mid-term elections may be short-lived.

If events turn against us here in the USA, this period could an as abrubtly and as violently as the Prague spring.

And if that happens, then we will all be looking into the abyss.

The nightmare beyond Bush is a global lapse of conscience and sanity.

The warning signs are everywhere.

Pakistan has nuclear weapons. It also has at least 13,000 madrassas (unofficial estimates say perhaps as many as 25,000 or more), with at least 1.5 million students enrolled. These "seminaries" have so far resisted the Musharraf regime's alleged attempts to regulate and reform them.

Yes, with their shared fantasy of "holy war," Bush and Bin Laden have filled them to overflowing.

Currently, Asia Times reports, a gruesome video of a 12-year-old boy slashing a man's throat is circulating in the country: "the fanatical intensity with which the child - egged on by a group of adults chanting 'Allah hu akbar' - demonstrates the tremendous dangers of the kind of psychological indoctrination to which Pakistan's children are being subjected. (Asia Times, 4-25-07)

Meanwhile, Der Speigel reports that a monstrous dam being built on the Indus river will soon submerge 35,000 petroglyphs, i.e., "stone messages and images from Buddhist times, whose loss is fully comparable to that of the famous Buddhas of Bomyan, which were demolished with explosives by the Taliban." (Der Speigel, 4-26-07)

Farther east, Kim Jong-Il and the Burmese military junta have struck up a dangerous strategic alliance: "North Korea, which has a large domestic arms industry and a willingness to accept barter trade for weapons, was a good alternative source. ... There have also been frequent unexplained visits by North Korean freighters to [Burma] ports in recent years, which have been shrouded in secrecy and tight security. ... North Korea is world-renowned for its expertise in building underground military installations and it appears to be passing these capabilities to the [Burmese junta]. ... There has also been diplomatic speculation that North Korea is involved in the building of a nuclear test reactor in central [Burma]. (Asia Times, 4-28-07)

In Eastern Europe and Central Asia, according to UN statistics, millions of people are "surviving on less than 2 US dollars a day despite healthy economic growth in the region ... Half of the populations of five countries: Uzbekistan, Armenia, Georgia, Kyrgyzstan and Tajikistan were caught below the 2-dollar line ... Every year around 212,000 children died before their fifth birthday in Eastern Europe, the Caucasus and Central Asia. (Deutsche Presse-Agentur, 4-27-07)

In Africa, World Health Organization research reports, "25 countries are expected to experience water scarcity or water stress in the next 20 to 30 years. This translates into 16 percent or 230 million of Africa's population facing water scarcity by 2025, and 32 percent or 460 million people living in water-stressed countries by that time. ... Signs of climate change can be seen in decreasing rainfall and severe droughts in Africa, environmentalists warned at the conference. River levels are dropping. In extreme cases, rivers are drying up."(Inter Press Service, 4-26-07)

Half the world away, indigenous leader Julio Cusirichi Palacios, winner of the Goldman Environmental Prize, struggles to protect 15 or so uncontacted tribes in the Peruvian Amazon that live in the most remote regions of the rainforest. Survival International reports that Palacios is currently involved in a legal struggle against the US government and three US timber importers in an attempt to halt illegal logging in a reserve set aside for the uncontacted tribes: "Highly vulnerable to any form of contact because of lack of immunity to outsiders’ diseases, their territories are under huge threat from oil exploration and illegal mahogany logging. 90% of the mahogany is exported to the USA." (Survival International, 4-26-07)

Meanwhile, in the USA, the middle class is being crushed from above; and in turn, those democratic institutions that depend on a healthy middle class are being debased and subverted.

Naomi Wolf draws on examples from the history of Germany, Spain and Chile; and citing their corollaries in the contemporary USA, Wolf articulates the path to Fascist America, in 10 Easy Steps:

And as Wolf remarks, we are already well down the road:

As difficult as this is to contemplate, it is clear, if you are willing to look, that each of these 10 steps has already been initiated today in the United States by the Bush administration. ... It is my argument that, beneath our very noses, George Bush and his administration are using time-tested tactics to close down an open society. It is time for us to be willing to think the unthinkable ... (Guardian, 4-24-07)

Within this context, consider these recent utterances -- all made within a 72-hour period -- by the three front-runners for the 2008 Republican presidential nomination:

Giuliani on 9/11: In a stunning politicization of national security, Rudy Giuliani said today that “if a Democrat is elected president in 2008, America will be at risk for another terrorist attack on the scale of Sept. 11, 2001. But if a Republican is elected, he said, especially if it is him, terrorist attacks can be anticipated and stopped.” (Think Progress, 4-14-07)

Mitt Romney on Osama Bin Laden: "It's not worth moving heaven and earth spending billions of dollars just trying to catch one person." (TPM Cafe, 4-26-07)

What's most disturbing about these three ugly statements?

That they were said at all?

That they were said within a 72 hour period?

That none of the three would-be leaders of the free world distanced themselves from their statements or qualified them in any way after the fact?

Although all of these elements are indeed disturbing, what is most disturbing is that Giuliani, McCain and Romney are just auditioning to be strong man, and that the thinking is whoever presents himself as the most convincing strong man will be installed as the new maximum leader in 2008.

What could so drastically alter the current political landscape of the USA between now and 2008 as to place any of these people in the Oval Office?

Let's lay aside the issue of election security itself for the sake of argument -- yes, it is still unresolved, and yes the system is still rife with dangerous vulnerabilities -- because even without the theft of an election, all that would be required to ensure a President McCain, a President Guiliani or a President Romney would be the convergence of two plausible occurrences with a third force, which we can count on as a constant:

A terrorist attack with catastrophic impact in the USA, Israel or Europe, i.e., a second 9/11 (or in PNAC parlance, a third Pearl Harbor);

And, of course, the complicity of the corporatist news media, which is determined to thwart media reform and any other potential threat to the interlocking monopolies that dominate the air waves.