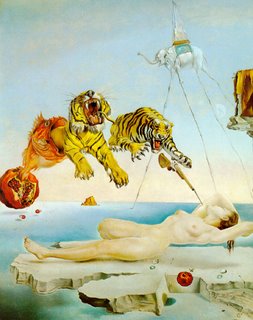 Image: Salvador Dali's One Second Before Awakening from a Dream Caused by the Flight of a Bee Around a Pomegranate

What if the evening news brought you vital information and provocative perspectives from around the world? What if it approached the challenges and crises of the 21st Century with a global vision and a humane attitude? What if the evening news told you what was really going on? What if its purpose was to wake you up instead of sedate and distract you? What if you were given a nightly update (or even a weekly update) on where the USA really stood in the world -- economically, militarily, scientifically, technologically, environmentally, culturally, spiritually? What if ... Ah, but what would the profit motive be? Whose quarterly projections would it benefit? Whose business interests would it serve? We have no sense of what Tom Hartmann talks about as "the commons." There is no belief in a public good beyond that of business interests. In the USA, corporations are bestowed the rights of uber-individuals. Furthermore, the money of corporations is sanctified as free speech, and since the US mainstream news media is controlled by a handful of corporations, these uber-individuals control the vertical and the horizontal. It is madness. But what if ...

Here is some news and analysis concerning every region of the world, including cyberspace, that you probably haven't heard from Jim Lehrer, Brian Williams or Katie Couric:

The geopolitics and global economy of the 21st Century is already radically different from that of the 20th Century. The world is moving on. Unfortunately, the USA, yoked to deranged neo-con thinking in the executive branch, and craven pandering to big business in the legislative branch, is chasing its own tail.

The Shangai Cooperation Group, which includes Russia, China and the Stans, is holding joint military exercises in conjunction with its summit in Bishkek:

The exercises, code-named "Peace Mission 2007", will be held in Chelyabinsk in Russia's Volga-Ural military district and in Urumqi, capital of China's Xinjiang Uyghur autonomous region. The SCO summit is scheduled to take place in the Kyrgyz capital Bishkek on August 16. After the summit, in a highly symbolic gesture, the heads of states and defense ministers of all SCO members - China, Russia, Kazakhstan, Kyrgyzstan, Uzbekistan and Tajikistan - will watch the conclusion of the joint military exercise in Urumqi. Asia Times, 8-4-07

The south to south oriented India-Brazil-South Africa (IBSA) initiative is gaining momentum in terms of both geopolitics and the global ecomony. Brazil's Foreign Minister Celso Amorim enumerates some of the IBSA's goals:

The (Jul. 17) joint communiqué issued after the (New Delhi) meeting of foreign ministers has some 100 points relating to trilateral issues. An important dimension of the relationship is the development of more and more joint projects in areas like health, transportation, agriculture and science and technology. These are being developed with the participation of the parliaments of all three countries and also with civil society. ... We are concerned about helping countries that are less developed than we are. ... The three IBSA countries are also closely cooperating with one another in international fora like the WTO and the UN. We are members of the G20 in the WTO. In the future, we could as a combination intervene in issues and in regions where we have influence -- in Africa, in the Middle East... It is difficult to predict what could happen. The world is today very different from what it was even 50 years ago. Inter Press Service, 8-3-07

And, unfortunately, China is proving, year after year, that capitalism and totalitarianism get along just swimingly. How will China use its power over the US economy? There are disturbing signs:

Two officials at leading Communist Party bodies have given interviews in recent days warning - for the first time - that Beijing may use its $1.33 trillion (£658bn) of foreign reserves as a political weapon to counter pressure from the US Congress. ... Described as China's "nuclear option" in the state media, such action could trigger a dollar crash at a time when the US currency is already breaking down through historic support levels. Telegraph, 8-8-07

In the 21st Century, you cannot have national security without economic security, and you cannot have economic security without energy security. But in the 21st Century, energy security is synonymous with sustainability. Therefore, security and sustainability have become uttterly interdependent. All over the world, scientists and engineers, backed by governments and business interests that understand this imperative, are laboring to bring forth solutions.

Using "a super fuel-efficient diesel engine and lithium-ion batteries that recharge every time the brakes are applied," the Japanese have debuted a new 180-million-yen train, which cuts power, noise and emissions by up to 60 per cent:

Japan is a world leader in the development of hybrid cars and low-emission buses and plans are already well advanced to run a hybrid tram in Tokyo. But a [Japan Rai] spokesman said it was “too early” to contemplate selling the E200 on the open market. “We’re still trying to modify and improve its performance,” he said. JR said that it wanted to make the E200 10 per cent more fuel efficient than conventional trains, but admitted that compared to standard diesel trains, its current prototype was expensive. “We think it is inevitable that we will have to spend money if we are going to save the environment,” the spokesman said. Independent, 8-1-07

Swiss engineers accidentally caused a 3.5 earthquake by drilling deep into the Earth's crust to tap its inner heat:

On paper, the Basel project looks fairly straightforward: Drill down, shoot cold water into the shaft and bring it up again superheated and capable of generating enough power through a steam turbine to meet the electricity needs of 10,000 households, and heat 2,700 homes. Scientists say this geothermal energy, clean, quiet and virtually inexhaustible, could fill the world's annual needs 250,000 times over with nearly zero impact on the climate or the environment. ... But there are drawbacks — not just earthquakes but cost. ... Also, rocks tapped by drilling would lose their heat after a few decades and new wells would have to be drilled elsewhere. Associated Press, 8-4-07

The purchase of Dow Jones by Rupert Murdoch's News Corp. is a significant development that should cause you profound concern.

At this crucial juncture in our history, just when the populace of the USA desperately needs to hear other, more enlightened voices, the relentless, near deafening drumbeat of Murdoch's corporatist propaganda machine -- which promotes the blind pursuit of short-term profit to the exclusion of all else -- is only going to get louder and more overbearing.

“Murdoch has a long and sordid history of discarding the accepted norms of honest journalism in order to advance his own political and corporate agenda,” wrote Eric Boehlert, a senior fellow at Media Matters in America, in a statement published on the progressive media watchdog group’s website. ... “Murdoch doesn’t practice journalism; he molds diverse media into a single voice. It’s a dangerous uniformity — threatening the democratic discourse a free press sustains as well as enabling wars by conniving with bellicose politicians,” wrote John Nichols in a report in the Nation magazine. Inter Press Service, 8-2-07

Toward years into the heat of the Information Age, and yet, it is increasingly apparent that governments and businesses have still not come to grips with the inherent risks and threats of cyberspace:

The Internal Revenue Service computer network is vulnerable to social-engineering hacks, with 60% of employees changing their computer passwords when requested by phone callers posing as help desk workers, according to a government auditor. ... Sixty-one of 102 IRS employees and contractors contacted in March and April agreed to change their passwords to ones requested by callers from TIGTA, posing as IRS help-desk workers. In the last test, only eight of the 102 employees contacted IRS authorities about the social-engineering attempt. Seventy-one percent of employees fell for a similar trick in August 2001, but only 35% fell for it in December 2004. TIGTA called the recent results "alarming" in a report ... IDG, 8-3-07

A pair of cyber thieves in Russia allegedly stole more than US $500,000
from Turkish banks over a two-year period. ... "The men purchased a dedicated server with remote access to a desktop hosted in a US data center, and a special application" that they used to infect Turkish online banking customers'
computers with a Trojan horse program. The Register, 8-2-07