GS(3) Thunderbolt 8-8-07: Walking Among the Somnambulists -- Neither Tyranny Nor Catastrophes Have Disrupted Their Dreamy Slumber -- Yet 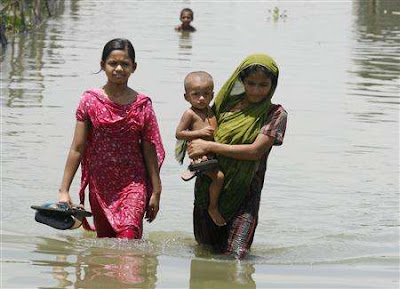 Hungry victims of South Asia's devastating floods have been reduced to fighting over food supplies and looting, officials said, with one teenager drowning as he scrambled for air-dropped provisions. Reuters, 8-6-07

GS(3) Thunderbolt 8-8-07: Walking Among the Somnambulists -- Neither Tyranny Nor Catastrophes Have Disrupted Their Dreamy Slumber -- Yet

Walking around one of the major metropolitan areas in the USA yesterday was a bizarre experience.

On the first day back to work, after Congress had dealt a serious body blow to the Constitution in general, and the Bill of Rights in particular -- there was little or no conversation in public places about what had happened.

Sen. Russ Feingold (D-WI) -- whose solitary resistance to the misnamed PATRIOT Act, and principled opposition to all that followed it, has been at once inspiring (because of its righteousness) and disconcerting (because of its unfortunate uniqueness) -- provides context for the latest attack on the Republic:

Six years ago, in the aftermath of 9/11, Congress rammed through the USA PATRIOT Act with little consideration of what that bill actually contained. Five years ago, Congress authorized a reckless and ill-advised war in Iraq. One year ago, Congress passed the deeply flawed Military Commissions Act. And late last week, a Democratic Congress passed legislation that dramatically expands the government's ability to conduct warrantless wiretapping, which could affect innocent Americans. It is clear that many congressional Democrats have not learned from those earlier mistakes, two of which happened when Democrats controlled the Senate. Once again, Congress has buckled to pressure and intimidation by the administration. Sen. Russ Feingold (D-WI), Huffington Post

Meanwhile, in India, Bangladesh and Nepal, 19 million people have been displaced by monsoon rains and flooding.

Yes, even as the Bill of Rights is being shredded in the USA, all across the world, the impact of global warming and climate change is beginning to take hold of events and warped human experience from here on out:

The world experienced a series of record-breaking weather events in early 2007, from flooding in Asia to heatwaves in Europe and snowfall in South Africa, the United Nations weather agency said on Tuesday.
The World Meteorological Organization (WMO) said global land surface temperatures in January and April were likely the warmest since records began in 1880, at more than 1 degree Celsius higher than average for those months.
There have also been severe monsoon floods across South Asia, abnormally heavy rains in northern Europe, China, Sudan, Mozambique and Uruguay, extreme heatwaves in southeastern Europe and Russia, and unusual snowfall in South Africa and South America this year, the WMO said. Laura MacInnis, Reuters, 8-7-07

The indifference to both crisis situations in the US mainstream news media, and by extension in the US populace it hypnotizes, is deeply disturbing.

Life is a oneness. Those who fail to grasp this truth rob themselves of much mystery, humor, beauty and love.

Here is an update from UNICEF via Relief Web on the catastrophe in South Asia:

For the past two weeks, South Asia has seen some of the worst monsoon flooding in its living memory. Across northern India, Bangladesh and Nepal, countless villages have been completed marooned, leaving tens of millions displaced and stranded.
In India, some 12 million people have been affected in Bihar and Uttar Pradesh, two of the worst-hit states. Hundreds of thousands are camped out on elevated highways, railway tracks and embankments.
Safe water, food and medicines are among the items most needed to help children and families cope. Government forces are now using helicopters to drop relief supplies, but they can only meet the needs of a fraction of the displaced population. ...
“I have been dividing one small piece of bread among four of my children, and I have been starving and yet somehow surviving,” said one sobbing mother to a local television reporter in Bihar. ... At the outset of the crisis, UNICEF distributed pre-positioned emergency supplies to more than 40,000 families in some 1,000 villages in Bihar. Included were 5,000 plastic sheets, 130,000 sachets of oral rehydration salts (ORS, used to treat diarrhoeal dehydration) and thousands of water-purification tablets.
“We need at this moment at least 1 million more sachets of ORS, not only to take care of the diarrhoeal cases, which are expected to rise, but also to prevent future disease outbreaks,” said Mr. Babille. Previous experience has shown that a lack of ORS can have grave consequences if waterborne diseases do break out, he noted.
More aid needed for tens of millions affected by severe monsoon floods in India, Kun Li, UNICEF, 8-6-07

If you can help alleviate the suffering of the people of South Asia, I urge you to give to UNICEF.

If you are concerned about the unremitting attack on the US Constitution and the Bill of Rights, I urge you to support the work of the American Civil Liberties Union.