Hard Rain Journal 8-17-07: Beyond Rove and Bush -- Brown Shirts or Solidarity? Who Will Triumph?

Image: Lech Walesa carried on the shoulders of Solidarity during the uprising against totalitarism in the East. 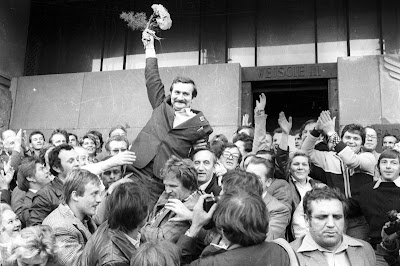 Karl Rove will be a guest this Sunday on Face the Nation, Meet the Press, and Fox News Sunday ... The media will be tempted to pick “Bush’s brain” for his views on the political horserace, on everything from the Democratic presidential candidates to Iraq to Bush’s veto threats. But they shouldn’t forget that Rove has yet to personally account for much of his sordid record in the White House. Here are a few of the issues that Rove needs to be asked about:
– Promoting the war as a member of the White House Iraq Group
– Leaking Valerie Plame’s identity
– Compiling the list of fired U.S. attorneys
– Politicizing government agencies
– Dealing with Jack Abramoff
– Violating White House email record-keeping rulesThink Progress, 8-17-07

Hard Rain Journal 8-17-07: Beyond Rove and Bush -- Brown Shirts or Solidarity? Who Will Triumph?

Important points not to overlook in the aftermath of Karl Rove's departure from the White House:

If you were handed a) the unflinching complicity of the US mainstream news media, b) a campaign finanace advantage of at least one hundred million dollars over your opponent, and c) control of the electoral process in a few critical Electoral College states (e.g, Florida and Ohio), you would look like a "genius" or a "mastermind" too.

I do not know what loveless place Rove grew up in, or what unhealthy influences warped his vision of the world, but it is hard to see him as anything other than a vicious dirty trickster and a seriously disturbed individual.

What is most impressive in his biography is not his array of skills or faculties, but what he was empowered to do with them -- first to produce false victories in 2000 and 2004, and then pervert the engine of the US federal government itself to the sordid ends of the Bush-Cheney cabal and its enablers in the Cult formerly known as the Republican Party and its corporatist sponsors, especially in energy, pharmaceuticals, insurance, tobacco and media.

Even though he is far from finished, and apparently in no imminent danger of prosecution, it is very good that he has fled the White House.

The investigations of Sen. Patrick Leahy (D-VT) and Reps. John Conyers (D-MI) and Henry Waxman (D-CA) have already uncovered much more than Rove and his co-conspirators ever wanted you to know about what he was up.

He will write his book, and it will receive disproportionate and overly accommodating attention from the US mainstream news media. He will involve himself the 2008 campaign, and no doubt inflict new damage on progressive candidates and on the electoral process itself. But he will also be fighting subpoenas, contempt of Congress charges, and eventually, if there is any justice left, at least one criminal probe. (Until he is pardoned, of course.)

As Bush, Rove and Cheney twist and turn in the noose of the political rope that they strung themselves up with -- and assuming that there is no new 9/11 to provide them another reprieve (it is extraordinary that the people who once wished for a "second Pearl Harbor" now wish for a "second 9/11") -- the bigger issue is what abominations lurk out there beyond this illegitimate, incompetent and corrupt regime?

The possibilities are chilling.

Consider the precedents that have been set.

What will the next front man for the vast reich-wing conspiracy -- after all, it is existed before Bush-Cheney co-opted it, and it still exists -- do with all of the executive power that has been amassed in these last several years?

What will the USA look like if crimes such as the betrayal of a US secret agent's covert status (Valerie Plame) or the murder of a US special forces commando who happened to be a media celebrity and a dissident (Pat Tillman) go unpunished?

What will the USA look like if perjury in Senate testimony and brazen defiance of congressional subpoenas go unpunished?

What will the USA look like if show trials and false imprisonment for political adversaries (e.g., former Alabama governor Don Siegelman) and leniency for made-men (e.g., I. Lewis Libby) become the norm?

Unfortunately, the national debate over the next year and a half will not center on what is needed most (even more the health care or an end to the occupation of Iraq, because it would insure both and a whole lot more):

Media reform, e.g., breaking up the corporatist stranglehold on journalism;

A radical and urgent energy paradigm shift away from fossil fuels, e.g., setting a date certain for a ban on the manufacturing or importing of any vehicle that is not at least a hybrid.

Nevertheless, it is not too late to save this country, and to participate in saving life as we know it on this planet.

Remember what happened in Gdansk, Berlin and Moscow during the collapse of the Soviet empire.

The USA doesn't need a second revolution, it simply needs to embrace its own Evolution.

Sinclair Lewis was right about fascism, of course: it can happen here, and arguably has happened here. But what happened in Gdansk, Berlin and Moscow can also happen here.

Who will be our Lech Walesa?

Who will be our Gorbachev?

Who will be our Vaclav Havel?

Whoever they are, they will need you surging to the polls, on the Internet, and yes, before it ends well, in the streets.