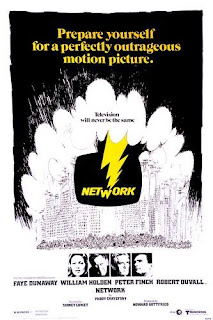 There is a profoundly disturbing symmetry between Rupert Murdoch's recent purchase of the Wall Street Journal, and General David Petraeus' granting of an exclusive interview to Fox News following his testimony to Congress. It is a glimpse into a harrowing future.

If you are reading this post, you probably haven't referred to the TV Guide for many years. But its archives stand as a document of record for the dumbing down of the American people; first, with sitcoms and cop dramas, then with Reality TV and tabloid-style infotainment.

For years, the psyche of the nation was caught in pincers between the mesmerizing narcotic of TV, pressing on its eyeballs, and the hate speech radio of Limbaugh, et al, ringing in its ears.

Forget the separation of church and state, forget the commons, forget all of the good that the union movement brought to our way of life, forget it all ...

But, of course, dumbing down wasn't sufficient. Clinton and Perot proved that in the 1990s. The American people still had some common sense and some spine left.

So bring on Fox News, and by extension, the shell of itself that the post-Turner CNN turned into as it frantically tried to stay competitive.

Flush with the infusion of Murdoch's cash (it didn't matter how many years Fox News lost money; psyops is cheap at any price, if it is done right), Fox's mission was to turn the dumbed down public xenophobic and reactionary, and it succeeded -- until, finally, the force of history, the force of Nature, and the force of human evolution, caught up with Fox's deceitful narrative, and it lost credibility with much of the populace.

So now, the scene has turned very nasty.

On the 2006 remembrance of the 9/11 attacks, instead of the issue being why is this man still alive and free to call for more slaughter, ABC was telling the sheeple it was Clinton's fault.

And on the 2007 remembrance of the 9/11 attacks, instead of the issue being why is this man still alive and free to call for more slaughter, Fox and its weak-kneed sisters at CNN and PBS, are smearing the progressive movement with the bloody brush of Bin Laden:

The [four] guests and co-host Sean Hannity work towards connecting bin Laden's speech to the current tone among the Democrats. ...
"He's taunting America again," says Card, "... and I can't believe that there are people in Congress that will actually follow the direction of a sworn enemy of this country rather than take the direction of the person sworn to defend the country, the President of the United States." Raw Story, 9-8-07

... CNN Justice Correspondent Kelli Arena compared bin Laden’s tape to the writings of an “angry blogger”: ... At times he comes off like an angry blogger chastising Americans for electing President Bush twice and the Democrats for not doing more to stop the Iraq war. Think Progress, 9-8-07

... the New York Post published an editorial equating Osama bin Laden and his recent video tape with MoveOn.org: If Osama bin Laden ever gets tired of waging global jihad, perhaps he should interview for a job with MoveOn.org. ... rambling rhetoric indistinguishable from the latest “netroots” rant.
Think Progress, 9-10-07

... on PBS’ The NewsHour, New York Times columnist David Brooks compared 9/11 mastermind Osama bin Laden’s latest video message to “lefty blogs,” saying the al Qaeda head is like “one of these childish people posting rants at the bottom of the page.” Think Progress, 9-8-07

Nor is this cycle of smear the first one --

Bill O'Reilly once again attacked Media Matters for America and MoveOn.org, calling the two organizations "the most vicious element in our society today" and referring to their staff as "assassins." Media Matters, 9-6-07

... on Fox News Sunday, Weekly Standard editor Bill Kristol attacked the Democratic presidential candidates for their decision to attend the YearlyKos blogger convention. ... Every Democratic presidential nominee is going to the DailyKos convention,” said Kristol. “That’s the left-wing blogger who was not respectable three or four years ago. The Howard Dean kind of sponsor. Now the whole party is going to pay court to him and to left wing blogs.”Think Progress, 7-22-07

Bill O’Reilly ... who has encouraged terrorists to target San Francisco is now claiming that DailyKos is “one of the worst examples of hatred America has to offer. O’Reilly went on to compare the YearlyKos blogger convention to “a David Duke convention” while calling DailyKos “hatemongerers” like “the Ku Klux Klan” and “the Nazi Party.” Think Progress, 7-17-07

Yes, in their eyes, you and I are the enemy.

Throughout the 1990s, I was declaring, "It's the media stupid!" There was next to nothing to turn to seven years ago, and then there was Buzzflash, which has been a bastion of the Internet-based information rebellion from the beginning. We had to generate our own news streams. But now, there is a movement, and an infrastructure however vulnerable. Think David v. Goliath.

Now the US collective psyche is fragmenting. The massive mind control system is breaking down. To a large extent, the media moguls have lost control of the narrative, and so has the political establishment of Beltwayistan. The Internet, podcasting, progressive talk radio, viral video, etc., have all landed heavy body blows.

In the 1990s, a new generation of grass roots organizing started with MoveOn -- in response to the "vast reich wing conspiracy" and its Hunting of the President. In 2000, this grass roots movement took another giant step with the Howard Dean campaign, and Dean's subsequent "50 state" strategy as the Party's chairman.

But grass roots organizing alone is not be enough.

Investigative reporting, largely killed out in the US mainstream media after Watergate and Iran-Contra, has been reborn in cyberspace. And the country owes what it knows about the danger of the electoral process in general, and the theft of the 2000 and 2004 presidential elections in particular, to Mark Crispin Miller, Brad Friedman, and others who would not have been heard without the progressive blogosphere.

But there is a still desperate need for an ever-expanding echo chamber to make an even louder noise, and reach even more people, so now I say, "It's the air waves, stupid" (or at least the stream).

One show on one cable news network (Keith Olbermann's Countdown) and two shows on Comedy Central (Jon Stewart and Stephen Colbert) are not enough.

A broad range of audio and video offerings from Air America Radio and NovaM to Al Gore's Current TV to Robert Greenwald's Brave New Films to Amy Goodman's Democracy Now! (via satellite and TIVO) to the beautific anarchy of countless people utilizing YouTube itself are all helping to shape a 21st Century alternate news media paradigm; and in the process, they're pumping out the truth, and delivering diverse perspectives on the realities of our time.

And now, GoLeft TV has arrived to push the envelope even further.

You can turn to GoLeft TV 24x7 for insightful news and analysis, emboldening commentary and refreshing satire. It is a vital resource.

The progressive movement is on the offensive, and gaining ground. Keep leaning forward.