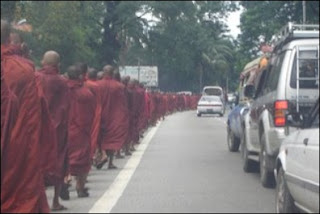 What the Burmese Monks Chant in the Streets: This is what should be done by one who is skilled in goodness, and who knows the path of peace:
Let them be able and upright, straightforward and gentle in speech.
Humble and not conceited, contented and easily satisfied.
Unburdened with duties and frugal in their ways.
Peaceful and calm, and wise and skilful, not proud and demanding in nature.
Let them not do the slightest thing that the wise would later reprove.
Wishing in gladness and in safety, may all beings be at ease. Metta Sutta (Buddha's Words on Kindness)

The confrontation in Burma is of great significance on numerous levels.

For the Burmese people, the padlocked door on the heart of the nation has been burst open. It may be impossible to seal that passageway again.

As a global event, it is a poignant cry for fundamental human rights, including free speech and economic security.

And for those of us in the USA who have struggled for the last seven plus years against the systematic dismantling of our republic, it is a disturbing glimpse into a possible future.

Here is an update --

The way was barred, preventing a second visit to Aung San Suu Kyi.

The protest is swelling.

Buddhist monks have led at least 100,000 protesters through the streets of Rangoon on Monday. The demonstration began at noon at Shwedagon Pagoda and covered at least 8 km (5 miles) in its first few hours, passing by the old campus of Rangoon University, a hotbed of protest in times past. Students, artists and members of parliament who were elected in 1990 were seen joining in Monday's march, witnesses said Irrawaddy, 9-24-07

Therefore, the danger of a brutal crackdown is increasing.

Of the three most likely options—the protests gradually fading, a peaceful revolution to topple the regime and a harsh crackdown—so far the latter seems, sadly, the most likely. Economist, 9-24-07

Burmese activists are praying for the best, and preparing for the worst.

Despite our deepest hopes for a peaceful resolution to the current situation, now is the time to prepare in the event the military leadership orders another unspeakable action against the protesting monks and nuns, or against civilians:
• First, while there's still a chance, efforts should be taken to prevent a brutal suppression against the monks and people: Urge China, India, Asean, the European Union and the UN to send strong messages to the military junta to refrain from violent suppression of the protesting monks and nuns in Burma and to expect serious international actions if such suppression is carried out.
• Train people along the protest paths on first aid. People need to become familiar with first aid responses to muscle cramps, exhaustion, gunshot wounds, internal injuries, eye injuries, tear-gas injuries, fractures, injuries from high-pressure water cannons, dog bites (in case canine units are used), and other consequences of violence. Equip them with adequate first aid kits (international agencies should make kits available) and establish necessary support from health professionals.
• Prepare for triage services. Shelters for triaging the wounded should be identified early. Prepare for timely referral to appropriate health facilities for the seriously wounded—including plans for transportation, health workers and security in treatment areas.
• Prepare how to prevent monks and nuns from suffocation in case they are put into crowded vans.
• Stock appropriate medical and surgical supplies at local, township and district hospitals and clinics in the event of mass casualties. Authorize clinic/hospital staff to provide necessary care for wounded people without having to fear punitive actions by the military (this should be assured by the Ministry of Health and UN agencies).
• Provide ways and means to continue care for the wounded whether they are discharged from the health facilities or put into jails.
• Neighboring countries should be prepared to provide necessary health and social assistance to displaced populations who might seek refuge in the border areas.
Saw Lin (psuedonym for Burmese doctor), Irrawaddy, 9-24-07